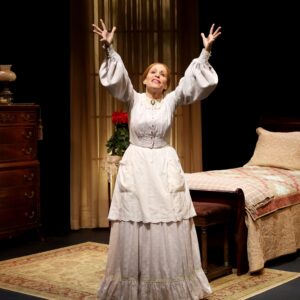 Margery Lowe appears as Emily Dickinson in a co-production of The Belle of Amherst.

For the second time in less than three years, award-winning South Florida actress Margery Lowe will portray poet Emily Dickinson onstage. However, this time around, Lowe prepared for the part from scratch. It was as though she’d never played the renowned, mysterious writer from Massachusetts (1830-1886).

True, Lowe embodied the enigmatic artist for a Palm Beach Dramaworks production of Joseph McDonough’s comic fantasia, Edgar & Emily in April 2018. But that play wasn’t really about Dickinson or writer Edgar Allan Poe, Lowe said. Instead, McDonough’s broad and comedic piece explored what might happen if two artists – any two artists – met in real life. Dickinson and Poe just happened to be the characters that McDonough wrote about.

By contrast, The Belle of Amherst, the 1976 one-woman play by William Luce in which Lowe will star this April in a filmed co-production between Dramaworks and Actors’ Playhouse at the Miracle Theatre in Coral Gables, is all about Dickinson. Specifically, it paints a portrait of the 19th century writer based on her poems, letters, and notes. And so, Lowe read them. Now, Lowe said she hasn’t read all of the almost 1,800 poems. But she did read about a couple hundred.

Based on her research, Lowe, a red-headed with a radiant smile and personality, said the co-production’s intention is to “shatter the image of (Dickinson) as a recluse.” While that word might spring to mind when people hear Dickinson’s name, Lowe said she doesn’t believe that the writer was one.

“Absolutely not,” she said. “She chose to dedicate her life and every waking moment and hour to her words.”

But in the 1800’s, when The Belle of Amherst takes place, society tended to frown on women ahead of their time who never married, Lowe noted. As a result, she feels that Dickinson chose not to go out in public.

But people visited Dickinson. In fact, in The Belle of Amherst, audience members play visitors to Dickinson’s Amherst, Mass. home. The action moves back and forth through the years from 1845 to 1886.

“You get the greatest hits of Emily Dickinson,” an enthusiastic, charming Lowe said. She added that in the play, the poet recites from more than 60 of her pieces.

Lowe admired Dickinson’s dedication to her craft. The performer noted that those in power in the field published only seven of her poems.

“She didn’t even know she’d be writing (her poems) for anyone to read,” the actor said. Still, Dickinson produced poem after poem.

So, what did she write about?

“Like most writers, Emily Dickinson wrote about what she knew and about what intrigued her,” according to emilydickinsonmuseum.org. “A keen observer, she used images from nature, religion, law, music, commerce, medicine, fashion, and domestic activities to probe universal themes.”

Specifically, those themes include the wonders of nature, the identity of the self, death and immortality, and love.

“Sometimes with humor, sometimes with pathos, Dickinson writes about her subjects,” notes the museum’s website. “Remembering that she had a strong wit often helps to discern the tone behind her words.”

In The Belle of Amherst, Emily is “full of life and humor and charm,” Lowe said. She added that the character is full of wit and “very mischievous.”

Dickinson and Lowe share similarities. For instance, the poet had red hair, and so does Lowe. Dickinson stood more than five feet tall, as does the performer. What about personality wise?

“I’d like to think that I have her determination and her passion and her love of life,” Lowe said.

“Margery is a lovely actress, and she has a great warmth onstage,” he said. “She’s an interesting combination of maturity and youthfulness in her performances.”

And Palm Beach Dramaworks Producing Artistic Director William Hayes, who is directing the taped co-production, said he is confident that Lowe will shine.

“Having seen Marge embody Dickinson in a very different play, and having developed a professional bond over 15 years and numerous productions, I know she has the range, the skill set, and the artistry to pull this off brilliantly,” Hayes said.

She’s been brilliant in other productions as well. For example, within the South Florida theater community, Carbonell judges have nominated Lowe many times for Carbonell Awards. The Carbonells recognize excellent theater in South Florida. The awards’ namesake is sculptor Manuel Carbonell. He designed the bronze and marble award that judges present to winners.

Lowe’s career has taken her well beyond South Florida. For instance, she served as a company member of the famed Stratford Shakespeare Festival in Canada. As a company member, Lowe received the Tyrone Guthrie Award. The honor’s namesake is the festival’s first artistic director. In addition, Lowe performed in New York and across the country in various national tours. Also, she’s taken the stage at Lincoln Center, the Kennedy Center, The Muny, Canadian Stage, the Fox Atlanta, Theatre Off Park, Sanford Meisner Theatre, Shakespeare Theatre of Maine, Kansas City Starlight, Stages St. Louis, Maine State Theatre, Stage West, and many others.

A teacher in high school introduced Lowe to Dickinson. She said she connected personally to her poems; she felt as though Dickinson was speaking to her, like an understanding friend. That was part of the poet’s gift, Lowe said. What does she like most about Dickinson? The poet’s wit.

“She’s hysterical,” Lowe said. “She reminds me of Puck from A Midsummer Night’s Dream. You just fall madly in love with the woman. And she is so deeply passionate about life.”

Lowe said it’s easy to feel a sense of hope when you read Dickinson’s work. And that is true even when she’s writing during her darkest hours.

Playing Dickinson is challenging, Lowe said. First, during the roughly two-hour play, an actor must maintain stamina. The piece is a “real roller coaster ride of emotion,” Lowe said. It’s also challenging because audiences might have images of Dickinson stuck in their mind coming into The Belle of Amherst. Theater lovers of a certain age may remember the play from Julie Harris’ Tony Award-winning turn as the poet in 1976.

“You say the name of the play and they say ‘Julie Harris,’” Lowe said. She added that she didn’t watch a tape of the play because she wanted her performance to be fresh.

After they see the play, which a crew has filmed on Palm Beach Dramaworks’ stage, Lowe said she hopes people will view Dickinson as a woman who, even in hardship, found love “in the simplest of things.”

“Emily Dickinson is the queen of mindfulness,” the performer said. “You can learn from her how to appreciate life” in the smallest details.

You don’t have to be an Emily Dickinson fan, or even know who she was, to walk out of the play having learned such lessons, according to Lowe.

“I wish she was alive today, just for a moment to know how much she touched so many people’s lives,” Lowe said.

And she hopes to continue bringing Dickinson alive for more audiences after the pandemic.

“I pray that I will one day get to do it for a live audience,” Lowe said.

People can view online The Belle of Amherst at their convenience any time from April 2-6. Tickets are $30. All proceeds will benefit Actors’ Playhouse and Palm Beach Dramaworks (PBD), supplying much-needed revenue at a time when the theaters are earning no income. You can purchase tickets through PBD’s website at www.palmbeachdramaworks.org, or by calling the box office at (561) 514-4042, ext. 2.

Lowe shines as poet in ‘The Belle of Amherst’