Lowe shines as poet in ‘The Belle of Amherst’ 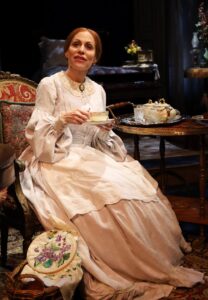 Award-winning actor Margery Lowe shines as Emily Dickinson in ‘The Belle of Amherst.’

If you search Emily Dickinson on Google, one of the photos you’ll find is that of an austere-looking woman dressed in black. The famous poet from Amherst, Mass. (1830-1886) appears to be a no-nonsense, severe woman, rigid in her thinking.

But the Emily Dickinson one encounters in William Luce’s one-woman, 1976 Broadway play, The Belle of Amherst, couldn’t be more different. Indeed, she is charismatic, playful, even mischievous. And, unquestionably, she is an extrovert. Luce’s “Belle” shatters images people might have of her as a natural loner. And in a current co-production by a pair of southeast Florida professional, nonprofit theater companies, Margery Lowe shines as a fun-loving, romantic Dickinson.

It’s nearly impossible not to fall in love with Lowe’s Dickinson. Chances are, you’ll want to embrace her – just as she embraces life. More than once, this smiling, charming “Belle” spreads her arms as wide as she can. It is as though she’s about to wrap life in a bear hug.

“Everyone of you to me is a poem. Each one a rare creation,” Dickinson adoringly tells us.

We, the audience, are adult visitors to her Amherst, Mass. home. It is 1883, three years before the poet’s death at 56. Scenic designer Michael Amico has designed with detail a spacious, homey, and inviting residence. It features bright, multicolored rugs, brown furniture, red roses, and family photos. Also, the set includes period details. They include ink for a fountain pen and period lamps. Dickinson, sporting an appealing full-length white period dress with an apron over it (Brian O’Keefe designed the period costume) warmly invites us into her world.

When the play opens, Dickinson is 53. However, judging from her youthful verve, the pep in her step, and her playfulness (Lowe has said that Dickinson reminds her of Puck, from Shakespeare’s A Midsummer Night’s Dream) we might mistake her for a Belle in her late teens or 20’s. Actually, the play shifts between time periods. It makes sense, given Dickinson’s tendencies, as Luce has written her.

“My sister, Lavinia – she’s younger than I – she says I tend to wander back and forth in time,” Dickinson tells us. “So, you must bear with me.”

At the beginning of the play, Lowe’s Dickinson walks out onto the stage confidently. Then, she suddenly stops. She slowly looks around, hesitant, shy, and noticeably uncomfortable. She rapidly blinks her eyes. It’s true, she’s not used to being around people. However, Dickinson hasn’t isolated herself for the reason that we might think. Soon, a smile slowly spreads over Dickinson’s face. It becomes clear that, while she may not be used to hanging around people, it’s hardly a completely foreign experience to her. She’s won people over before, and she will win these visitors over as well.

“Welcome to Amherst,” Dickinson tells us, in a warm, enthusiastic whisper.

From that point on, with winning charm, amusement, and charisma, Dickinson takes us into her world. For instance, we learn about her neighborhood, her love of nature, her school days, her courting days, her struggles with religion, her attempts to publish her poems, her views about life and death, her love of nature, and her family.

Dickinson, as Lowe portrays her, avoids speaking with bitterness about her strict, austere lawyer father. Bitterness does not seem to be one of this “Belle’s” traits. Rather, she often sighs, with resignation, at the thought of something unpleasant before speaking about it. And she laughs, softly and fondly, with a nostalgic sigh, while recalling happier times. Clearly, she loved her father, regardless of his faults. More than once, she places her hand on her heart while speaking lovingly of one of her dear ones.

It’s no surprise, then, that Dickinson chokes up with emotion when she talks about a tragedy that has befallen a dear one. For instance, with her voice shaking, and full of authentic emotion, this “Belle of Amherst” chokes back tears as she informs us of her “master’s” death (a man she courted). And, in a manner that’s admiringly natural, she takes a moment to compose herself.

Portraying Dickinson, as Luce wrote her, is not easy. For one thing, the performer is onstage throughout the play’s roughly two-and-a-quarter hours. Further, the actor must credibly convey feelings and emotions such as charm, warmth, mischievousness, nostalgia, sorrow, youthfulness, maturity, eagerness, assertiveness, nervousness, joy, and wonder. Sometimes, the script calls for the performer to segue quickly and seamlessly from one feeling to another. At other times, in Luce’s touching and funny script, Dickinson experiences emotions that are Shakespearean in size.

In all this, Lowe succeeds masterfully.  Clearly, she is a master performer at the top of her craft, playing a character with jaw-dropping naturalness, spontaneity, and nuance. She inhabits Dickinson with an ease that you just can’t teach. Each sniffle, smile, sigh, gesture, expression, and utterance sounds and looks as though Lowe were saying or doing it for the first time.

As part of Palm Beach Dramaworks Producing Artistic Director William Hayes’ sensitive, detail-oriented direction, he has given Lowe actions to perform with her hands. And so, Dickinson talks to us while performing these actions. This enhances the natural quality of her performance. Also, Hayes and Lowe have come up with appropriate gestures to accompany Dickinson’s words. For example, at the beginning of the play, the poet notes that she’s 53. As she says this, Lowe frowns, as women often might when disclosing their age. Also, gently placing her hand on her heart is an appropriate way for Dickinson to accentuate a loving comment.

Fortunately, Lowe doesn’t sit or stand in one place for too long. Rather, Hayes, at times, has her on the move, changing positions and actions, obviously to ensure variety.

Hayes and Lowe have worked together on productions for more than 15 years. Certainly, such familiarity had to help make this production a success.

So, too, did Roger Arnold’s sound design, with clear and seemingly authentic effects. And Kirk Bookman’s varied lighting design is, at times realistic, and at others, shadowy, perhaps suggesting nonrealism. Such a contrast proves beneficial in differentiating flashbacks and present-day scenes (i.e. 1883, when Dickinson is 53).

In a preface to his script, playwright Luce wrote that he hoped to depict Dickinson’s humanity and “reasonableness” (i.e. her conscious choice to be a “voluntary exile from village provincialism”). And indeed, Luce poetically depicts both with sensitivity and focus. Certainly, his play is not a tell-all biography. Nor is his play a vehicle in which to depict Dickinson as a Saint. Rather, he highlights her humanity, faults and all. For instance, at one point, we learn that Dickinson courted more than one married suitor.

Similarly, The Belle of Amherst isn’t without faults. For instance, Dickinson never tells us why she is so driven to write poetry, or about her process as an artist.

Regardless, In The Belle of Amherst, you’ll likely fall in love with Dickinson soon after the play’s opening words.

Certainly, she didn’t hurt her cause to win over her “visitors”  by offering them her recipe for her “Black Cake.” Be sure to have pen and paper handy. And some tissues.

People can view The Belle of Amherst online at their convenience any time through April 6. Tickets are $30. All proceeds will benefit Actors’ Playhouse and Palm Beach Dramaworks (PBD), supplying much-needed revenue at a time when the theaters are earning no income. You can purchase tickets through PBD’s website at www.palmbeachdramaworks.org, or by calling the box office at (561) 514-4042, ext. 2. 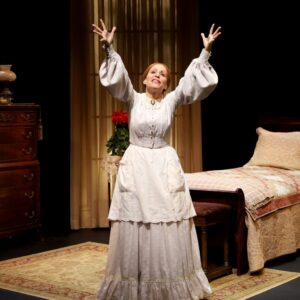 Photo courtesy of Palm Beach Dramaworks and Actors’ Playhouse at the Miracle Theatre.

Margery Lowe appears in a scene from ‘The Belle of Amherst.’