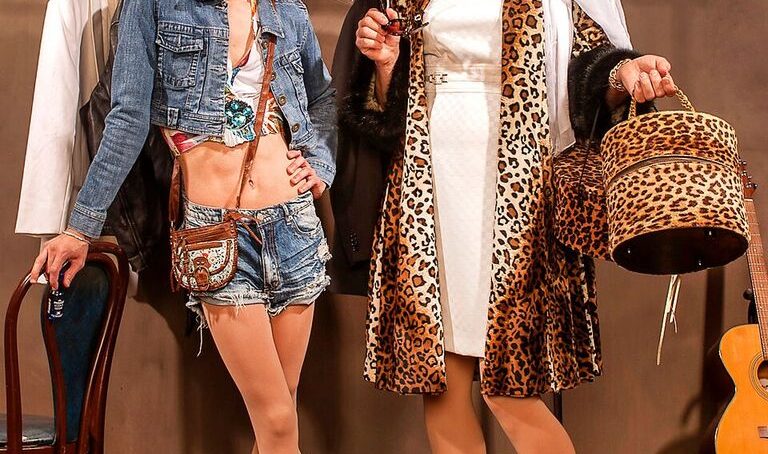 This lighthearted ‘Legend’ will whisk you away from your worries 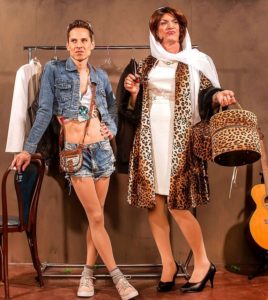 CORAL GABLES, Fla. Go ahead, poke fun at drag queens all you want. Call them weirdos, freaks or any other name to express your disapproval at their lifestyle or your inherent dislike of them, for whatever reason. The bottom line is that at least twice now in the make-believe world of theater, drag queens have proven to be career savers as they’ve come to the rescue of characters in dire need.

We’ve seen that in the 2013 Tony-Award-winning Broadway musical Kinky Boots (which is based on a true story) and now we witness it in Matthew Lopez’s empowering, lighthearted comic treat The Legend of  Georgia McBride.

The latter is receiving its Southeastern premiere in a vivacious laughfest of a production put on by GableStage at the Biltmore in the suburban Miami city of Coral Gables.

As is true in Kinky Boots, we meet a central character who never in his wildest dreams thought a drag queen would vastly improve his financial situation.

Casey is an Elvis impersonator in a dilapidated night club bar in the Florida Panhandle. He’s nearly penniless and faces eviction from his rented apartment, along with his wife, Jo. Casey’s not exactly selling out the house with his Elvis act, regardless of his talent. Drag queens are faring better and the club’s moody manager/MC, Eddie (an at-times flustered, at-times exuberant Dave Corey) has taken notice.

Then one of them injures him/herself while in a drunken stupor – and Casey’s life is changed forever.

But this is hardly 42nd Street, in which the leading lady gets injured and the green, but ever enthusiastic new girl on the block jumps for joy at the chance to shine in the spotlight. The last thing Casey wants to do is fill in for, much less become, a drag queen. But a man’s got to do what a man’s go to do to feed the family and keep a head over their roof. If that means becoming a woman, so be it.

The Legend of Georgia McBride is, at times, unapologetically risqué, with highly suggestive language. There’s an air of toughness and defiance in this play.

“Drag is a lot of things, baby, but drag is not for sissies,” explains drag queen Rexy (a narcissistic, arrogant Sean Patrick Doyle who, along with wearing one of Ellis Tillman’s glittering, inventive and character-defining costumes, puts on superior airs). “Drag is a protest. Drag is a raised first inside a sequined glove.”

As is true in Kinky Boots, two characters who never thought they’d meet in life find they have more in common than they originally thought. The act of bonding and finding commonalities with people we consider different seems especially important in these divisive times.

In Lopez’s play, Casey and drag queen Tracy Mills (an elegant, encouraging and spirited Tom Wahl) find such a similarity.

“Look, I know this is the last thing you thought you’d ever end up doing,” Tracy tells Casey after he’s taken over for the drunk and injured Rexy. “Well baby, this is not exactly the town I thought I’d ever end up playing. Yet here we both are: a straight man in drag and a drag queen in hell. The only place for us to go from here is up. And the only things holding us back are the limits of our imagination.”

We learn about Rexy’s indomitability through a past incident she relates. She’s the only character playwright Lopez reveals any background information about.

Still, the play has things to say about perseverance, trusting your gut instincts, forgiveness, finding the essence of who you are and the importance of reaching outside your comfort zone.

The Legend of Georgia McBride is largely a light-hearted, escapist play – not nearly as meaty, serious or original as the talented Lopez’ celebrated, widely-produced, award-winning “The Whipping Man,” about a wounded Confederate Jewish soldier being tended to by his former slaves and old wounds (emotional and physical) coming to the surface. There’s plenty of irony in that taut, engrossing drama.

There’s also a tinge of irony in Georgia McBride. For Casey, it took portraying a woman for him to become more of a man.

The Legend of Georgia McBride celebrates the power and satisfaction of transformation and performing. A particularly poignant passage toward the end of the play illustrates how acting can not only offer an escape, but perhaps improve the actor as a person as well.

The topic of transformation is reinforced through the numerous costumes Tillman has designed, as well as Lyle Baskin’s wide, versatile set, which easily changes from the nightclub to Casey and Jo’s apartment to dressing rooms.

In addition to Wahl’s quirky yet thoroughly convincing performance as Mills, Clay Cartland excels as Casey/Georgia. The actor playing the role must be versatile, from nailing Elvis’ moves to capturing the many emotions Casey experiences throughout the course of the play. He must also gradually and convincingly demonstrate the improvement Casey makes as he develops his drag queen persona.

Cartland seems up to the task. He’s created a charming and likable and well-meaning Casey and Georgia.

The production’s major weakness comes in the beginning. As Jo, Jade Wheeler’s reactions to developments aren’t nearly strong or convincing enough. She needs to register more shock, for example, at the news that she’s pregnant and that Jo and Casey are being evicted from their apartment for their inability to pay rent. Wheeler is too tentative in the early going, but her performance grows stronger as the production progresses.

Under Joseph Adler’s astute direction, the production progresses at a rapid pace, grabbing our interest and not letting go. Adler finds the poignancy and the comedy in the piece.

The Legend of Georgia McBride might lack depth, but you may walk out of the theater with a renewed desire to become acquainted with someone different than you or view yourself or others in a different light.

The Legend of Georgia McBride continues through June 25 at GableStage at the Biltmore, 1200 Anastasia Ave., Coral Gables. Performances are 8 p.m. Thursday through Saturday as well as 2 and 7 p.m. Sunday. Two additional performances, 2 p.m. matinees on June 17 and 24, have been added due to popular demand. For tickets, call (305) 445-1119 or visit www.gablestage.org.