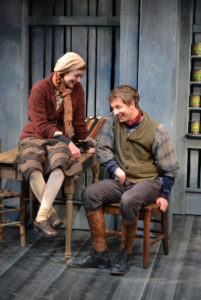 WEST PALM BEACH — If he were a real person, Johnnypateenmike O’Dougal would never win a “Citizen of the Year” award.

He talks incessantly, regardless of whether anyone in the room wants to hear his babble. He’s a self-centered, rude, loud, crotchety, curmudgeon.

Picture an individual walking into a community newspaper or other shop and annoying the wits out of everyone with his incessant loud prattle, disrupting the work day. That’s O’Dougal, a familiar type of person to anyone who’s ever lived in a small town. Call him the small-town eccentric.

Oh, and did we mention he’s  trying to kill his elderly, bedridden mother by drowning her body with alcohol?

Still, we’re somehow endeared to him. Renown Irish playwright Martin McDonagh has the talent to make us care about such characters.

Welcome to the world of McDonagh, whose characters and dialogue can make us laugh just as we’re squirming in our seats or sitting still in shock, our mouths open to the floor.

The young, renown and immensely talented playwright’s characters are colorful, to say the least – and many will no doubt argue despicable.

Palm Beach Dramaworks’ first-rate production of The Cripple of Inishmaan is playing through June 4, complete with authentic-sounding Irish accents and directed with an equal mix of pathos and dark comedy by J. Barry Lewis.

These actors, who manage to speak in this accent and make themselves clearly heard, have  found the humanity in the eccentrics populating the play so that somehow we become endeared to them — yes, even O’Dougal, played by Colin McPhillamy. The actor finds the right balance between convincingly conveying his character’s oddities and keeping him from turning into a caricature.

In the case of O’Dougal, that’s a particularly difficult task, especially considering his murderous mission for his “Mammy.”

McPhillamy, looking like a peddler (Franne Lee designed the character-defining, period costumes) proves up to the task of playing this oddball character; he doesn’t beg for laughs, but portrays him truthfully and lets the humor come across organically through his outrageous comments and seemingly endless prattle. McPhillamy’s O’Dougal speaks in a sing-songy voice that grows coarse and seems to fill the room, as though O’Dougal’s the only one in the world who matters.

McDonagh is known for his wicked, crude humor and that comes across clearly in O’Dougal’s bitter interactions with his mother (a spunky, sharp-tongued Harriet Oser).

At its core, the tragicomic The Cripple of Inishmaan is about striving for acceptance, meaning and love on a dark, desolate island on Ireland’s west coast. During the year the play takes place (1934) “there was no ferry service or air transportation to and from the mainland,” according to information about the play written in the program by writer Sheryl Flatow. “A trip to Galway, the nearest city, was a day-long adventure over unpredictable waters. It was a harsh life, with little to distract from the tedium and the struggle of day-to-day existence.”

There are obvious echoes of Beckett (another playwright comprising the long, storied tradition of Irish theater) in this play. Specifically, Beckett’s existential classic Waiting for Godot springs to mind.  Take the central character, Billy, an orphaned, crippled young man by birth who is waiting for his own “Godot.” He’s jeered by the island’s inhabitants (they call him “Cripple Billy”) and he no doubt wonders what he has to live for. When he’s not in his aunts’ grocery store, he stares at cows.

But unlike the tramps in Beckett’s play, a potential “Godot” arrives for Billy in the form of an American filmmaker. That person has descended upon the neighboring Aran island of Inishmore to make a movie. You can imagine the excitement Billy feels at the prospect of meeting the man and going to Hollywood to possibly get a part in the film.

In order for us to care about Billy, he cannot come across merely as a morose, brooding, self-pitying young man who’s angry at God for making him the way he is. Fortunately this is never the case with Adam Petherbridge’s spirited, charming Billy, who is quick to smile and laugh at something funny and stand up for himself. This Billy, while he sounds melancholy and defeated at times, has spunk and will fight for his dignity. As Billy, Petherbridge will break your heart just as he’ll win you over with his bright smile and cheery demeanor. He’s also thoroughly convincing as a handicapped individual, contorting his right arm, managing to keep it in that awkward position and limping without any indication of the non-crippled actor.

There’s a constant tension in this production between darkness and light, dreariness and hope. That tension is manifested, in part, through Paul Black’s lighting design. The lighting is shadowy and concentrated closely on the actors. Black concentrates the brightest lighting on the immediate area where the actors are positioned. Outside that area, darkness reigns. This contrast can symbolize the characters’ hopes of leading a better life against the dreary environs. Still, the darkness is so close, almost swallowing the playing space, except a relatively small area. The implication: Hope is short-lived on Inishmaan, which is deftly depicted in scenic designer Victor Becker’s bleak, grey, steely, unforgiving unit set, reinforcing the grim atmosphere on Inishmaan. There are sharp, pointy edges to the structure; it’s appropriate because some of McDonagh’s sharp, stinging dialogue carries the effect of stabbing and poking you when you least expect it.

The set easily transforms, for instance, from the Osbourne sisters (Billy’s aunts) grocery shop to an outdoor docking area to Mammy O’Dougal’s bedroom. With the exception of a few other locales, the action is largely set in the grocery shop, its contents arranged neatly.

The shop, you could say, is the central meeting place on this island where there’s nothing to do. It is cramped, reinforcing the notion that these characters are trapped.

Eileen Osbourne is the calmer, more controlling and less sentimental woman. As played by Elizabeth Dimon, Osbourne comes across as a stern, severe, commanding, patient but no-nonsense nun. She’s in marked contrast to Laura Turnbull’s restless, worrying Kate Osborne, who talks to stones.

The pair speak lines that will make you laugh one moment, gasp in horror the next and then want to comfort them in their worrying about their poor “Cripple Billy.” Before you know it, at the sight of their nephew, relief is washing over them like waves of the nearby body of water, brought to vivid life through ocean-like sounds by sound designer Steve Shapiro.

Some of the Osbourne siblings’ dialogue will call to mind Chekhovian despair while during other moments, you feel as though you’re watching a female comic duo.

Slapstick worthy of the Marx Brothers comes courtesy of the character of Helen, an island inhabitant with the toughness of a football player. Adelind Horan avoids the trap of turning Helen into a complete witch. Horan, whose Helen carries an air of frustration ready to be released, finds shades of humor and vulnerability in her character – making her someone with whom we can sympathize. She takes out most of her aggression on her brother, Bartley (a fun-loving, mischievous and wry Wesley Slade).

A more complex character is Babbybobby Bennett, played by Jim Ballard as a blue collar, primitive man not unlike A Streetcar Named Desire’s Stanley Kowalski or Carousel’s Billy Bigelow. There’s a menacing aura surrounding Ballard’s Bennett, but also a tender spot. He seems a sympathetic character, despite his gruff exterior, because of his soft spot for Billy.

This play is anything but predictable, and that’s part of what makes it so entertaining. There are twists and turns as though you’re on a rollercoaster making sudden, thrilling maneuvers. But there’s also a hopelessness in the air — a feeling all too familiar for today’s folks living in a time of war, political upheaval and an uncertain, many may say scary future.

Some may feel we’re living in a Chekhovian universe, waiting for our own “Godot” to come to our rescue.

This lighthearted ‘Legend’ will whisk you away from your worries