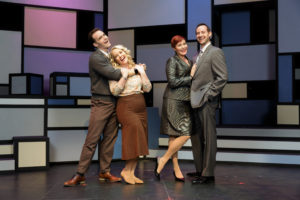 The result is an up-to-date, edgier, at one point, naughtier, I Love You, You’re Perfect, Now Change. Therefore, adults should definitely use discretion when it comes to taking the kids.

With that out of the way, it’s a pleasure to say an invigorating, energetic, at times touching production of the aforementioned runs through Aug. 12 in South Florida. West Palm Beach-based MNM Theatre Company has mounted it.

With the exception of the song “A Picture of His…”, which replaces “He Called Me,” the musical remains a mostly clean, amusing and crowd-pleasing piece. It will still likely leave you chuckling and knowingly nodding your head.

Surely, the dating scene and relationships have changed since DiPietro and composer Jimmy Roberts created this show. It premiered Off-Broadway in 1996. The show received a nomination for the Outer Critics Circle Award as Outstanding Off-Broadway musical in 1997.

I Love You, even with the changes, remains an amusing, loosely-connected series of vignettes tied together by topics such as love and relationships. The sketches, with songs deepening emotion and getting us inside the characters’ heads, suggest the unfolding of relationships throughout a lifetime. We witness a first date, marriage, sex, raising children and eventually, dealing with old age. Perhaps that sense of order appeals to many, especially in today’s chaotic world.

Then again, falling in love and everything that precedes and follows it can be anything but orderly. Just listen to Lysander in A Midsummer Night’s Dream: “The Course of True Love Never Did Run Smooth.”

Indeed, the maze- or puzzle-like arrangement of video screens in this production, which serves as the set, might suggest the road to love and marriage is meandering and winding. It’s not nearly as straightforward as some may think.

The placement of these screens on the stage is symbolic in that way.

Scenic designer Cindi Taylor has arranged the box-like video screens so there are crevices between some, but no gaps between others. Similarly, in the chaotic world of dating, matrimony and mating, some “doors” open, leaving an opportunity for a relationship to blossom. But other “doors,” even if they’ve remained open for many years, can shut unexpectedly, leaving one without a spouse or even a date.

Curiously, for the most part, the images that appear on these screens are little more than odd shapes that seem to have nothing to do with this show. Projection design in theater can enhance storytelling, but not if we don’t know what the designer is trying to convey.

The musicians play keyboards, woodwinds, bass and drums/percussion. They’re seated behind the screens, playing everything from tango to the soft, sweet tones of music fit for an infant. In addition, these talented musicians make stately music, sounding like an organ during a wedding and play louder, in-your-face, rock-style songs when appropriate.

Music director Caryl Fantel knows when to emphasize notes and when to tone it down. Similarly, lighting designer Thomas M. Shorrock creates just the right moods with appropriately chosen colors and intensity.

Clay Cartland, Anna Lise Jensen, Heather Kopp and Michael Scott Ross are strong as an ensemble and as individual performers.

They portray multiple roles and perform many vignettes.

Generally, the strongest vignettes feature characters who’ve learned something and have changed at the end.

For instance, consider “Funerals Are for Dating.” A man enters a service and rudely begins talking to an attendee. At the beginning, she wants to get away from him quickly. It’s as though he were a mosquito. But as the vignette progresses, the two learn they have at least one thing in common: They’re aging, facing common ailments and become aware of their mortality. Soon, they choose to look on the positive side, making the most of the time they have left. By the end, they’ve grown fond of each other.

To the playwright’s credit, there’s plenty of humor here, so we’re never depressed. On the contrary, we’re laughing one moment, and dabbing at tears the next.

Most likely, people laughed and identified with these folks when I Love You opened in the 90s.

They still do today, judging from the reviewed performance.

The landscape in 2018 just looks a whole lot different.