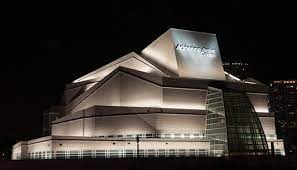 A fresh adaptation of Frankenstein, a Stephen Sondheim classic, and a new twist on a Charles Dickens classic are among the shows comprising the 10th annual Theater Up Close series in Miami. The series, a collaboration between the Adrienne Arsht Center for the Performing Arts of Miami-Dade County, City Theatre, and Zoetic Stage, also features a world premiere and two South Florida premieres. All shows will take place at the Arsht.

“Our focus continues to be on keeping our guests, artists, and staff safe,” reads a prepared Arsht Center statement. “We have implemented a series of new measures for everyone’s safety and peace of mind.”

For instance, audience members will need to maintain their distance, wear a face covering, and participate in a brief health screening. For more details about the Arsht’s new safety measures, visit https://www.arshtcenter.org/Visit/Returning-to-the-Arsht-Center.

The season will open on Oct. 14 with the South Florida premiere of Nick Dear’s stage adaptation of Frankenstein. The production will run through Oct. 31.

Following Frankenstein, Jacob Marley’s Christmas Carol by Tom Mula will take the stage. It will run from Dec. 2-19.

Then, to open 2022, Zoetic Stage and the Arsht Center will present the world premiere production of Gringolandia, A Cuban Journey by Miami-area playwright Hannah Benitez. It will run from Jan. 13-30. This play was originally part of the 2019-2020 season. However, COVID-19 caused its postponement.

A Little Night Music follows. The classic, with music and lyrics by Stephen Sondheim and a book by Hugh Wheeler, will run from March 17-April 10. The plan was to present the musical during the 2019-20 Theater Up Close season, but COVID-19 caused its postponement.

The South Florida premiere of Our Dear Dead Drug Lord will run from May 5-22 to close out Theater Up Close’s 10th anniversary season.

“Now more than ever, it is imperative to showcase some of the incredible theater South Florida has to offer with the tenth anniversary of our award-winning Theater Up Close series,” said Liz Wallace, the Arsht Center’s vice president. “We are proud to have preserved most of the originally-scheduled Theater Up Close season shows. And we are so grateful to our artistic partners at Zoetic Stage and City Theatre for being able to safely bring back the irreplaceable experience of live theater for audiences to relish once again.”

Five-show subscription packages are available starting at the early bird rate of $169 until June 11. Packages after June 11 start at $194. You can purchase subscriptions through the Adrienne Arsht Center’s box office by calling (305) 949-6722, or online at arshtcenter.org. Patrons will be able to purchase tickets for individual performances at a later date.

The following is a more in-depth look at the shows comprising Theater Up Close’s 10th season.