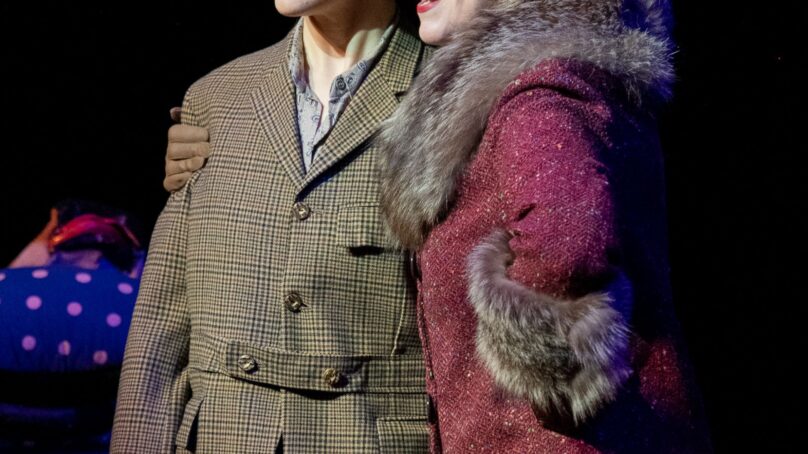 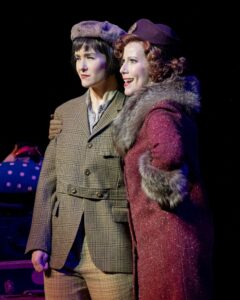 Mama Rose, from Gypsy, is an abusive parent.

True, she might not get physical with her daughters. However, chances are that the words this mother of all stage mothers hurl at her offspring sting emotionally.

How else can you explain daughter Louise running to her talent manager, Herbie, for protection from the onslaught Mama Rose unleashes during the act one finale, “Everything’s Coming Up Roses?” Sure, the number contains esteem-boosting, uplifting lyrics. Even so, to Louise, each word must feel like a punch or kick to the gut.

For a moment, look past the glamour, sparkling lights, upbeat songs, stuffed animals, and cute children. Instead, consider the aforementioned scene. Or, turn your attention to Rose at the end of the show. She is sobbing while tightly hugging Louise after forcefully revealing what she had been bottling up inside her for so long: She did it for herself. She tried to experience fame and recognition vicariously through her children. After all, up until now, nobody noticed her. In fact, her own mother neglected her and may have emotionally abused her. Will Rose ever receive the attention she desires?

Indeed, Gypsy is a dark show. In fact, some of the bright, upbeat songs seem out of place.

Such thoughts crossed my mind during a performance of The Wick Theatre’s sunny, winning, riveting, and yes, dark production of Gypsy. It runs through Feb. 13 at the nonprofit, professional theater company in Boca Raton.

Without question, the Wick’s production is believable, upbeat, and energetic. For instance, it features vivacious dancing and stirring renditions of show-stopping numbers. They include the aforementioned “Everything’s Coming Up Roses” and “Mr. Goldstone, I Love You.” Meanwhile, child actor Addie Jaymes is adorable as Baby June; she might remind you of Shirley Temple. Addie alternates in the role with Alejandra Bess.

This talented cast, under director Norb Joerder’s assured guidance, also deftly captures the show’s darkness. For example, it sure sounds like Laura Hodos, as Rose, is actually sobbing after the character admits in the forceful 11 O’Clock number, “Rose’s Turn,” that in the end, she did it all for herself. Also, Melissa Whitworth, as Louise, looks genuinely concerned, if not scared, in Herbie’s grasp. She is trying to shield herself as Rose, with frightening conviction and ambition, sings “Everything’s Coming Up Roses.”

Of course, the success of any production of Gypsy rests largely on the performer in the leading role of Mama Rose. She is one of musical theater’s great flawed characters. So, I am happy to report that the Wick has a gem in Hodos. Indeed, she has won many top awards. In addition, she is a seven-time Carbonell nominee. The Carbonells are South Florida theater’s version of the Tony Awards. Without a doubt, Hodos deserves a Carbonell for her work as Rose.

The performer brings necessary ingredients to the role. In particular, they include a strong, expressive voice, and a commanding, fearless presence. Also, Hodos demonstrates an impressive spontaneity. With wide, blazing brown eyes, the reddish-brown-haired Hodos never lets you forget that her Rose is in command.

Many actresses, from Ethel Merman to Angela Lansbury, as well as Tyne Daly, Patti LuPone, and Bernadette Peters, have played the iconic role of Rose. Each has put their own stamp on this much-coveted, challenging, complex role. You might say Rose is musical theater’s King Lear or Hamlet.

LuPone’s Rose was a formidable bulldozer, obliterating anything in her way. Meanwhile, Peters presented a more sensuous Rose.

To be sure, Hodos makes the character her own. However, I would say her Rose comes closest to that of LuPone.

But while Hodos excels at capturing a fearless, commanding, and confident, even frightening Rose, the performer explores the character’s other layers. Namely, she conveys the character’s charm, elegance, and seductive quality during numbers such as “You’ll Never Get Away From Me” and “Small World.” Hodos also manages to be upbeat and reassuring in “Together, Wherever We Go,” and adamant in “Some People.”

Hodos is hardly alone in excelling in the Wick’s production. In particular, Matthew W. Korinko triumphs as Herbie, Rose’s boyfriend and her children’s talent agent.

Korinko nails Herbie’s devotion to Rose and her offspring. Also, his Herbie credibly conveys a seemingly endless amount of patience. However, Korinko’s Herbie lets you know when he is nearing the end of his patience. He wishes to finally marry Rose, who had been married several times before. However, Rose is more focused on her daughters’ act than marrying Herbie.

Speaking of Rose’s daughters, Melissa Whitworth shines as the adult Louise. A performer playing her must be convincing as an awkward teenager and eventually as the sensuous, sophisticated stripper we now know as Gypsy Rose Lee. Whitworth is believable as both, and transitions seamlessly from awkward teen to Lee, whose memoirs serve as the basis for Gypsy.

Willie C. Beaton II proves to be nimble and a strong dancer as Tulsa. Also, he conveys charm and charisma, especially during the character’s solo, “All I Need Is the Girl.” Tulsa is a young man trying to break out of Mama Rose’s troupe and establish an act of his own.

Wayne LeGette imbues Mr. Goldstein with wide-eyed surprise after Rose lavishes him with eggrolls and more.

A fine supporting cast of performers energetically and believably inhabit their roles. They sing with expression. Recorded music ably backs them.

Gypsy’s songs feature melodies which Jule Styne composed. The glorious score’s numbers are so memorable and hummable, you will find it hard to get them out of your head. Also, there is variety in the score.

None other than the legendary Stephen Sondheim, who died in November, wrote the eloquent lyrics.

Gypsy, often titled Gypsy: A Musical Fable, was Sondheim’s second Broadway production in 1959. He never shied away from dark, challenging material. It is the kind you might least expect someone to use for a musical. For Gypsy, Sondheim worked with Styne and librettist Arthur Laurents, who penned a taut, character-based script. The show takes place starting in the early 1920’s. Basically, it is about Rose trying to find work for her daughters during the waning days of vaudeville, when burlesque was becoming more popular.

Many consider Gypsy to be the crowning achievement of 20th Century musical theater. It is easy to see why. For instance, the characters’ desires provide the show with a strong dramatic drive, keeping us riveted to the stage throughout.

Certainly, audiences will find it hard to look away from the stage while attending the Wick Theatre’s captivating Gypsy. 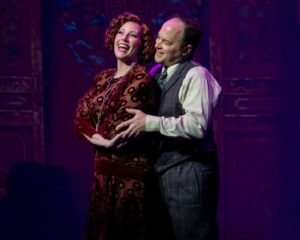