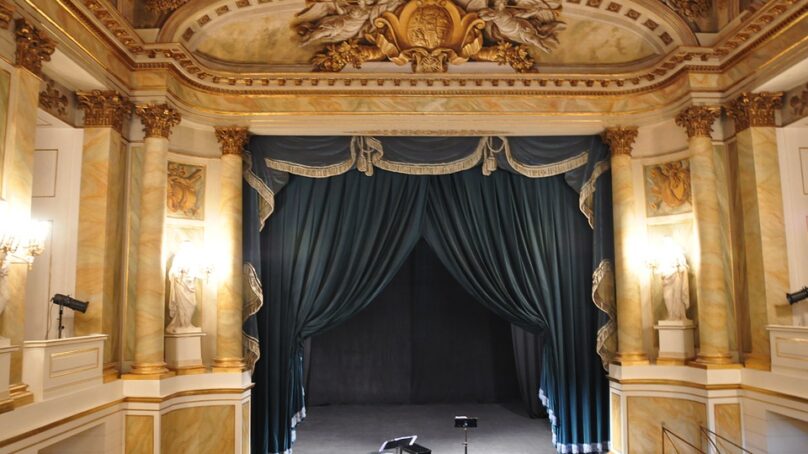 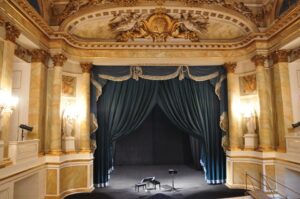 After producing a couple of timely, thought-provoking plays, Island City Stage (ICS) will wrap up its 9th season with a much lighter piece.

Specifically, the Wilton Manors professional, nonprofit company will sport Bright Colors and Bold Patterns from June 4-29. ICS has added mask optional in-theater dates of June 9, 17, 24, 26, and 27. These performances are different in protocols and are clearly identified as “Mask Optional” on ICS’s website.  Meanwhile, the production will be available to stream from June 23-29.

In Bright Colors and Bold Patterns, it’s a calm, lovely Saturday afternoon by the pool at a Palm Springs home the day before Josh and Brennan’s wedding.  Suddenly, in walks their friend, Gerry. He is either the ideal wedding guest or your worst nightmare, depending on your point of view. Gerry’s drunken, drug-fueled tirade is at the center of this piece, a hit Off-Broadway comedy by Drew Droege. But what is his beef? He’s furious that the wedding invitation reads, “Please refrain from wearing bright colors or bold patterns.”

“I chose this show because it’s just plain funny,” ICS Artistic Director Andy Rogow said. “This play has no deep message or lesson. It allows us to laugh for laughter’s sake.”

Performances will take place at 8 p.m. EST on Fridays and Saturdays, as well as 5 p.m. on Sundays.

For the comfort and safety of patrons, COVID protocols will remain in place. For instance, the company is seating  at only half-capacity. Also, ICS will require patrons to wear masks on performance dates not identified as “Mask Optional.”

Rogow said that he feels ICS’ 9th season was successful.

“Even during this very challenging year, we were able to do some of the best work we ever have, both in-person in the theater and through streaming,” he said. “We continued to produce plays, including two world premieres, that were provocative and entertaining, and we were able to do it safely.”

Looking ahead, ICS has announced the line up for its 10th anniversary season. For details, visit https://theatricalmusings.com/island-city-stage-2/island-city-stage-announces-its-10th-anniversary-season. And to order tickets to Bright Colors and Bold Patterns, visit islandcitystage.org or call (954) 928-9800. The theater is located at 2304 N. Dixie Highway in Wilton Manors.

Palm Beach Dramaworks (PBD) will launch a new online series, “Luminaries of Stage & Screen,” featuring major artists in conversation. The series will kick off at 10 a.m. ET on Wednesday, May 19 with the legendary Louis Gossett Jr. The esteemed actress Lynne Moody will follow at 10 a.m. ET on Wednesday, May 26.  For more information and tickets, visit www.palmbeachdramaworks.org or call the box office at (561) 514-4042, extension 2. Producing Artistic Director Bill Hayes will host both conversations.

In other PBD news, the professional, nonprofit company has announced the title of the second of its two world premieres for the 2021-2022 season. The world premiere production of The Duration by Bruce Graham will open on Feb. 4. Closing dates for all of PBD’s productions are not final.

In The Duration, a young woman makes a weekly trek to a cabin in the middle of nowhere. She is trying to unravel the mystery of why her mother, a noted historian and professor, abruptly disappeared.

Also, to close out the season, PBD will offer a live, in-person encore presentation of William Luce’s The Belle of Amherst, opening on May 27. PBD, along with Actors’ Playhouse in Coral Gables, recently produced a streaming version of the one-woman show, starring actress Margery Lowe. And she will return to the role of Emily Dickinson for the encore production.

“The feedback on The Belle of Amherst was so extraordinary that we wanted it to have a new life in front of an audience,” PBD Producing Artistic Director Bill Hayes said. “That was the only thing missing from our online version. And we’re delighted to have the opportunity to produce the world premiere of The Duration, which created a lot of excitement when we presented (a reading of the play).”

Theatre Lab, Florida Atlantic University’s professional resident company, is accepting applications for the 2021 Fair Play Initiative. It’s a commission and development program for LGBTQ+ playwrights.  With support from Our Fund Foundation, The Fair Play Initiative will provide commissions for two new audio plays by LGBTQ+ playwrights along with a week-long development process this summer. The initiative will culminate in a publicly-presented staged reading.

Theatre Lab invites interested playwrights who identify as LGBTQ+ to submit proposals for a commissioned 45-55-minute audio play. Theatre Lab must receive the submissions by 11:59 p.m. ET on May 16. Specifically, interested playwrights should email a bio (150 words or less), a brief summary of their proposed play (200 words or less) and three pages of sample work to theatrelab@fau.edu. Use “2021 FPI Audio APP for the subject line.

Selected playwrights will receive an initial stipend of $1,000 to begin work with an additional $1,000 payable upon completion of the public reading during June. Then, Theatre Lab will schedule the plays for a week-long development process. The plays will receive no less than 18 hours of rehearsal and development before a reading for an audience. The playwright will be present, either virtually or in-person, for the entire rehearsal process and the reading. Also, the playwright will take part in a post-show discussion with the audience about the play and the process. Following these development sessions, Theatre Lab will fully produce and present at least one of the plays as a “Theatre Lab Digital Production” by October of 2021.

Despite the pandemic, the Silver Palm Awards show will go on at 6:30 p.m. on Monday, Oct. 25. The popular program recognizes excellence in South Florida theater. The artists do not compete against each other.

The 2021 free celebration will take place on Oct. 25 as a “celebration of the reopening of South Florida Theater,” complete with cocktails, dinner, and dancing.

The sponsor for the evening will be The Tony Finstrom Trust, named after the late co-founder of The Silver Palm Awards. The location will be The Addison, 2 East Camino Real in Boca Raton.

Breathe: A New Musical is streaming on-demand. The show features five interlocking suites, each with a different songwriting team and director. Each suite received its title after a symptom of COVID-19. The show chronicles the day-to-day realities of living during the pandemic, from parenting in quarantine to generational divides on Black Lives Matter to practicing grief rituals via Zoom. For $25 tickets, visit https://overture.plus/patron/actors-playhouse-at-the-miracle-theatre. After purchasing, you’ll receive your unique link to view. The all-star cast includes Tony Award-winners Kelli O’Hara and Brian Stokes Mitchell, among others.

Actors’ Playhouse at the Miracle Theatre has announced its 2021-2022 mainstage season, as well as one remaining show this summer to close out this season. Below is a description of each show, in addition to dates. For additional information, call (305) 444-9293 or go to www.actorsplayhouse.org.