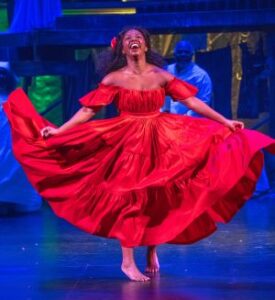 Slow Burn Theatre Company’s stirring production of the rousing, Caribbean-flavored folktale of a musical, Once On This Island, is simply stellar.

From dynamic, in-sync dancing to believable, charming performances and eye-popping costumes, this production amounts to an all-around winning effort. Performances run through Feb. 20 in Broward Center for the Performing Arts’ Amaturo Theater.

Once On This Island, a calypso-flavored re-telling of The Little Mermaid, is a celebration of the power of positivity, storytelling, and hope. The musical’s basis is the novel My Love, My Love, by Rosa Guy.

There is division on the Caribbean island on which this musical takes place. Specifically, the wealthy, descendants of rich French planters, live on one part of the island. Meanwhile, peasants occupy another part. However, a young peasant woman named Ti Moune proves to be a uniter. She is one of musical theater’s more likable characters, right up there with Little Orphan Annie.

In fact, Ti Moune is also an orphan. The Gods who preside over the island spare her life from a storm, and two caring, protective people adopt Ti Moune. She goes on to rescue and nurse back to health Daniel, a wealthy young man from the other part of the island. But will Ti Moune’s radiant personality and affection be enough to make Daniel love her back?

Once On This Island garnered eight Tony nominations for its original Broadway run in 1990, including for “Best Musical.” This 90-minute, one-act show is a focused, uplifting, and compelling tale of one person making a difference through her determination and capacity to love. The musical, which ends bittersweetly but not predictably, leaves us with the hopeful message that the power of love is stronger than the fear of death.

The musical’s creators make up the the multi award-winning, versatile team of Lynn Ahrens (book and lyrics) and Stephen Flaherty. They are the same team behind such musicals as Ragtime and Seussical.

Once On This Island’s songs are not nearly as memorable as those in Ragtime. However, the former’s musical numbers, some energetic, some slower and softer, enhance the moods of scenes. In addition, the music, along with Ahrens simple, heartfelt lyrics, deepen the characters’ emotions. In addition to penning the lyrics, Ahrens also wrote the show’s compelling book.

Lighting designer George Jackson’s work features an array of colors. Among other things, they reinforce the piece’s non-realism, as does frequent stage fog. Also, the lighting helps focus the performers.

When it comes to portraying these characters, this cast shines.

As Ti Moune, Brinie Wallace’s sunny enthusiasm and radiant smile make the young peasant woman an instantly likable character. Also, Wallace imbues Ti Moune with such hope, optimism and determination that the character of Annie comes to mind. In addition, Wallace turns in an impressively sensitive performance. Namely, the performer makes the emotional pain that Ti Moune experiences particularly vivid. You practically want to ascend the stage to comfort her during rough moments.

As Daniel, Jemarcus Riggins imbues the young man with a playful and charming demeanor. Based on this portrayal, it is easy to see why Ti Moune would fall for him – and feel so hurt when he rejects her. Daniel is not an inherently arrogant person. Rather, he was raised wealthy, and can come across as stuck up. Riggins invests Daniel with just enough pride without making the character unlikable.

Elijah Word makes the villainous Papa Ge, an evil God, as sly and sneaky as a snake, complete with an evil laugh and a commanding presence.

Fittingly, a fireplace rests centerstage. It is fitting because this Slowburn production radiates with warmth, vitality, and honest emotion.

Slow Burn Theatre Company’s production of Once On This Island runs through Feb. 20 in the Amaturo Theater, located within the Broward Center for the Performing Arts. The address is 201 SW 5th Ave. in Fort Lauderdale. There are seven remaining performances. Show times are 1 p.m. and 6:30 p.m. Sunday; 7:30 p.m. Thursday-Saturday, as well as 1 p.m. Saturday, Feb. 19, and Sunday, Feb. 20. Tickets range from $49-$65. To purchase tickets, go to https://www.browardcenter.org/events/detail/slow-burn-theatre-co-once-on-this-island. For questions, call (954) 462-0222. 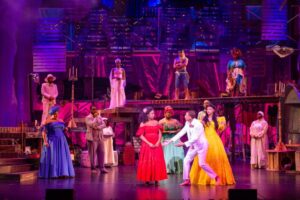 Here is the company of Slow Burn Theatre’s production of Once On This Island appearing in a scene.

‘Frozen’ the musical leaves you feeling warm inside