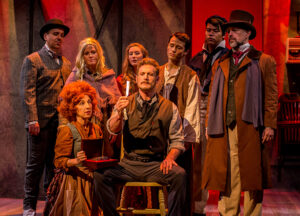 South Florida’s “theater prom” on Monday night might have lacked the glitz and glamour of previous years. Still, the 44th Carbonell Awards carried an aura of optimism, hope, and celebration.

Indeed, presenters, performers, and award winners celebrated not just excellence in South Florida Theater during abbreviated calendar year 2019 (due to the pandemic), but the diversity of the South Florida theater community, and theater itself.

Monday night marked the first time that the Carbonell Awards, which many fondly call South Florida’s “theater prom,” took place virtually. Although the coronavirus pandemic prevented everyone from gathering and celebrating in person this year, the show went on. And it was, indeed, a show, with plenty of musical performances.

In fact, the event began in song, and with members of the diverse local theater community answering the question “Why does theater matter to you now?” Responses ranged. They included “creating art inspires,” “theater changes lives,” “theater unites us,” “stories hold power,” and “miss the magic.”

This recognition of theater’s importance seemed to set the tone for the evening. Presenters and others spoke passionately about live theater and the honorees for the evening. The Carbonells organization presented awards in 20 competitive categories, featuring 100 different nominations. Out of more than 80 shows that opened in 2019 at regional theaters, 62 were eligible for nominations.

Speaking of the award winners, Miami-based Zoetic Stage led the way with 12 awards. They included Best Production of a Musical honors for the company’s staging of Stephen Sondheim’s Sweeney Todd: The Demon Barber of Fleet Street. In fact, Zoetic’s Sweeney earned eight awards. That tied the production with one of Joseph and the Amazing Technicolor Dreamcoat at Coral Gables-based Actors’ Playhouse as the most awarded show in Carbonell history. The production of Joseph took place during the 1999-2000 season.

Zoetic Stage also took home Best Production of a Play honors. The award recognized the company’s mounting of The Curious Incident of the Dog in the Night-Time.

While Zoetic captured both best play and musical honors, one of its artists was also a double winner. Zoetic’s artistic director, Stuart Meltzer, swept the directing awards. Specifically, he took home Carbonells for Best Director of a Musical for his work on Sweeney Todd and Best Director of a Play for The Curious Incident of the Dog in the Night-time.

Yet another double winner was Jeni Hacker. She won Best Actress in a Musical for her portrayal of the meat pie-baking and conspiratorial Mrs. Lovett in Zoetic’s Sweeney Todd. In addition, Hacker captured Best Actress in a Play honors for her work as a Mormon mother trying to understand her gay son. Hacker played the mom in Grindr Mom, a Ronnie Larsen Presents production. By the way, Grindr Mom received the Carbonell for Best New Work, Play or Musical.

Larsen’s Grindr Mom wasn’t the only play featured that includes diverse characters. In addition, Lorraine Hansberry’s A Raisin in the Sun focuses on an African American family in Chicago during the 1950’s. During the past theater season, Ft. Lauderdale-based New City Players gave it a superb production. One of its highlights was Rita Cole’s performance as Ruth Younger. The portrayal earned Cole a Carbonell for Best Supporting Actress. And what had to be extra special for Cole was that she won the award on her birthday.

Diversity was a theme not just in works highlighted during the evening, but for the ceremony itself. For instance, Darius J. Manuel, executive artistic director of the newly established Renegade Theatre Company in Lauderhill, spoke about his company’s mission.

Also, William Fernandez, a producer of the immersive Amparo The Experience, stressed the need for diversity as he accepted the special Ruth Foreman Award for the production.

“I wish to make a plea to South Florida theater owners and operators…to include people of color in leadership positions,” he said. It’s very, very important that these voices be heard.”

“Playing Rose gave me the opportunity to explore the dynamics of the black household that is responding to societal oppression, and having been born a black woman in this country, I felt like I had some experience to bring to that role.”

Dave Lawrence, president and CEO of the Cultural Council for Palm Beach County, presented Dramaworks with the award.

“We’re grateful for the stories you tell,” Lawrence told company Producing Artistic Director Bill Hayes and Managing Director Sue Ellen Beryl. Lawrence added that the theater company is a “cultural force for the Palm Beaches” and that it takes audiences on “extraordinary journeys.” The company does this while also “creating achingly beautiful moments of wonder and discovery,” Lawrence said.

The Wall Street Journal has called Dramaworks one of the top ten regional theaters in the country.

“We’re delightful that this award brings additional attention to our initiatives,” Beryl said.

And Hayes said, “We do believe that theater is a collaborative art form.”

In total, the Carbonells recognized Palm Beach Dramaworks with three awards. That is second to Zoetic Stage’s unprecedented 12.

Specifically, Amy Miller Brennan won her second Carbonell for her work in Dramaworks’ production of The Spitfire Grill. Brennan took home Best Supporting Actress in a Musical honors. Also at Dramaworks, Anne Mundell won Best Scenic Design in a Play or Musical for A Streetcar Named Desire. That classic Tennessee Williams’ play was a nominee for Best Production of a Play. Meanwhile, Kathy McCafferty, who played Blanche DuBois in that production, was among the nominees for Best Actress in a Play. She said she enjoyed participating in the production.

“It was, to borrow from Williams, a little piece of eternity dropped in our hands,” she said.

Palm Beach Dramaworks’ tagline is “Theatre to Think About.” And the company’s Carbonell-nominated production of The House of Blue Leaves illustrated that, Elena Maria Garcia suggested. She was one of the nominees for Best Actress for her role in the aforementioned John Guare play. What’s beautiful about the piece Garcia said, is that audience members would spill out into the lobby following a performance and immediately begin talking about the play.

“That’s what theater is all about,” Garcia said. She added The House of Blue Leaves made audiences think, making it the perfect play for Dramaworks.

The Carbonell Awards organization dedicated at least part of the evening to the late, long-time GableStage Producing Artistic Director Joe Adler. He died in April after a long battle with cancer.

Carol Fantel, of Fantel Music, which produced Monday night’s show, noted that Adler always believed theater should provoke conversation – regardless of how tough the subject matter.

Adler collaborated with Hayes this past season for a world premiere co-production of Ordinary Americans. It is based on a true story. The play centers on a pair of pioneering stars of television’s groundbreaking sitcom, The Goldbergs.  The play chronicles the pairs struggle to save their show, their careers, and their friendship in the face of McCarthyism, anti-Semitism, and the political climate of the country. For his role as Philip Loeb, one of the stars, David Kwiat earned a Best Supporting Actor in a Play Carbonell. Kwiat is now a four-time Carbonell winner.

Another much-lauded performer honored at the ceremony was Barbara Bradshaw. She is a founding member of the now-defunct Caldwell Theater Company. Bradshaw received the Bill Hindman Award. Its namesake (1922-1999), was a pioneer South Florida actor. The award’s recipients receive recognition for significant, long-term contributions to the region’s cultural life and onstage career achievement. During the ceremony, local director and educator Hugh Murphy heaped her with praise. Bradshaw is versatile and a “force to be reckoned with and a talent that almost defies description.”

“I owe so much to so many,” said Bradshaw, whose career spanned 45 years.

Bradshaw, who attended the ceremony, said she feels the event amounted to a moment in time that encapsulated both the “best and worst of times.” On the one hand, it’s the best of times when people can celebrate outstanding work. But it’s also the worst of times. In particular, the South Florida theater community couldn’t come together to celebrate during a time when theater artists and audiences are mourning the temporary loss of their art.

“But we will survive; we’re actors!,” Bradshaw said.

“No matter what the world throws at us, we always come back stronger than before,” she said.

Along with New York’s Drama Desk and Chicago’s Joseph Jefferson Awards, the Carbonells are among the nation’s senior regional arts awards. They predate others, including Washington, D.C.’s Helen Hayes Awards.

The Carbonell Awards foster the artistic growth of professional theater in South Florida by celebrating the diversity of  theater artists, providing educational scholarships, and building audience appreciation and civic pride by highlighting achievements of South Florida’s theater community. The awards’ namesake is Manuel Carbonell. He was an internationally-renowned sculptor who designed the original solid bronze and marble award in 1976. Each season, volunteer panelists and judges choose nominees and recipients from hundreds of shows produced on stages throughout the tri-county area.

For a complete list of nominees and award winners (highlighted in bold), visit https://theatricalmusings.com/reviews-by-theater/heres-a-full-list-of-this-years-carbonell-nominees-and-winners. 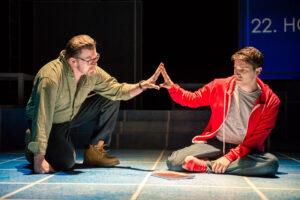 (From left) Steven G. Anthony and Ryan Didato appear in Zoetic Stage’s The Curious Incident of the Dog in the Nightime.