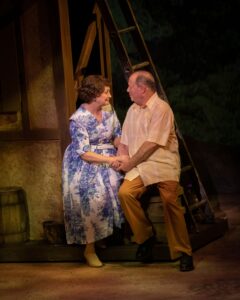 It is unfortunate that Milk and Honey, the show for which Jerry Herman penned his first Broadway score, never received a revival on the Great White Way.

Certainly, the musical is compelling. Indeed, the 1961 Tony Award-nominated show has a hopeful, humorous, and witty book by Don Appell. And Herman’s varied and moving score provides an early example of his talents. It includes heartfelt and humorous lyrics, as well as catchy and lush melodies.

Still, the musical has not aged well. And perhaps that is why theater companies mount productions of Milk and Honey so infrequently.

In particular, the fact that a main character courts another woman while he is married may not sit well with modern audiences. And at least one of the show’s lines about marriage and women seem outdated in 2022.

But judging from the enthusiastic audience reaction during and after the reviewed performance of a current production, the show’s positive qualities outweigh the outdated material.

The Wick Theatre, a professional, regional theater company in Boca Raton, Fla., is giving Milk and Honey an energetic and believable production. It runs through Nov. 6.

Milk and Honey takes place in Israel during the early 1960’s. That is roughly a dozen years after the nation became an independent country in 1948.

The tale centers on a love affair. It is between Phil, an American visiting his daughter in Israel, and a widowed American woman, Ruth. She is travelling with a group of American widows touring the land of Israel.

Ruth and Phil, who are both Jewish, keep running into each other. And, together, they celebrate Israel’s Independence Day. As time passes, their friendship deepens. But Phil’s conscience troubles him. While he and his wife have been separated for many years, he does not think it right to continue seeing Ruth. After all, he is still technically married.

But true love has a way of bringing two people together, despite reasons that may suggest that they should remain apart.

A subplot involves the courtship between Clara, one of the widows, and Sol, a widower from Jerusalem. Francis Allen plays Sol with polish and politeness.

In Milk and Honey, although several years have passed since Israel gained its independence, the country is still in a state of transition. From the show’s beginning, book writer Appell makes us realize that, despite the country’s independence, tension remains and people are on edge. Specifically, at the start of the show, the calmness of a morning street scene in Jerusalem suddenly gives way to chaos. The trouble starts when a policeman orders a Yemenite boy to remove his flock of sheep to a side street.

Just as Israel is in a state of transition during the time in which the show is set, so, too, is Phil. While he is married, it has been years since he last saw his wife. In fact, the two have grown so far apart that they are husband and wife in name only. In a way, Phil is seeking his own independence.

While Phil and Ruth may harbor misgivings about staying together, they obviously love each other.

“He touches me, and reason runs away,” Ruth says, describing the effect Phil has on her.

The couple express their feelings for each other through tender, touching ballads. The songs include “There’s No Reason in The World” and “Let’s Not Waste a Moment.”

Meanwhile, Clara is trying to move on years after the death of her beloved husband, Hymie. However, she feels she cannot move on until she “receives” Hyman’s blessing and permission. And, so, Clara sings to her late husband in the heartfelt number “Hymn to Hymie.”

If “Hymn to Hymie” sounds familiar, it is likely because you heard Dolly Gallagher Levi seek permission to start over from her own beloved, late husband, in Hello, Dolly. That musical classic, which also features music and lyrics by Herman, debuted on Broadway in 1964. That is three years after Milk and Honey.

The year 1964 also saw another show featuring Jewish characters make its Broadway debut. You may have heard of it – Fiddler on the Roof. Herman did not work on Fiddler.

That multi award-winning musical classic, which has received several Broadway revivals over the years, shares a couple of commonalities with Milk and Honey. In addition to the fact that both shows feature Jewish characters, we also, for some unexplained reason, see a character on a roof in The Wick’s production of Milk and Honey. Also, in Fiddler, we hear an elderly lady, Yente the Matchmaker, speak at least respectfully about her late husband, Aaron. In addition, both shows feature women looking for husbands.

But at least the show currently playing at The Wick Theatre gives audiences a chance to experience a lesser-known work by Herman. Milk and Honey showcases Herman’s talents at an earlier stage in his career. Also, it is a show that introduced many of us to the late, great artist.

Throughout his career, Herman has succeeded in penning lyrics and composing music that vividly expresses optimism. But Herman has also triumphed with darker material.

And while Milk and Honey expresses hope and optimism, Herman wrote dark lyrics for the show. He reminds us that, even after its independence, Israel was not a land flowing only with milk and honey.

Herman and book writer Appell steer clear of politics and the Israel-Palestine conflict. Instead, they tell a human story about the effect true love can have on people. We root for the characters to be together because they are likable people with good intentions. And, at the end of the show, the characters remain hopeful – just as Israel does, even after decades of bloodshed and conflict.

Avi Hoffman, who has performed and received accolades all over the world, portrays Phil with an affability and respectfulness that endear the character to us. Also, we keenly sense Phil’s inner conflict as he is torn between remaining with Ruth and going his separate way. Hoffman, who also nails Phil’s charisma, demonstrates a naturalness and spontaneity onstage that is hard to teach, whether he is singing or talking. In addition, Hoffman and Laura Turnbull, who portrays Ruth, display great chemistry together.

Speaking of Turnbull, she imbues Ruth with credible modesty and sensitivity. Also, we keenly sense the love she has for Hoffman. In addition, the inner conflict that Ruth experiences comes across vividly through Turnbull’s impressively natural performance.

Hoffman and Turnbull are mostly understated as they play characters who are not particularly loud or vocal.

In sharp contrast, Irene Adjan often commands the stage as the opinionated, nosy, blunt, and talkative Clara. Impressively, the performer manages to be loud as the sometimes-wisecracking Clara, without making her unlikable. Adjan is commanding without overshadowing her fellow performers and the actress is always natural.

Also, when it comes time for Clara to act vulnerable, particularly during the number, “Hymn to Hymie,” Adjan proves up to the task. Specifically, she sings lovingly and modestly to her dearly departed hubby.

As Phil’s daughter, Barbara, Whitney Grace is credibly hospitable toward Ruth. But when Barbara learns that her married father is seeing someone else (namely, Ruth), she acts convincingly shocked.

Elliot Mahon, as Barbara’s devoted husband, David, and Jonathan Eisele, as Adi, a man of strong convictions, are among the other standouts in a large cast of talented actors.

The cast sings with zest, accompanied by recorded music. And they dance energetically, with synchronicity, while executing Oren Korenblum’s athletic and physically-demanding choreography. It reinforces the energy and optimism of these characters. Much of the show is derived from Israeli folk music and dance.

Josieu T. Jean’s projections include breathtaking depictions of the Israeli countryside. And K. April Soroko’s set evokes both the desert in Israel as well the rural landscape in the country. Simple, modest structures depict locations such as hotels in the urban areas. Appropriately, Israeli flags fly.

While Milk and Honey is not on the same level as Herman’s hit musicals, it takes us on a satisfying emotional journey. And its music is memorable, while allowing the characters to express themselves on a deeper level.

Another production of this show might not come around for quite a while. You might as well see a quality production. And that is exactly what The Wick Theatre offers.

The Wick Theatre’s production of Milk and Honey runs through Nov. 6 at the venue, 7901 N. Federal Highway in Boca Raton. For show times and ticket prices, go to https://thewicktheatre.thundertix.com/events/197575. You can also reach The Wick Theatre and Costume Museum by phone at (561) 995-2333. 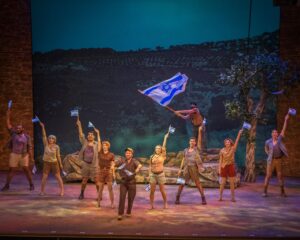