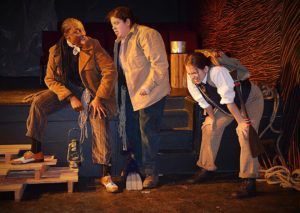 Nobody said a group of explorers in 1869 had it easy. But they proved fiercely determined, as Jaclyn Backhaus’ play Men on Boats demonstrates in Main Street Players’ production.

Yet, the two pieces are more similar than you might think.

Indeed, Lin-Manuel Miranda’s Hamilton recasts the country’s white founding forefathers as non-white characters. This serves as a metaphor for how immigrants and minorities can lead the way in creating major, beneficial changes for society and themselves.

Similarly, Backhaus’ historical play about a team of male, white Colorado River explorers in 1869 recasts them as women – many of them non-white.

Certainly, Backhaus decided to use her literary license to alter history in order to make a statement. Namely, today, when it seems women are quickly losing their hard-fought equality and respect, it becomes necessary to celebrate females. In particular, Backhaus uses the expedition’s feats as metaphors for how women can chart their own course toward success. Further, the playwright suggests that members of the female sex are equally adept at overcoming hurdles on their path to achievement.

No doubt, the explorers in this true(ish) tale faced – and in many cases defeated — adversity on their way toward discoveries, such as what we know today as The Grand Canyon.

Theatergoers can paddle along for this adventurous ride at Main Street Players’ Miami Lakes theater. There, Men on Boats (a previous New York Times Critics Pick) is

decked through Aug. 11 in an often-strong production.

This life-affirming, encouraging and touching play is laden with metaphor without sounding in the least bit inaccessible or deep. Rather, Men on Boats is a relatable piece that quickly ingratiates you to its characters and makes you want to cling to their side after the final curtain. And that is because these “men” are gritty, determined, humorous, vulnerable, fun-loving, charismatic and charming. Without question, they possess traits we might see in ourselves and other traits that we might aspire to acquire.

OK, they can act silly and argumentative. But that just adds to their humanity, foibles and all.

Now, a director of this play and its actors must find the right balance between conveying these folks’ foolish antics while not turning them into caricatures. Sometimes director Danny Nieves and this cast succeeds. But at other moments, the balance tilts too far toward caricature.

Of course, Nieves has complied with the playwright’s wishes. The cast is entirely female. And to their credit, they never try to impersonate men, even though their characters were males. Clearly, they sound like women, but not just women. They are strong, fearless, determined and ambitious female characters. Moreover, they clearly will not allow obstacles such as rough waters and food shortages from stopping them from making history. They’re determined to cement their names in history books by discovering amazing things and places – not just for themselves, but for future generations to enjoy, learn and marvel about.

The leader of this gang was John Wesley Powell, a U.S. soldier, geologist, and explore of the American West.

In Main Street Players’ production, Amy Lee Gonzalez deftly plays him with a commanding, orderly, respect-inducing manner. Her Powell is practically like a drill sergeant who speaks commands distinctly and forcefully. However, she stops short of inducing fear in those under her.

Without a doubt, this is a hard play to perform. That is true not only because it requires multi-faceted portrayals, but physical work. For instance, the performers, in this action-filled play, mime paddling down the river. And this requires them to put all their energy into this task.

In particular, the production’s performers grunt, twist, slide, squirm and contort their bodies, as reactions to the hard work and the harsh, unpredictable movements of the water. The actors wear telling expressions on their faces, suggesting, at turns, hard labor, fear, triumph and concern.

In fact, the very act of the performers paddling, looking as though they’re working up a sweat, is symbolic. Specifically, it can symbolize the hardships women have had to endure on their way toward achieving equality. Meanwhile, this action can also symbolize their desire to fight back against today’s society, government and its leaders, who seem intent on setting women back to nearly pre-suffragette times.

Fittingly, part of this mostly-minimalist set, which Sam Transleau designed, features ropes. It’s a literal and symbolic prop. Make no mistake – these characters are fiercely determined to break free from any shackles of limitations under which society has placed them.

While the cast members don’t attempt to sound like men, they deftly execute actions that some might identify as more masculine than feminine. Back slaps, firm handshakes and roughhousing abound among this adventurous crew, all of which increases their likability. For instance, their at- times laid back charm might bring to mind the musical Oklahoma. And it’s hard not to admire Powell, a one-armed explorer who, regardless, never resorts to self-pity. Rather, grit and determination suffuses this character.

Men on Boats takes place a distance west of the Sooner State, around and at what is today the Grand Canyon on the Colorado River. The play relates the tale of Powell and his crew. It comprised 10 explorers and four boats. Scenes on the river, featuring intense rowing and adventure, alternate with more laid back, conversational sequences.

Credit Nieves with alternating the pace, so that the contrast is clear, making the proceedings varied and interesting.  Also, the actors’ movement is varied and physical, suggesting rough waters. Sometimes, to reinforce that, more or more performers will take a tumble.  Also, each of the 10 actors create multi-dimensional portrayals.

One weakness comes when a couple of the explorers encounter members of a Native American tribe. The actors playing them are supposed to convey sarcasm, but Trittney Huzzie and Erin Wilbanks overdo it. In particular, they overact to the point that they’re more clownish than sarcastic, and their characters become caricatures. Rather than mugging, they need to earn laughs from the audience and inject more nuance into their line readings.

Meanwhile, Krystal Valdes, as she has done in other productions, at times endows her character with an almost manic energy. It can come across as overacting. However, Valdes is a performer with telling facial expressions which sometimes are more effective than words. And this performer knows how to act in a more understated manner when necessary.

On the technical side, lighting designer Amanda Sparhawk creates focus and deepens mood, while Angelina Esposito’s period costumes place us in 1869.

Upon entering the Main Street Players’ theater, you might not recognize it. That’s because the audience seating configuration is different for this intimate production. Indeed, actors get so close to the audience, you must be careful not to trip them. Some patrons sit on what is usually the stage. Meanwhile, others sit in the regular seating area. In between is a drop, which is the river in Transleau’s set design. Much of it forces us to use our imagination, as is often the case with live theater.

With the exception of a stool, some ropes, a barrel and planks, we must imagine that we’re looking into a river. Fortunately, sound designer Kevin Sage’s first-rate work allows us to more easily imagine a river setting.

Within that enviros, specifically the Colorado River, a group of strong-minded men proved to be troopers, discovering, among other things, what is today a beloved landmark – the Grand Canyon.

How refreshing it is, especially today, to suspend our disbelief for a couple of hours, and imagine that these pioneers were not men, but strong women who made history.

Main Street Players’ production of Men on Boats continues through Aug. 11 at the company’s theater, 6766 Main St. in Miami Lakes. General admission is $30, while students and seniors pay $25. Showtimes are 8 p.m. Friday and Saturday, as well as 2 p.m. Sunday. For tickets, visit mainstreetplayers.com or call (305) 558-3737. 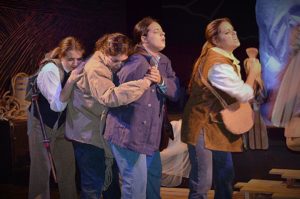 The characters in Men on Boats, despite being tired and worn, work through hard times.