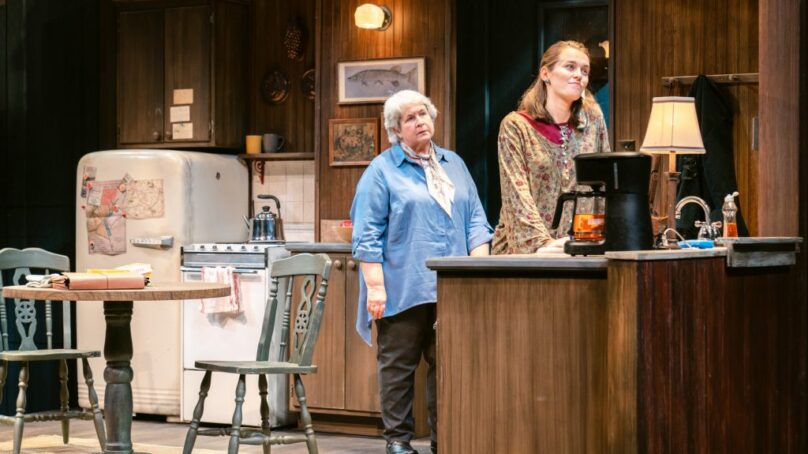 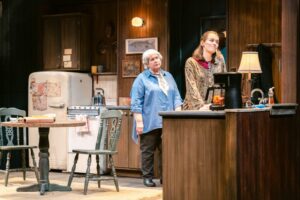 The ancient Greek playwright, Aeschylus, said: “There is no pain so great as the memory of joy in present grief.”

And we all deal with grief differently.

For instance, while someone might frequently visit a loved one’s grave, another person might suddenly run off to an isolated cabin in a far remote part of the mountains, shoot guns at nothing in particular, pour through stacks of newspapers, and feed and name the feral cats in the area.

At least, that is what Audrey Batten does in Bruce Graham’s funny, taut, touching, and timeless new play, The Duration. Through March 6, this three-character piece, which takes place shortly after the Sept. 11 terrorist attacks, is experiencing its world premiere in a laudable production by the professional, nonprofit company, Palm Beach Dramaworks (PBD).

In The Duration, Graham pairs compelling characters with a heartfelt, relatable story, timeless themes, and a lively writing style. The result is a layered, engrossing play.

Two of the three characters deal with grief in different ways. And to Graham’s credit, he does not judge them.

While The Duration explores dark, serious subject matter, it is never depressing. That is because Graham leavens The Duration with wisecracking humor.

“It’s Pennsylvania, Emma,” Audrey tells her daughter at one point, referring to the availability of guns. “If you’re under 18, you need a note from your mom.”

Audrey is a middle-aged history professor at a Catholic university. She has lost two dear people in 14 months. Her husband died in a drunk driving accident and her son, who worked in one of the twin towers, was killed during the Sept. 11 attacks. Despite her losses, she does not cry. In fact, Audrey never has, according to her daughter, Emma, a poet. In this way, she is the opposite of her late husband, who “cried all the time,” according to Emma. Perhaps her mother views crying as a sign of weakness, she adds.

One day, Audrey, who is consumed by hatred for the terrorists who killed her son, suddenly leaves her job and her home. She ends up in an isolated, remote cabin amid Pennsylvania’s Pocono Mountains, about 90 miles from New York City. However, the cabin is not as isolated as one might think. In addition to its location within driving distance of New York City, there is a town nearby.

“Once you learn to ignore the (right-wing) bumper stickers, it’s not a bad town,” Audrey says.

Meanwhile, Emma somehow learns of her mother’s location and rushes to her, worried. Running off to a remote location is unlike Audrey, and Emma wonders whether her mom has lost her mind. To investigate what is behind her mother’s action, Emma makes regular trips to the cabin. Another person who visits Emma, concerned, is the priest who chairs the history department at the university where they work. In fact, the priest, Father Douglas, is troubled by more than Audrey’s action.

In addition to visiting her mother, Emma attends regular sessions of a grief support group in Newark, N.J.  Graham alternates between scenes at the cabin and those at the support group. While Audrey would not step foot inside such a meeting place, Emma finds it useful to talk out her problems with strangers.

The Duration is about more than dealing with grief. For instance, it is also about a sometimes-tense mother-daughter relationship. In addition, the play touches on how we might impulsively react to a perceived or real threat to our well-being, and our desire to feel like we are making a difference in the world. Not surprisingly, Father Douglas, who refers to Audrey as “Aud,” possesses such a desire.

“Things are getting ugly in the world and I’m too busy pouring over curriculum changes and peer reviews to go out and try and make it better,” the priest says. “Not that I can make it better – I’m not that idealistic—but I’d sure like to just try.”

Chances are, we can relate to Father Douglas. When we feel powerless, or helpless, especially in today’s world, it can feel empowering to know that you can do your part, however small it might be, to better society.

Graham wrote The Duration in 2020. That is almost 20 years after the Sept. 11 terrorist attacks. Therefore, he wrote the piece with knowledge about what has happened in our post 9/11 world. But even if you knew when Graham wrote the play, you might still react uncomfortably to how prophetic The Duration sounds. For example, listen to Emma, speaking in 2001, to her support group.

“Twenty years from now, will compassion still be unpatriotic? Will xenophobia still be all the rage because once we open that door – once a generation or two accepts it, it’s open season. Arabs for a couple years then who knows. Jews. Hispanics. Canadians.  I honestly believe – and I know I’m gonna’ piss some people off here – that this country reacts to things like a four-year-old throwing a tantrum. Some radio stations, I’m not kidding here, have banned Walk Like an Egyptian. True story. Is that going to help the situation one bit? We Americans, boy, we love stupid gestures.”

Certainly, in light of recent school board decisions banning books, learning about a radio station banning a song 20 years ago taps into the zeitgeist. And with a rash of anti-Semitic incidents having occurred over the past several years, it can sound chilling to hear Audrey talk in 2001 about possible future attacks against Jewish people.

While Graham covers a considerable amount of material in his 90-minute or so play, there is little in The Duration that feels extraneous. In particular, one might laugh at Audrey taking care of feral cats outside her remote cabin, naming the felines, or the amount of space Graham devotes to the cats. However, if you think about it, the subject fits neatly in with the play’s themes. Perhaps the death of Audrey’s son re-kindled a desire in her to once again nurture living creatures.

Speaking of nurturing and protecting, one of the play’s most touching moments comes when Audrey fondly remembers a time when she and her husband were young parents. They had just brought their newborn twins home, and Edward Batten placed them in bassinets. Then, he sang a Stephen Sondheim song to them in a whisper. Nothing’s gonna’ harm you, not while I’m around…Nothing’s gonna’ harm you.

Unfortunately, however, we cannot act as mother bears for our children forever. It is a lesson that Audrey learns the hard way. “What was I gonna’ do – jump in front of the plane and stop it?” she says.

All three performers deliver the kind of earnest and nuanced performances we have come to expect in PBD productions.

PBD veteran Elizabeth Dimon lends Audrey a sharp-eyed, strong-willed, determined, and adamant air. In addition, Dimon, who speaks in a sharp voice, imbues the character with a tough exterior. You get the sense that tears are totally foreign to this wise-cracking woman. And when Audrey erupts in anger, it sounds natural. One of Dimon’s strongest moments on stage comes toward the end. The performer shuts her eyes, keeping them tightly closed. She is trying to make herself believe that, before his death, her son did not suffer. At this point in the play, Audrey is able to more easily express her emotions.

Caitlin Duffy, who is making her PBD debut with The Duration, delivers a similarly natural performance blessed with spontaneity. Like Dimon, Duffy’s Emma is equally forceful, suggesting this mom and daughter are alike. Duffy also imbues Emma with a sarcastic edge, but there is also deep concern and pain etched in the performer’s face.

As Father Kelly, John Leonard Thompson gives this priest an awkward, troubled demeanor. Perhaps he is more used to counselling people than expressing his concerns to others.

While The Duration is generally a strong play, it can leave people curious. One thing I wanted to know was how Emma found her mother’s location. Certainly, Audrey did not disclose it over the phone. Also, how long did Audrey stay at the cabin? If it was for an extended time, she sure did not pack much.

Nitpicking aside, The Duration delivers. It deserves a long, rich theatrical life.

Palm Beach Dramaworks’ world premiere production of Bruce Graham’s The Duration continues through March 6 at the theater, 201 Clematis St. in West Palm Beach. For times and tickets, visit https://www.palmbeachdramaworks.org. The phone number is (561) 514-4042.