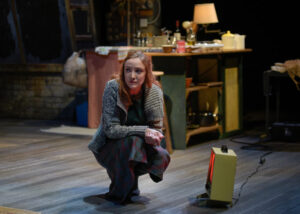 The last time audiences saw a production in person at Palm Beach Dramaworks, they saw Skylight. Here, Kyra Hollis (Sarah Street) is deep in thought in a scene from the play by Sir David Hare.

When Palm Beach Dramaworks (PBD) re-opens for in-person, live theater this coming October, with COVID safety measures in place, the company will present a fitting play. Indeed, Almost, Maine, by John Cariani comprises “nine vignettes about falling in and out of love and the desire to connect – “the ideal piece to mark PBD’s re-opening and the chance to reconnect with theater and with each other,” reads an e-mail sent to subscribers and others.

The last time PBD audiences saw each other in the theater on Clematis Street, the company featured David Hare’s Skylight, from Feb. 7-March 1, 2020. Today, more than a year since that production, PBD patrons can look forward to the company’s “Grand Re-Opening” this coming fall. All of the slated plays share at least one commonality.

“In this special season of renewal and new beginnings, we’ve chosen to focus, for the first time in our history, solely on plays written in the 21st century,” the aforementioned e-mail reads. “These are plays that ruminate on universal themes and subjects that seem to have a special urgency at this moment in time: love, longing, politics, race and racism, anti-Semitism, art, morality, aging, determination, resiliency, and courage.”

Specifically, the season will kick off with Almost, Maine, with opening night on Oct. 15 (PBD has not yet announced end dates for the productions).

Following Almost, Maine, the season will continue with Michael McKeever’s The People Downstairs, slated to open on Dec. 10. It explores the challenges brave individuals faced when they hid and took care of Anne Frank and seven others during the Holocaust.

Then, to open 2022, PBD will present Joanna McClelland Glass’s play, Trying. It’s a memory play based on the playwright’s stint as secretary to Francis Biddle, who served as FDR’s attorney general. Also, Biddle was a judge at the Nuremberg trials.

The fourth production, opening April 1, is Lynn Nottage’s Intimate Apparel. The play takes place at the turn of the 20th century and tells the story of a 35-year-old African-American seamstress. She enters into a correspondence with a man she’s never met in the hope of finding love.

The final production of the season, to be announced later, will open on May 27. It will feature a world premiere.

Out of the four plays announced, three have a history with PBD.

“Quite a number of you saw The People Downstairs when (PBD presented it) as a staged reading during our second annual New Year/New Plays Festival, or watched the Zoom reading last June,” the e-mail reads.

Originally, PBD planned The People Downstairs to premiere during the 2020-2021 season.

“We’re excited that, a year later, we will finally have the opportunity to produce the world premiere.”

Also, the company slated Intimate Apparel for its 20th anniversary season. “Instead, many of you saw the virtual reading that was part of our ‘Contemporary Voices’ series. We’re so pleased that we can finally bring you a full production onstage.”

Trying also is not new to PBD audiences. The nonprofit, professional company first produced the piece 15 years ago, “and it’s a play many longtime patrons speak of with great affection.”

By contrast, Almost, Maine is new to PBD.

“If you’re unfamiliar with it, suffice it to say that it’s one of the most produced plays in the country.”

Naturally, Almost, Maine won’t be the only new thing at PBD come fall. For instance, “to ensure the safety and well-being of everyone who steps foot into the theater,” the company is installing a new HVAC system throughout the building. It “complies with all the latest safety guidelines recommended by the CDC and the company’s consultant engineers.” In addition, PBD upgraded facility and ticketing procedures ‘to allow for as much of a touch-free patron experience as possible. Also, cleaning will take place more frequently and “numerous hand sanitization stations will be easily accessible.”

Producing Artistic Director William Hayes said: “We’re hoping these new protocols will put everyone’s mind at ease so that they just delight in being back in the theater and enjoy this great lineup of plays, without worrying about the air they breathe. However, we also recognize that some of you might be wary about sitting in a full theater and won’t be quite ready to return. If that’s the case, we may have to reduce the run of each play this coming season by a week. But we’re keeping the closing date flexible, depending on the response.”

Subscriptions are on sale. For ticket information, call the box office at (561) 514-4042, or visit www.palmbeachdramaworks.org.

GableStage selects its next leader