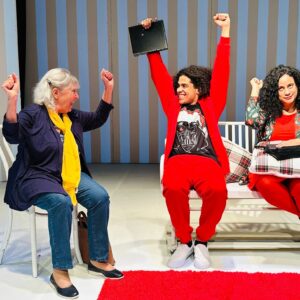 An interfaith family coexists peacefully while respecting and celebrating their differences in O Christmas Tree, a charming and cheery new play with music by Bree-Anna Obst and Nicole Stodard.

Certainly, it is refreshing to witness such harmony during the divisive time in which we are living.

While O Christmas Tree’s world premiere production has concluded, you can stream the production online through Dec. 31. The cost is “pay what you can,” although the producing company, Thinking Cap Theatre (TCT) recommends a minimum of $25 to stream.

The two women co-wrote O Christmas Tree, a new holiday play with music. It concerns a South Florida family who is part Catholic and part Jewish. In addition to holiday songs, the play includes original music by Angelina Lopez Catledge and Paul Curtis of the band HolaHi (http://www.holahi.net).

Frankie, a young boy, lives with his Catholic mother, Claudia, and paternal grandmother, Anne, who is Jewish. Frankie’s folks are divorced.

One holiday season, the family, which lives in the Miami area, decides to start a new tradition. Specifically, they plan to buy a freshly-cut Christmas tree from a Florida farm. It replaces the artificial tree which they have owned for eight years. While the artificial tree had a 10-year warranty, “I think it’s a goner,” one of the characters says.

So, Frankie, Claudia, and Anne hop in their car and drive to the Unicorn Hill Christmas Tree Farm near Gainesville. Actually, that farm existed. It just closed after operating since 1984, according to an article in tampabay.com.

At least in the play, customers can enjoy hot coco before choosing a tree from one of six species. Then, the family can watch or participate as their tree of choice gets cut down and strapped to their car’s roof for the journey home.

During the play, we learn about Christmas tree farms, among other topics. While the play is educational, we never feel that it is dry or lecturing us. Rather, “O Christmas Tree” is about one family’s traditions — and you may be surprised at how similar they are to your traditions.

For instance, the family devotes an entire day to decorating their home. Of course, a tree is a must in this household. “Without a tree, where would all the presents go?” the mother asks rhetorically.

No doubt, this play will whisk you back to your childhood. Did your parents read to you in bed? Well, in the play, Frankie, mom, and grandma snuggle in the same bed with “Christmas Farm.” Grandma reads out loud the book about how a Christmas tree farm operates.

Apparently, the book has a big impact on Frankie. That night, he has a vivid dream. It features falling gumdrops, snow in Miami, and many Christmas trees. After doing research online, Frankie learns that Christmas tree farms operate all over the U.S. – including Florida. Not surprisingly, the boy wants his own real Christmas tree.

And, so, the family hops in the car for a ride to the farm.

In TCT’s imaginative production, the family mimes riding in a car. Meanwhile, we see a Florida highway with cars and trees projected onto a screen. And it looks as though these characters are riding on that highway, which moves, along with the other cars, on the projected screen.

“Mommy, are we there yet? How much longer?” Frankie asks. Perhaps such a question will remind you of your childhood and games you played to make the time pass quickly.

Meanwhile, grandma’s complaint about her sciatica acting up may make you laugh in recognition, as audience members did during the reviewed performance.

“I’m an old lady, it’s my right (to complain)” she tells family members after they complain about her complaining.

Speaking of Grandma Anne, she, like Jewish people worldwide, celebrates Hanukkah. It is the Jewish festival of lights, which lasts eight nights. Specifically, the holiday commemorates the recovery of Jerusalem and the subsequent rededication of the Second Temple at the beginning of the Maccabean Revolt.

When, at the time, Jewish people sought to light the Temple’s Menorah (seven-branched candelabrum), they found a single cruse of olive oil that had escaped contamination by the Greeks. Miraculously, they lit the menorah and the one-day supply of oil lasted for eight days. Therefore, Jews, to this day, light eight candles, one for each night, during Chanukah, which occurs annually in December. This year, the eighth night of Chanukah will coincide with Christmas day.

In O Christmas Tree, we learn that people spell Chanukah in English more than one way; none of them are necessarily correct. Specifically, there is “Chanukah,” “Hanukkah,” and other spellings.

Grandma boasts about her “luscious latkes.” They are potato pancakes fried in oil. This reminds Jews of the miracle of the oil associated with Hanukkah.

While erecting a tree is not among Chanukah’s customs, Grandma erects her own tree in celebration of the holiday and places it next to her Menorah. On the tree, she hangs Jewish stars.

While one might wonder why a real-life child actor was not cast as Frankie, adult actor Phillip Andrew Santiago portrayed Frankie believably with child-like wide-eyed wonder, curiosity, and energy. Under Stodard’s careful direction, he kneeled by his mom when Frankie asked for something, as though kneeling would help convince her.

Speaking of mom, Angelina Lopez Catledge imbued her with believable passion, a mother’s affection, and a flair for the dramatic.

While Grandma Anne complains during the play, Carol Sussman did not turn her character into a bitter or self-pitying person. Rather, the actor lent the character a playful, enthusiastic streak and a sense of humor that would endear her to anybody. Grandma calls her grandson “Bubele,” which, in Jewish communities, is a term of endearment akin to “darling” or “sweetie.”

Likable and identifiable characters populate O Christmas Tree. They also include Farmer Tom. Steven A. Chambers portrayed him with a casual, folksy, and friendly demeanor.

Behind the scenes, Alyiece Moretto-Watkins used simple set pieces to establish the locales in the play. The minimal scenic design allowed us to concentrate on the characters and the story. Similarly, Obst’s realistic lighting design did not call too much attention to itself. The design was effective in that it illuminated and focused the actors, who wore Stodard’s costumes, which sported the colors of Christmas.

Obst and Stodard also designed the projections. They made us feel as though the “car” in the play was actually moving amid the real cars on the projected roadway.

O Christmas Tree, while charming and cheerful, has room to improve. For instance, further character development and more conflict might result in a more complete, satisfying emotional live theater experience.

While traditional holiday plays such as A Christmas Carol and A Christmas Story are always welcome, it is also nice to experience something new.

In the final analysis, O Christmas Tree is a fresh and invigorating play that has remove to expand and improve. Hopefully, it enjoys a long theatrical life.

For more information about TCT, go to thinkingcaptheatre.org or https://www.facebook.com/ThinkingCapTheatre. 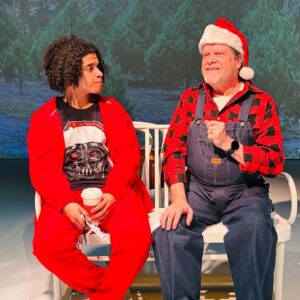 Frankie (Phillip Andrew Santiago) and Farmer Tom (Steven A. Chambers) get to know each other.

A fine cast shines in ‘The Full Monty’ in Lauderhill