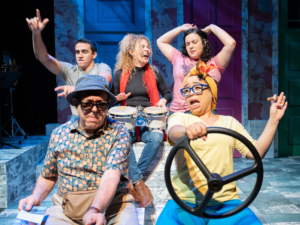 Cast members appear in a scene from the world premiere production of GringoLandia.

If you talk to Miami native and Cuban-American playwright Hannah Benitez about Cuba today, she might quote a saying. It goes something like this: “If you visited Cuba and had a great time, you didn’t see the real Cuba.”

Benitez says that in her newest play, GringoLandia, she attempts to show audiences “The Real Cuba.” Specifically, it is one in which, among other things, the locals are struggling and sex tourism is operational.

GringoLandia is experiencing its world premiere production through Jan. 30 at Miami’s Zoetic Stage. It is a nonprofit, professional company in downtown Miami. In fact, Zoetic commissioned the play.

Benitez should know about the “real Cuba.” After all, she has frequently traveled to the island country, where her father is from, since around 2017.  That is the year that GringoLandia takes place. In addition, 2017 is when Cuba “really opened up” for visitors, Benitez says.

The play’s title, she says, is a term that people in Latin America and the Caribbean use to refer to the United States. In fact, Benitez says some people view the phrase as taboo. While the term “GringoLandia” refers to the U.S, it also refers to “Americana,” or things associated with the culture and history of America.

In the play, a Cuban man, accompanied by his millennial children, returns to the country from which he escaped 50 years ago. In particular, he is returning to Cuba on a quest to recover a precious family heirloom.

“Through a series of misadventures with funny and fascinating locals, Carlos, Michi, and Danny find themselves in a place frozen in time, but surprisingly familiar,” a description of the play reads. In it, Benitez “explores the collision of two worlds, and the importance of accepting our past in order to move into the future.”

In many ways, Cuba is the play’s antagonist, she wrote in the script. The country is an antagonist “not because Cuba, nor the Cuban people, are the enemy.” Rather, “because the systems of the country are what technically (in a dramaturgical sense) provides our characters, including the Cuban-born ones, with their obstacles. Perhaps if we engage with the story (while) keeping this in mind, we (I’m looking at you – citizens of the ‘developed world’) can fully exercise our empathy, political, and global muscles.”

Benitez says inspiration came from her experiences, and imagination. Ultimately, “it’s about closure. It’s about saying goodbye to a generation in your family.”

However, the playwright says that GringoLandia is “really funny.” In fact, she did not realize how funny her play really is until it experienced a couple of readings.

Benitez, whose roughly 10 plays vary widely in theme and tone, says using humor offers the quickest path into an audience’s hearts. Namely, humor lowers an audience’s defenses. Then, with their guard down, a playwright can “prick” them with more poignant, serious moments.

GringoLandia’s serious themes include closure, family, and American identity. Also, sex tourism is a major topic in the play. Specifically, sex tourism refers to the practice of traveling to foreign countries, often on a different continent, in order to engage in sexual activity or relationships in exchange for money. Sex tourism has existed in Cuba, before and after the 1959 Cuban Revolution.

But if you travel to Cuba, you likely will not see the country’s dark side. The playwright says that is because Cuban government officials meticulously dress up the country. In fact, they do so to the point that tourists feel as though they are visiting a beautiful place.

What does Benitez want audiences to take away from GringoLandia?

“I’m not one to ever tell my audience what to feel,” she says. “And I think that for this play, as with any story that deals with Cuba, everyone’s going to walk away with a really different feeling.”

GringoLandia has experienced two readings. There was one in 2018 in Miami, and another at New York City’s Teatro LATEA, around January of 2020. The latter is an intimate theater for Spanish and English productions, from classic plays to experimental pieces.

Audiences were present at both readings, and responded positively to the play, Benitez says. One common response was “I didn’t expect it to be so funny.”

In the play, comedy takes the forms of one-liners and uncomfortable situations. Benitez says the Miami audience and the one in New York laughed at different things. Perhaps that was because there were less Cubans in the New York audience, she adds.

The playwright says she has been frequently revising the play. Actually, she enjoys doing rewrites.

“It feels great,” Benitez says. She adds that it “feels like going to the spa” and “gives me joy and pleasure.”

Benitez has been writing plays for a decade, and has been acting for that long.

“I make people laugh. I challenge the topical,” Benitez wrote on her website, hannahbenitezwriter.com. “Then I flip and do the opposite. No apologies. My stories (are) violently different from each other. Some have Spanish language. All are female and POC (People of Color) heavy. Right after I take something way too seriously, I’ll write a flippant comedy.”

Benitez says that reading other plays made her want to become a playwright. She has always been an avid reader, of plays and fiction. In fact, as a youngster, she would go to the library for fun. And she would get in trouble because she returned books late. The artist, who admits to possessing a “wandering imagination,” attended a performing arts school. There, she performed and took creative writing.

Benitez describes her family as a “Classic Miami Cuban family.” Some relatives live in Cuba, while others live in the U.S.

Speaking of family, at least 20 relatives are coming to see the show on the same night. As a result, she is “trepidatious, but also excited.”

The world premiere production of GringoLandia runs through Jan. 30 at the Adrienne Arsht Center for the Performing Arts of Miami-Dade County. The address is 1300 Biscayne Blvd. For performance times and tickets, go to https://www.arshtcenter.org/en/Tickets/Calendar/2021-2022-Season/Theater-Up-Close/GringoLandia.