Measure for Measure’s ‘In the Heights’ is touching, electric 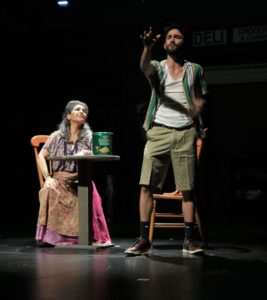 Abuela (Sophia Molfetas) and Usnavi (Spencer Landis) perform in Measure for Measure Theatre Company’s production of In the Heights.

Of course, it’s important that we sense those strong ties. That’s because this show is ultimately about the importance of community and the need to feel that we belong someplace.

And in this musical, for at least one character, that place is Washington Heights. It’s a real-life, vibrant, small, yet tight-knit, predominantly Hispanic community on the northern edge of Manhattan.

While a credible aura of harmony often reigns in this production, there are equally convincing moments of discord. In addition, just like in real life in any locale, upbeat times alternate with somber ones.

Indeed, Miranda (music and lyrics) and Hudes (book) never pretend that Washington Heights is any place special. For that matter, neither does director Daimien J. Matherson seek to glorify this community, where Miranda, of Hamilton fame, grew up.

For instance, the set is rather modest. It consists of a few red brick store fronts, an innocuous two-story house and a clothesline.

Perhaps to emphasize the universality of the show’s themes, Matherson opted for a set on the sparse side.

But if this production, running through Nov. 10 at the Sunrise Civic Center, seems thin scenery wise (there isn’t even a hint of a New York City backdrop or skyline), Matherson and Co. makes up for it in spirit. That is especially the case in the second act. It is filled with authentic emotion and an infectious, driving Latin beat.

However, this production needs more verve in the first act. During the opening, title song, Spencer Landis as Usnavi appears to lack energy. It is hard to hear him and others during the opening song and at different points throughout the first act. Perhaps that’s a result of a too-vibrant live orchestra, whose musicians sit atop the set.

With that said, some of In the Heights’ music can seem intimidating. While the score encompasses several genres, including  salsa numbers and traditional musical theater songs, Usnavi raps some of the lyrics. Generally, Landis knows which words to emphasize and where to pause. He just needs to imbue his character with more charisma and confidence, particularly in the first act.

On the positive side, Landis improves markedly during the second act. In fact, he sings powerfully and with touching, authentic emotion in numbers such as “Hundreds of Stories.” This is a duet with his Abuela (Spanish for grandmother). In the song, the pair discuss how they might use a large sum of money from a winning ticket which Usnavi sold in his store.

A loving, convincing chemistry exists between grandmother and grandson. This is the case, even as the young man sings with palpable anguish about painful memories and harsh, present realities.

While Usnavi and the others celebrate their culture and the pride in their neighborhood, they’re facing heat. That is, literal and figurative heat.

As a matter of fact, it is so hot that the temperature takes a toll on the power grid. It breaks, causing a blackout. Several characters are also nearing the breaking point. They include Nina, the first in her family to attend college. Financial difficulties caused her to drop out, much to the shock and dismay of her parents. They become strongly conflicted. Do they sell their business and use the money to send her back to college?

Such difficult conflicts drive the story, as do the characters’ desires. Each strongly wants something. In general, intense desires, combined with strong conflicts, drive compelling drama.

In the Heights also boasts songs that not only possess an infectious beat, but move the plot forward. Further, they help characters express strong emotions, when words alone are insufficient for this purpose.

Francine Birns, as Nina’s mother, Camila, is at her strongest while singing “Enough.”

Up until this point in the second act, this strong-willed woman has maintained her composure. But everyone has a boiling point, and Birns conveys her character’s with impressive spontaneity and force without acting unnaturally forceful. She can no longer handle her family’s difficulties. Words alone cannot express her frustrations. So, she tears into her family through song, showing the power of music in musical theater.

Meanwhile, Larry Buzzeo, as Nina’s father, Kevin, offers one of the production’s strongest acting performances. With impressive nuance and natural passion, he conveys pride without arrogance and love for his daughter without sentimentality. When his character becomes angry, Buzzeo proves up to the task, without making Kevin unlikable.

Then there’s Sophia Molfetas as Abuela. The performer lends grandma a sense of dignity and a loving personality. But the performer also demonstrates her ability to deliver strong emotions without overdoing it.

Meanwhile, in a seemingly “minor” role, Tommy Paduano as the “Piragua Guy” sells a Puerto Rican shaved ice dessert. He loudly and comically, yet honestly goes about peddling his product. Hey, it’s part of the community’s tradition and he and the others rightly take it seriously.

In the musical, Usnavi faces a dilemma. Does he return to his homeland or remain in America?

It’s a choice characters in many shows face.

Indeed, In the Heights isn’t a groundbreaking musical, even as, along with the more revolutionary Hamilton, it has helped usher in rap as a legitimate genre in musical theater.

Still, In the Heights deftly conveys universalities of the human experience, even as it captures the specifics and uniqueness of a particular culture.

Certainly, you don’t have to know what a piragua is to enjoy and find meaning within In the Heights.

Measure for Measure Theatre Company’s production of In the Heights runs through Nov. 10 at the Sunrise Civic Center, 10610 W. Oakland Park Blvd. in Sunrise. Performances are at 8 p.m. Thursday, Friday and Saturday as well as 2 p.m. Sunday. General admission tickets cost $38. A special rate of $25 is reserved for students, industry members, seniors, members of the military and Sunrise residents. Call (954) 747-4646 or visit measureformeasuretheatre.com. 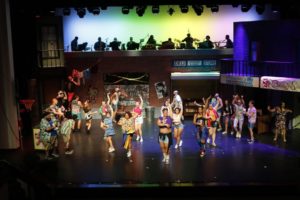 The cast of Measure for Measure’s production of In the Heights performs a number.