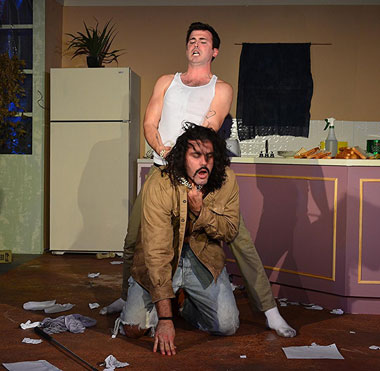 MIAMI LAKES — The aroma of freshly toasted bread wafts throughout the Main Street Playhouse’s intimate theater space. If you didn’t know better, you’d swear the sweet lady of the place prepared it with love and care for her children.

Certainly, you wouldn’t think that a chaotic, war zone-like environment served as the “kitchen.” Yet, that is where a drunken, suddenly-turned thief in a crazed state prepared the golden-brown stacks of buttered toast.

In fact, it’s hard to assume anything when you’re watching a play by the prolific Sam Shepard. No question, people and places can be two-sided in Shepard’s plays.

This duality of strong production values and weaker ones presents itself in the professional Miami Lakes company Main Street Players’ production of True West, running through Sunday, Oct. 20. The play deals with questions such as what is art and, if the Wild West exists, what is its true nature.

Surely, one of the strong points of this mounting is Austin’s transformation. Over the course of the play, he changes from a calm, content family man and artist into a wildly drunk, desperate person after plans for his screenplay fall apart.

As Austin, Tyler Grimes, who nails Shepard’s dark humor, undergoes a convincing transformation until we hardly recognize him. Grimes’ Austin slowly becomes more annoyed and agitated until he’s an incoherent, wobbly, babbling mess, lying, laughing and rolling on the floor. We can’t help but wonder: Is this the same mild-mannered, somewhat nerdy, seemingly studious individual with glasses in act one, his eyes riveted on his typewriter?

Of course, it’s an understatement to say that Austin’s older brother, Lee, can have a negative effect on people. Now, that’s not to say he’s had many opportunities for interaction. The older sibling is a desert drifter, an unrefined brooder. He has followed in the path of his drunken nomadic father (unseen, but who looms large in the play).

Chances are, Lee’s wanderings out in the open, specifically the desert of 1980s Southern California, has brought out his primitive side.

And as Christopher Millan embodies Lee, he’s akin to a ferocious, uncontrolled wild beast. Millan’s Lee is more mountain lion than the yapping coyotes we hear in the distance, luring and then killing the suburban residents’ Cocker Spaniels.

With wide, dangerous-looking, piercing eyes and a practically growling low voice, Millan’s unpredictable Lee resembles a hoodlum from a dark alley. He leans forward as though he’s ready to pounce, and shoots accusatory glances at Austin. No doubt, it’s enough to make anybody’s blood run cold.

While Millan lends Lee a ferocious impulsivity and desperation, he strangely exaggerates some of his line readings through an odd, sing-songy voice. Moreover, he talks too fast at times and shouts too often, at least in Act One. As a result, some of the key plot points are missed. To his credit, Millan instills a wildness and frightening menace in Lee. However, it sometimes sounds and looks as though he’s been roaming a jungle, not a desert in the west.

By the second act, Lee’s hasn’t transformed as dramatically as his younger brother. However, during the play’s latter half, a few scenes reveal that deep down, a bond exists between the brothers. Suddenly, a glimpse, however brief, of Lee’s humanity shines through. Man, indeed, possesses a dual nature, as Shepard reminds us.

Under Isaac Polanco’s direction, we witness the brothers tenderly place their foreheads together. But make no mistake; these are warring siblings, especially after Lee suddenly reveals he possesses some artistic abilities himself. At least, that’s his opinion and the belief of movie producer Saul Kimmer (an oddly over-dramatic Kent Harris).

But is Lee’s screenplay trashy and Austin’s worthy? And does the nomadic sibling’s work accurately depict the “Wild West?” Does such a place or idea even exist, and what is its true nature? For that matter, what is considered “art” and who decides? And how do you define the “American Dream?” Is it a myth that’s unattainable?

Shepard, without offering easy answers, asks such questions in “True West.” It is one of the prolific writer’s more naturalistic plays. Even so, the unpredictable violence and intense emotion lend the piece an air of non-realism. Indeed, within the late, great, multi-award-winning playwright’s worlds, the familiar and expected can quickly turn into the surreal and unpredictable. For instance, characters can blindside us by revealing sides of themselves that we never thought existed. In addition, places can transform from tranquil, cozy suburban settings to primitive, jungle-like battlefields, where wild animals might as well roam. Unfortunately, Main Street Players’ production does little to reinforce this quality through technical elements. In fact, Amanda Sparhawk’s lighting is mostly homogeneous and realistic.

One of the few exceptions occurs between scenes. Specifically, in an effort to emphasize a surrealistic-like aura, during one transition, stagehands walk across the stage in a robotic-like state, trashing the place. Of course, plenty of physical scenes occur between the performers. They rip and tear household items to shreds, fling themselves across the floor and nearly kill each other. As a matter of fact, the scenes are so fast-paced and violent, you fear for their safety. Yet, thankfully, director Polanco ensures it all amounts to controlled chaos, so that nobody gets hurt.

But, Polanco and the performers don’t use the pauses in Shepard’s script to quality effect. Silent moments can greatly enhance a sense of tension and menace in “True West,” a la playwright Harold Pinter’s pauses. Yet, those in Main Street Players’ production aren’t drawn out enough.

On the plus side, Grimes, who also did the sound design, creates enough foreboding effects to ratchet up the tension. Grimes’ work includes the seemingly-authentic yapping of coyotes in the distance, gathering in number and killing pets.

Meanwhile, Sparhawk, who doubles as the set designer, has created a playing space wide enough for the physical scenes to safely play out. Further, the set reinforces dichotomy often present in Shepard’s work. Indeed, if you look at one-half of the set, you think you’re witnessing a play characterized by “kitchen sink” realism. Authentic-looking cabinets, a refrigerator, sink and various household items not only look real, but appropriately place us in the 1980’s. In addition, this part of the set can symbolize Austin’s built-up, civilized world.

Meanwhile, another part of the set suggests a more pastoral, open landscape, with plants as well as openings to the outdoors and nature. It hints of the more primitive character the house will assume once the fierce battle between the brothers begins in earnest.

Surely, it’s a messy battlefield akin to the “Wild West” (if such a thing exists) in which you don’t expect freshly-made toast to pop out of the toaster.

And one might not expect two brothers, so different in nature, to assume the personality of the other.

Welcome to the strange but vibrant world of Sam Shepard, if you’re a newbie.

Main Street Players’ production of True West runs through Sunday, Oct. 20 at its theater, 6766 Main St. in Miami Lakes. Showtimes are 8 p.m. Friday and Saturday as well as 2 p.m. Sunday. Tickets are $30 for general admission and $25 for students and seniors. For more information, (305) 558-3737 or visit mainstreetplayers.com. 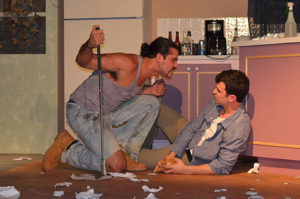