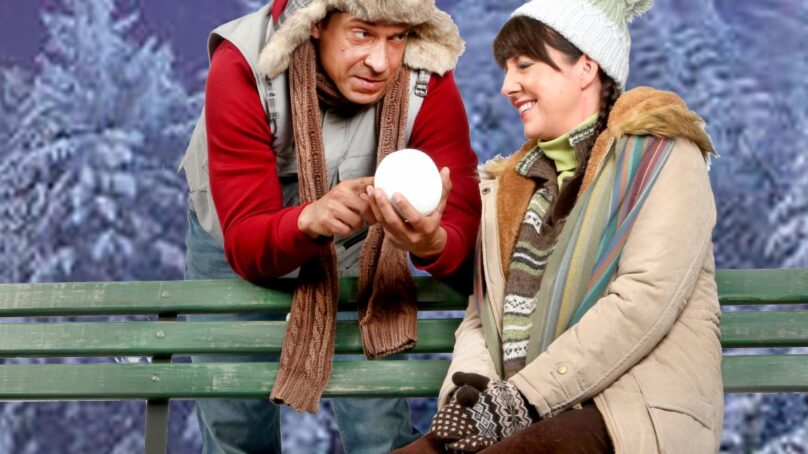 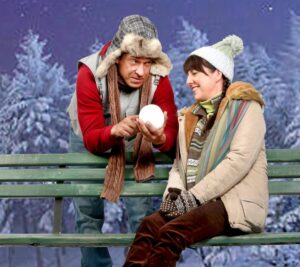 For years, Palm Beach Dramaworks resident director, J. Barry Lewis, has wanted to stage Almost, Maine. In fact, it is one of the American theater’s most produced plays, and a piece that theater companies worldwide have performed. But, for one reason or another, Palm Beach Dramaworks (PBD), a professional, nonprofit company in West Palm Beach, has not gotten around to mounting the play.

However, this month, it finally will. And Lewis, as well as others at PBD, are excited.

“Almost, Maine is the perfect antidote to this miserable pandemic,” said Bill Hayes, PBD’s Producing Artistic Director. “It’s a play that celebrates the simplicity and complexity of love, and the beauty and necessity of human interaction.”

“I was quite taken with it as I read it,” Lewis said. He added that the play “almost feels like a valentine to the audience.”

Set in a remote, far-north town

On Almost, Maine’s website, https://www.almostmaine.com, the following description appears: “Welcome to Almost, Maine, a town that’s so far north, it’s almost not in the United States – it’s almost in Canada. And it almost doesn’t exist. Because its residents never got around to getting organized. So it’s just…Almost.

“One cold, clear Friday night in the middle of winter, while the northern lights hover in the sky about, Almost’s residents find themselves falling in and out of love in the strangest ways. Knees are bruised. Hearts are broken. Love is lost, found, and confounded. And life for the people of Almost, Maine will never be the same.”

By the way, Almost, Maine is a fictional town.

Nine mostly joyful, yet poignant stories connected by time and place comprise the play. Each vignette in the piece takes place in exactly the same timeframe. During that timeframe, the play’s 19 characters experience the discovery of love.

In Almost, Maine, “something magical takes place that allows the playwright and characters to explore human conditions in a very unique way,” Lewis said.

That “something magical” might have to do with the Northern Lights. They are the “beautiful dancing waves of light that have captivated people for millennia,” text on www.space.com reads. “But for all its beauty, this spectacular light show is a rather violent event. Energized particles from the sun slam into the Earth’s upper atmosphere at speeds of up to 45 million mph, but our planet’s magnetic field protects us from the onslaught. As Earth’s magnetic field redirects the particles toward the North Pole, the dramatic process transforms into a cinematic atmospheric phenomenon that dazzles and fascinates scientists and skywatchers alike.”

According to forbes.com, the best places in the world to see the Northern Lights are closer to the Arctic Circle. They include places such as Alaska, Canada, Iceland, Greenland, Norway, Sweden, and Finland. Due to longer hours of darkness and clear night skies, December through March is usually the best time to observe the Northern Lights. However, one can sometimes see them starting as early as August.

Author has a ‘unique perspective’

Lewis said he has met the playwright, John Cariani. However, this will mark the first time he directs one of Cariani’s pieces. Lewis has been working in live theater for “well over 15 years” and has directed “well over 40 productions.”

“I think he has a unique perspective looking at people from his own perspective growing up in a small town in Maine,” the director said. “I think John has knowledge of these very good hardworking people and is able to capture them on stage. I think it’s good theater.”

In addition to playwrighting, Cariani is also an actor. Many people might remember him from Law & Order as forensics technician Julian Beck.

A sense of magic and hope

“That’s a huge challenge and a great deal of fun for an audience to observe how an actor changes from one scene to the next,” Lewis said.

Actor Niki Fridh, who plays four different characters, said that performing in Almost, Maine presents a particular challenge. Specifically, the differences between the characters are subtle. Therefore, performers must find a way to convey those subtle differences.

What does she hope audiences will take away from the play?

“I hope they walk away with a sense of magic and hope,” Fridh said. “I think it has the potential to be a really beautiful and moving piece.”

Fridh has never acted in Almost, Maine. However, she has not only heard of the play, but witnessed scenes of it playing out on stage while she adjudicated a high school thespian competition.

Speaking of high school, Almost, Maine was the second-most produced play in North American high schools in 2020. And for nine of the previous 11 years, it topped the list.

Since the play premiered in 2004 at Portland Stage Company (naturally in Maine), the piece has received 80 professional productions in 27 states. Also, Almost, Maine has received mountings more than 20 times around the world – everywhere from Canada and England to Australia, South Korea, Israel, Mexico, Romania, and Russia, among other places.

Actor Brandon Morris, who will appear in the production, plays five different characters. The play “has a lot of variety and there’s something for everyone,” he said.

Morris said he hopes audiences “will have a laugh or two,” that the play touches them, and that they leave with “a little hope.”

Cariani wrote Almost, Maine thanks, in part, to a director who saw a show that the playwright and his friends performed at different times in New York. The director, Gabe Barre, noticed the “odd, funny, sad, romantic, and anti-romantic little plays and sketches that comprised the evening,” according to a biography of Barre.

A few nights later, Barre and Cariani discussed those little plays and sketches. Barre asked if he could take a look at them. Cariani gave him permission to do so, and Barre noticed many of the pieces were surreal love stories. All of them took place on a cold winter’s night “in a strange little non-town in far northern Maine.”

Almost, Maine will run on PBD’s stage from Jan. 12-30, with specially priced previews at 7:30 p.m. on Jan. 12 and 13. The theater will require all audience members to wear masks that completely cover the nose and mouth. PBD will also require documentation, printed or digital, as proof of full vaccination. Or, audiences can present proof of a negative COVID-19 PCR test result conducted within 72 hours before the performance, or a negative COVID-19 Antigen test result conducted within 24 hours before the scheduled performance start time. PBD will require matching photo ID for everyone 18 and older. For more information, visit palmbeachdramaworks.org Or, call (561) 514-4042. PBD is located at 201 Clematis St. in West Palm Beach. 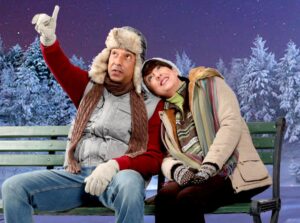