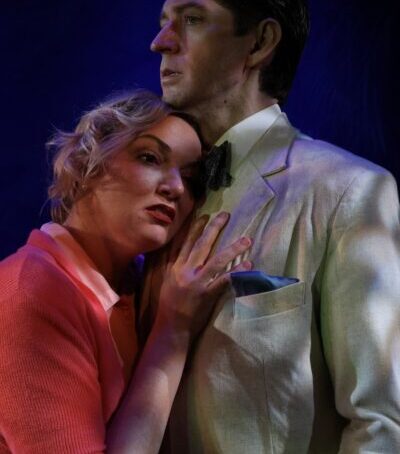 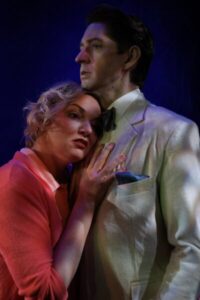 Family members argue over inheritance after a relative passes away.

Of course, judging from the aforementioned, both of which happen in Tennessee Williams’s one-act play, Suddenly Last Summer, the piece sounds like an accessible one to which many should be able to relate.

But when you consider that cannibalism and a surgical procedure called a lobotomy figure significantly into the melodramatic Suddenly Last Summer, you might hesitate.

Certainly, some people, especially those with a tendency toward queasiness, will pass immediately. Others might keep a more open mind.

Whichever group you fall into, South Florida theater fans have a rare chance to see a production of the poetic, richly symbolic, layered, yet seldom-seen play, Suddenly Last Summer.

In fact, it is a mostly respectable production by the bold, professional, nonprofit, Ft. Lauderdale-area company, Island City Stage. The production runs through April 17.

Suddenly Last Summer may not be a frequently-staged piece. However, literary critic Harold Bloom ranked it among the best examples of Williams’ lyricism. Further, Williams himself has said that he thought the play was “perhaps the most poetic” of all those he had written. And keep in mind, Williams is the late, legendary playwright who penned masterpieces such as the Pulitzer Prize winning A Streetcar Named Desire and Cat on a Hot Tin Roof.

Suddenly Last Summer takes place in 1936 in New Orleans’ Garden District. Specifically, we are in the backyard of a mansion of Victorian Gothic style. Some may recall the story from the 1959 film with the same title, starring Elizabeth Taylor, Katharine Hepburn, and Montgomery Clift.

When the piece begins, a doctor has arrived at Violet Venable’s home. She is an elderly socialite widow from a prominent family who invited the caregiver over. Venable offers to make a generous donation to support the doctor’s psychiatric research. That is, if he will perform a lobotomy on her niece, Catharine. This is a form of psychosurgery, a neurosurgical treatment of a mental disorder that involves severing connections in the brain’s prefrontal cortex.

Catharine has remained confined to a private mental asylum since the previous summer. At that time, Catharine allegedly witnessed her cousin Sebastian’s violent death while in Spain with him. Catharine claims that a mob of starving children mutilated her cousin and devoured him. Nonsense, claims his mother, Mrs. Venable. She is eager to “shut her (niece) up” once and for all by having the doctor perform a lobotomy on her.

It is difficult to know whom we should believe regarding Sebastian’s life, much less death. After all, neither woman appears to be in her right mind.

Was Sebastian a loveable, brilliant poet and adored son, as Mrs. Venable claims? Or was he a homosexual predator who used his female relatives as bait to lure men for his sexual pleasure? Why did the mob kill him? Were they the same individuals whom Sebastian lured for sex with the help of his female relatives?

It would have been nice to hear from Sebastian himself, yet that is obviously impossible. That is, unless of course, Williams chose to include Sebastian’s ghost as a character. It would hardly have been the first time that a playwright included a ghost as a character. Without Sebastian or his ghost, Suddenly Last Summer is essentially a “she said-she said” mystery. And its lame ending does nothing to offer anything close to a motive, or explanation.

What we do get from Suddenly Last Summer is intense drama. For instance, Sebastian’s family fights for the money that he supposedly left for them in his will. The problem is, Mrs. Venable threatens to keep the money in probate until an answer about her son’s death satisfies her. And Sebastian’s family members cannot afford to challenge Mrs. Venable.

Of course, drama also exists in the form of tension between Mrs. Venable and Catharine. Throughout the roughly 90-minute play without an intermission, the two offer competing portraits of Sebastian. Also, Catharine hints throughout the play about the details surrounding her cousin’s death.

At times, Suddenly Last Summer seems like a trial, with the invited doctor, like an attorney, questioning Catharine about last summer and Catharine, the “witness” answering his questions. It all leads up to Catharine’s full revelation of the lurid details surrounding Sebastian’s death.

Suddenly Last Summer also offers enough rich symbolism to qualify as literature. The fact that Williams describes Sebastian’s garden as a “jungle” is symbolic in itself, suggesting his wild and violent death. At times, when Catharine mentions lurid details about that summer, we hear wild noises from the jungle. By contrast, when Mrs. Venable presents a book containing her late son’s writing, we hear the sound of a sweet-singing bird.

In the play’s script, Williams describes the garden as “more like a tropical jungle, or forest, in the prehistoric age of giant fern-forests when living creatures had flippers turning to limbs and scales to skin. The colors of this jungle-garden are violent, especially since it is steaming with heat after rain. There are massive tree-flowers that suggest organs of a body, torn out, still glistening with undried blood; there are harsh cries and sibilant hissings and thrashing sounds in the garden as if it were inhabited by beasts, serpents, and birds, all of savage nature.”

But in Island City Stage’s production, much of the detail that Williams describes is absent from the scenic design. Instead, scenic co-designers Andy Rogow and Ardean Landhuis have surrounded the simple set of chairs and a small bench with simple foliage depicted on walls, as opposed to the kind of live plants Williams describes. It is as though the foliage encloses the characters in their environment outside the mansion.

Also, we hear seemingly authentic, wild, and intense sounds coming from the “jungle.” The noises come courtesy of sound designer David Hart. Most of the sounds come toward the end of the play, when Catharine describes in detail the events leading up to, and including Sebastian’s death.

Meanwhile, lighting designer Preston Bircher’s hues include green, which blends in nicely with the greenery in the set.  Unfortunately, we are unable to see Mrs. Venable’s expressions as Catharine reveals details at the end of the play. Instead, the lights are all on Catharine.

Under Rogow’s smart direction, the tension is thick and emotional moments truly land. In the script, Williams notes that it is steaming hot outside. With that in mind, it would not have hurt to have the actors fan themselves with real fans, or at least their hands.

The stars of this production are Angie Radosh as Mrs. Venable and Jeanine Gangloff Levy as Catharine.

Radosh, speaking in a commanding voice, imbues Mrs. Venable with grace and fierce pride, especially when the senior citizen talks about her son. At these times, her voice seems choked with pride. In addition, credible-sounding pain, bitterness, and anguish escape the character’s voice during more upsetting moments for Mrs. Venable.  We get the sense that she is trying to hold on tightly to any dignity she has left.

To her credit, Levy, as Catharine, does not “act crazy” to fit stereotypes. Instead, Catharine seems frustrated, overwhelmed, and restless. Levy’s Catharine shoots Mrs. Venable bitter, accusing looks. There is hatred in Catharine’s dark, wide eyes. And we hear convincing anguish escaping her voice as she believably bawls.

The rest of the cast is mostly solid, except for Laurie Tanner, as Miss Foxhill. The performer was hard to hear or understand during the reviewed performance.

For those hoping for an alternative explanation, beyond the literal meaning, for the cannibalism in this play, Williams has one.

“Man devours man in a metaphorical sense,” the playwright has said. “He feeds upon his fellow creatures, without the excuse of animals. Animals actually do it for survival, out of hunger…I use that metaphor (of cannibalism) to express my repulsion with this characteristic of man, the way people use each other without conscience…people devour each other.”

Island City Stage’s production of Suddenly Last Summer runs through April 17 at Island City Stage, 2304 N. Dixie Highway in Wilton Manors. Performances are at 8 p.m. Thursday through Saturday, as well as 5 p.m. Sunday. For tickets and more information, go to https://boxoffice.islandcitystage.org/Home/Shows/SUDDENLYLASTSUMMER. You can also call (954) 928-9800. 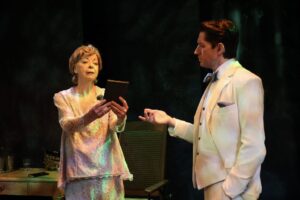 ‘Intimate Apparel’ is a fine fit at Palm Beach Dramaworks