Humor and humanity are in ‘Groundhog Day’s’ forecast 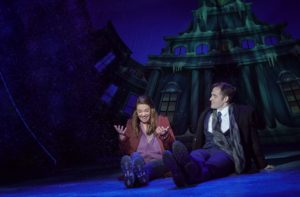 FT. LAUDERDALE — Whoever said “You never get a second chance to make a first impression” obviously had never heard of Phil Connors.

Certainly, the quote’s originator had no way to know that Connors would receive a myriad of chances to make that all-important first impression. And, after all those tries, he triumphed.

Of course, Connors isn’t a real person. Rather, he’s the main character of Groundhog Day.

You might have heard about the funny, touching and wise 1993 Bill Murray-starring romantic comedy film. The 2017 Olivier-Award winning stage musical adaptation followed. This live musical about a conceited, sarcastic weatherman stuck in a hellish time warp on Groundhog Day also received several nominations in New York, including on Broadway.

The play is onstage at the Broward Center for the Performing Arts as a vivacious Broward Center/Slowburn Theatre Company co-production through Feb. 16. It’s a strongly acted, directed and designed mounting of an award-deserving fantasy. It takes its premise, themes and characters seriously.

In lesser hands, this story might have become a farce or a simple rom-com about the difficulties in finding Mr. and Mrs. Right.

Instead, Danny Rubin, who co-wrote the award-winning screenplay and penned the musical’s book, created a surprisingly meaty work. It possesses the power to leave audience members not just laughing, but in tears and deep thought.

Since Phil Connors is stuck in a time warp, he relives the same day over and over. That means actors must repeat the same dialogue, same songs and same gestures several times throughout the show. Therefore, performers must ensure that repetitions of scenes sound and look as fresh and spontaneous as the first sequence. Fortunately, the talented and seasoned Slowburn cast succeeds. Credit director/choreographer Patrick Fitzwater with helping cast members find the right balance between humor and heart.

The movie and the faithful, yet different live adaptation will make you ponder several themes. They include resiliency, hope, despair, existential angst, outlook, redemption, second chances, the fleetingness of life, one’s purpose in life, enjoying life to its fullest, selflessness, and the importance of community.

Neither Rubin nor composer/lyricist Tim Minchin preach or tell you how to live. Rather, they might move audiences to answer at least one question: What would you do if a horrible day kept rewinding itself?

Would you embrace life and strive to improve yourself? Or would you gleefully proclaim that no consequences means you could do whatever you want? Then again, perhaps you’d sulk and feel sorry for yourself. It’s all up to you, the show’s creators seem to say.

Connors undergoes a convincing and heartening transformation from a jaded, self-loving jerk to a charming, selfless person. At the end of the show, he treats people with kindness and begins to love life in its simplicity.

The musical, which takes place in the small-town of Punxsutawney, Pa., possesses a big heart, humor that’s not cheap, creativity and characters whom you wish were real. That way, you could befriend them.

And, of course, the show contains the talented Minchin’s music and lyrics that deepen character and enhance mood. The versatile Minchin, a sort of a modern-day Orson Welles, is the same man who penned the lyrics and composed the score for the award-winning stage adaptation of Roald Dahl’s Matilda.

The actors, who possess generally strong, expressive voices, receive accompaniment from a vibrant, though not overpowering, live orchestra.

Groundhog Day shares similarities to shows such as A Christmas Carol, Our Town, It’s a Wonderful Life, and even The Music Man. Groundhog Day’s similarity to the latter lies largely in the fact that both shows celebrate small-town Americana. But the similarities with the other shows are more obvious.

In Connors, you have a man who essentially says “Bah, Humbug!” to small towns, its celebrations, offerings, and people. This is an individual living and working in a big city (Pittsburgh) employed by a major television station and who considers himself a big shot. He feels he’s above covering, year after year, a rodent forecasting the weather. This rodent’s name is Phil — Punxsutawney Phil, that is.

It’s likely no accident that the show’s creators have also named the human forecaster Phil. The possible implication: Connors thinks he’s mighty. But, in reality, he’s as low as a rodent. And, through a part of the show, he certainly acts like a rat. Punxsutawney’s residents like their Phil. At least, the famous groundhog doesn’t think he’s a gift to the world. Moreover, he gives people joy.

Sure, Murray, in the film, credibly conveys Connors’ disgust about his annual assignment. But Minchin’s music and lyrics allow a stage actor to more vividly express how Connors feels.

In particular, the song titled “Day One” contains at least a partially apathetic tone. Connors starts off the song by mentioning, in a bored tone, his surroundings. They include a “lumpy bed” and “ugly curtains.” He continues: “You couldn’t pay me to stay here one more night, (I) swear that there is no check you could write that might tempt me to stay. I have a hope of a better career than this. This is the last time I’m broadcasting here. I have been forecasting too many years to be talking to hicks about magical beavers!” Contrast clearly exists between those bitter words and the optimism that the locals express in the same song, anthem-like, about their beloved town.

But Connors is a Scrooge-like character when it comes to anything Punxsutawney. All that’s missing from Groundhog Day are ghosts, possibly disguised as groundhogs.

Meanwhile, Kelly Tighe’s ingenious scenic design evokes a world that is off kilter. Specifically, a large circular structure in the shape of a clock serves as the set’s centerpiece. All around the circle are homes. Some rest sideways while others are upside down. Behind the circular-shaped structure and homes is a backdrop of a sky with dark clouds.

The set also consists of stand-alone structures. They are simple, yet specific enough to place
us in, for instance, a diner or Connors’ room at a B&B. Also, the stand-alone set pieces help reinforce this story’s non-realism.

However, the characters sing to more fully express their very real feelings and state of mind. For instance, “There Will be Sun,” an anthem about optimism, carries a serene and optimistic tone. The actors playing townspeople nail that tone. They sing to express their confidence that sooner or later, spring will come. An equally upbeat anthem about their beloved town contrasts with the cynicism Connors expresses in “Day One.”

Meanwhile, the showstopper within the “Day One” sequence is a rousing anthem to the groundhog. It’s as catchy as and carries a similar melody to Mary Poppins’ “Supercalifragilisticexpialidocious.”

Unlike in the movie, the townspeople briefly groan and then cheer after the groundhog predicts six more weeks of winter. The cheers, absent from the movie, reinforces their positive outlook. Besides, they’re happy that the world’s most famous weather-forecasting rodent lives in their beloved town. And credit the actors who play these townsfolk with conveying a credible sense of community.

While they’re having a blast, Connors is depressed and hopeless. Unlike in the movie, he cries; he may never experience warmth or another birthday again. That is, if this cold, lonely day keeps repeating.

By this point, Connors starts showing glimpses of humanity. And in the role, the vastly talented Clay Cartland makes his character’s emotional expression sound heartbreaking. You feel for the man. And, at least for the moment, you forgive his past behavior.

Connor’s transformation into a caring, lovable man comes on gradually. Slowly, yet surely, the fresh-faced Cartland shows us glimpses of humanity after nailing Connors’ sarcastic and self-adoring personality. By the end, Cartland has credibly turned Connors into a sincerely benevolent, charming man. He is, essentially, Scrooge transformed. He’s no longer grumpy, but enthusiastically learns all about the townspeople. Further, he helps them during a spree of benevolence. Through Cartland’s performance, it’s easy to understand why the weatherman’s colleague, Rita, would finally fall in love with Connors.

Kimmi Johnson radiates joy as Rita. Through Johnson’s performance, Rita’s bubbly personality only disappears when Connors irritates her too much. We understand, through Johnson’s performance, why Phil tries so hard to win Rita over. Still, she remains elusive. Ironically, the same time warp that tortures Phil helps bring them together. It gives him multiple opportunities to learn about his colleague.

What would happen if she “had her time again,” like Connors does? With thoughtfulness and confidence, Johnson sings “If I Had My Time Again.”

Rita and Phil share touching duets and the actors playing them are convincing as a couple slowly growing close together.

Credit lighting designer Thomas Shorrock for enhancing the romantic atmosphere. At one point, the characters sing against the backdrop of a starry night sky. Shorrock’s work as a whole is equally effective in reinforcing a scene’s ambiance.

While not overtly, the specter of death hovers over this show. Not accidentally, one of the characters sells life insurance. The musical fleshes out that character, Ned Ryerson. Michael Scott Ross portrays him with endearing nerdiness and an awkward enthusiasm. Ryerson has a solo, “Night Will Come.” It reinforces to us that death awaits us all. It’s a haunting song which lets us know that in the real world, there are no time warps.

In It’s a Wonderful Life, George Bailey finally realizes that every life is valuable – including his. Similarly, Connors learns the value of every life. For example, he helps an old homeless man near death and saves another person from choking to death.

These small-town folks become his friends.

They are not people who had “better (die) and decrease the surplus population,” as Scrooge says of his fellow citizens in Dickens’ London.

Groundhog Day: The musical continues through Feb. 16 in the Amaturo Theater on the campus of The Broward Center for the Performing Arts. For ticket information and showtimes, call (954) 462-0222 or visit https://www.ticketmaster.com/groundhog-day-tickets/artist/2229864?camefrom=cfc_broward_web&brand=broward&venueId=106505 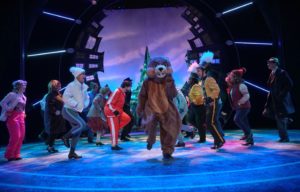 Groundhog Day: The Musical is a celebration of small town-life and the world’s most famous rodent weather forecaster.

‘Happy Days’ at Thinking Cap Theatre thanks to bravura production