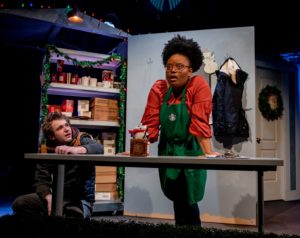 Tommy (Christian Mouisset) and Alice (Rachel Michelle Bryant) appear in a scene from the co-world premier production of Everything is Super Great.

By AARON KRAUSE BOCA RATON — There isn’t necessarily an art to dealing with difficult life situations.

Rather, different people have their own way of coping with, for instance, a void in their existence.

Some individuals might pretend everything is just fine. Admitting that something valuable or someone dear to them is missing might prove too difficult.

And that brings us to a relatable, heartfelt and humorous, if not entirely original new play, Everything Is Super Great, by Stephen Brown.

It’s a bittersweet dramedy which might remind some of a Terrence McNally play, as Brown’s new piece focuses on art and the need for human connection.

The play is experiencing its co-world premiere at Theatre Lab, the professional resident company at Florida Atlantic University dedicated to producing new work.

While world premiere productions of the play at New York-based theater companies have ended, a mostly strong Theatre Lab mounting runs through Dec. 22.

The characters are recognizable people who are hurting due to something missing from their lives.

Yet, whether it’s through art, art therapy, humor, an optimistic outlook, memories or relying on the support of friends or loved ones, these characters’ coping mechanisms are ones from which we can learn. Perhaps we’ve used them in our own lives, or know somebody who has. Certainly, if a genre called “Theater of Relatability” existed, Everything is Super Great would fall neatly within this category. Surely, at least a few people within a given audience can sympathize with the plight of a young man whose brother has been missing for months. And it’s safe to say that many mothers know what it’s like to experience communication difficulties with a child – and even feel that one of her children doesn’t like her.

Due to its subject matter, a writer penning a piece such as Everything is Super Great runs the risk of creating a depressing and off-putting play. But to his credit, Brown has found ways to leaven the somber material with humor.

And he’s created characters who are vulnerable, yet find enough strength and coping strategies to get by. Surely, these qualities endear them to us.  In fact, the play’s title suggests such a strategy. Ask one of the characters how their day is going, and they just might answer, “everything is super great.” Sure, it’s hardly true. Even so, if it gets them through another day without too much pain, a “white lie” might just heal.

Speaking of healing, can art and art therapy do the trick? That’s one of the questions Brown poses in his play, set in modern-day Texas.

Dave, who might be an art therapist, is one of the characters we meet. He has met Anne, the devoted mother of a troubled young man named Tommy, whose brother has gone missing.

Another character is Alice, Tommy’s girlfriend and co-worker.

All of the characters long for their existences to once again become whole – at least one piece is missing from each of their lives.

Sometimes, Everything is Super Great can seem like a silly play with slapsticky humor. But behind the low comedy, there’s serious intent. For instance, Dave engages Tommy in an exercise whereby the two blow up balloons. There are plenty of easy laughs as Dave struggles to blow up the balloons, which constantly pop and the two crawl after them. But as silly as it might look, the balloon exercise is a safe method for Tommy to release his anger, Dave claims.

The power of art to heal is a topic which writers have explored. But it’s always a welcome theme, considering that art can prove to be an effective way to address issues.

Brown’s play at least touches on several timely (and timeless) themes and topics. They include mother-son relationships, dealing with elderly parents stricken with mind-weakening ailments, anger management, troubled youth, the importance of optimism, the omnipresence of technology and related ethical concerns as well as the benefits of human contact.

While this meaty piece covers a variety of topics, it doesn’t feels overstuffed. Moreover, the playwright never offers easy answers. Rather, he makes us ponder what we saw. For instance, some might find the ending less than satisfactory. Specifically, there’s a sense of incompleteness which might make folks uncomfortable, since Brown doesn’t answer a key question hovering over much of the play. But, as Tommy would say, that’s OK.

Part of Brown’s parting message seems to be that comfortable resolutions and closure are often elusive. True, it’s a message we’ve heard many times, But, we can always use a reminder.

Toward the play’s end, Anne gets hurt. She asks Tommy whether she can lean on him for physical support. But clearly, she also needs to lean on him (and visa-versa) for emotional support.

However, for the first half of the play, Tommy isn’t the type of person that someone would want comforting them. He’s a wide-eyed rebel and sulks whenever his helicopter but well-meaning  mother (an emotionally honest and versatile Jeni Hacker) tries to talk to him.

As Tommy, Christian Mouisset credibly portrays all of his character’s personality traits. They include vulnerability later in the play. This trait clearly conveys to us the depths to which Tommy is hurting, due to his brother’s disappearance. But first, we witness a brooding, apathetic Tommy. You know, the teen who rolls his eyes whenever reasoning grown-ups try to talk to him. But when he’s with his friends, a wild, laughing persona overtakes him. With mussed, curly brown hair and wide eyes, the actor looks and sounds like a rebellious slacker.

Clearly, a generational gap exists between mother and son. Consider:

Anne:  Are you talking to your diary?
Tommy: Oh my God it’s not a diary—
Anne: Hey. I need/to talk –
Tommy: Stop listening outside my door.
Anne: Okay. I need to talk to you.

Mom should know better. After all, Tommy had clearly posted the following message on his door: Caution. Keep out. No trespassing.

To her credit, Hacker makes us feel that her character deserves better. True, Anne possesses a fun-loving, playful, practically hyper demeanor. She communicates with her entire body, complete with body gestures and jerks.  It’s enough to make us believe that she is Tommy’s mother, with similar traits to her son. Also, Hacker, speaking in a convincing Texas accent, lends Anne a high-strung, opinionated demeanor. But the performer also registers vulnerability as well as deep, convincing concern through her voice and  telling facial expressions. In short, Hacker makes us believe her character is a truly devoted and loving, if overly-protective mother.

And Dave, who works with Tommy on art therapy, senses Anne’s devotion. During these moments, Timothy Mark Davis endows Dave with a sympathetic and sincere demeanor toward Anne and her son. But without giving away too much, let’s just say Dave has something to hide. And, in the role, Davis’ body language and voice convince us that he’d rather keep certain information to himself. The actor imbues Dave with hyper energy and an explosive, unpredictable tendency that. At the very least, it raises eyebrows. Most impressively, Davis unleashes a torrent of words in one breath without stumbling.

The performer, recently unrecognizable as a child-like, yet volatile 18-year-old autistic young man in the play, Falling, delivers here as well.

Indeed, each of the four characters (you might even call them lost souls)  need emotional support. They include Alice, a hard-working young woman and one of Tommy’s colleagues at a Starbucks. Alice’s dementia (or Alzheimer’s)—stricken mother has gone missing. But as Tommy changes from a brooding, rebellious teen to a sympathetic, optimistic and caring young man, he encourages Alice in the best way he can. She, too, undergoes a change, from a serious, apathetic, wry and rebellious young woman to a sensitive person.

In the role, Rachel Michelle Bryant is impressively natural. She nails her comic timing, knowing just how long to pause before delivering a sarcastic remark. Further, Bryant, wearing a tall hairdo, makes her character’s transition seamless.

Generally, all four actors deliver strong performances. However, some exchanges could benefit from more spontaneity. Also, curiously, Anne is the only character who speaks with a Texas accent.

Regarding the scenery, Michael McClain’s delightfully Christmas-themed design (the play takes place around the holidays) is mostly minimalistic. There’s just enough detail to place us in a particular setting.

McClain’s set consists of six doors marked with numbers. It’s anybody’s guess as to whether the numbers 2, 4, 6 as well as 5, 3 and 1 carry significance, in that order. They appear onstage in that order. Regardless, the doors open to reveal different places, including Dave’s office, Tommy and Anne’s home as well as a Starbucks break room.

Meanwhile, the music in between scenes is appropriate, and not only because Christmas is fast approaching. For example, “I’ll be Home for Christmas” plays as we see pictures of Tommy and his brother. The song and the pictures make us wish that the brothers reunite.

The photos are part of Nick Chimienti’s projection design. It also includes scenes during which the actors appear on television. This is appropriate for the first scene, during which Tommy is video blogging. But why do the performers need to appear on a TV screen during other scenes? Generally, stage actors should perform plays live, in person, directly in front of an audience.

Theatre Lab’s production is among the first of what will hopefully be many more stagings of this relatable, if not revolutionary play, featuring real, recognizable, flesh and blood people.

Everything is Super Great runs through Sunday at Theatre Lab at FAU in Boca Raton. The campus address is 777 Glades Road. Remaining performances are 3 p.m. Wednesday, 7:30 p.m. Thursday through Saturday and 3 p.m. Sunday. For ticket prices and to purchase tickets, visit http://fau.edu/artsandletters/theatrelab/ or call (561) 297-4784. 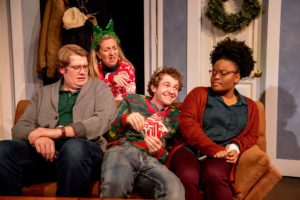 Slow Burn’s ‘A Christmas Story: The Musical’ is a holiday treat to savor