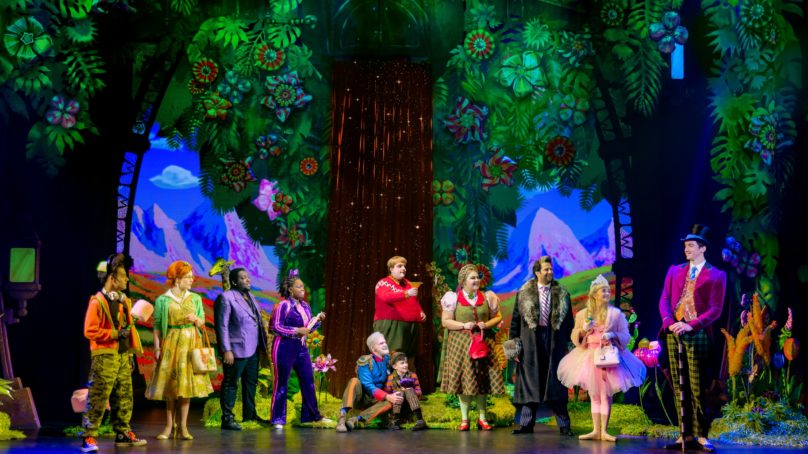 ‘Charlie and the Chocolate Factory’ sweet, not scrumptious 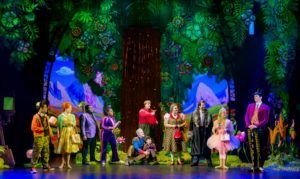 Well, the stage musical version of Charlie and the Chocolate Factory is also problematic.

To be sure, the first act features touching scenes between Charlie, Grandpa Joe, and the lad’s mother. Otherwise, Act I is essentially incessant, annoying noise. It takes the form of big, loud production numbers and unnecessary, intense visuals. Altogether, it amounts to an assault on the senses.

For starters, there’s no variety between the songs. Indeed, each of the numbers seem to compete with each other for loudest volume and most blinding visual honors.

Of course, in an uneven non-equity national touring production that recently played Miami’s Arsht Center, it doesn’t help that adult performers playing the bratty children sing so loud, fast and unclear, it’s difficult to understand a word. And their characters seem more like caricatures than real people. This is also true for the actors portraying newscasters covering the search for the five golden tickets. If you didn’t know better, you’d swear you were visiting a rowdy amusement park, not seeing a Broadway musical.

Among other issues, the show suffers due to tiresome jokes. For example, “I thought you might have kicked the bucket, Bucket!”

And how often have we heard an aging character say, “I’ll take the obituaries” when a household divvies up a newspaper?

Speaking of aging and feeling tired, the late renowned and prolific children’s author Roald Dahl writes in the source novel that Charlie’s grandparents are “so old and tired.”

But in this production, they seem eccentric, vibrant and on the younger side. It’s hard to believe that they’re “so old” and have remained bedridden for decades. So, when Grandpa Joe (an affectionate and nimble Steve McCoy) springs out of bed, and then sings and dances like a youngster, we’re not shocked.

But Grandpa Joe’s got a showstopper. When he and Charlie sing the buoyant “I’ve Got a Golden Ticket” it matches the energy of the 1971 film starring Gene Wilder. That’s because McCoy and child actor Ryan Umbarila, who played Charlie at the reviewed performance, sing and move with sunny energy during this musical number.

The stage musical, with a book by David Greig as well as music and lyrics by Marc Shaiman and Scott Wittman, originated on London’s West End. The show underwent changes for the Broadway production. It opened in April of 2017 and ran for almost nine months.

Still, even with the changes, the show isn’t as satisfying as a Wonka chocolate bar. You can partly blame the amusement park-like aura. And when  Wonka speaks to Charlie and uses the word “disconsolate,” eyebrows should rise. Does he really expect a young boy to know what that word means?

Garcia imbues the candyman with cheery enthusiasm and charm. He smiles as brightly as the South Florida sun during summer. Also, Garcia is equally adept at conveying sarcasm and dark humor. But, what’s missing is a slyly mysterious quality that would add depth.

Garcia has a pleasant singing voice. He uses it to convey bliss during the bright, familiar song, “Pure Imagination” and the catchy “The Candy Man.”

Fans of the 1971 film should be happy.  That’s because the musical’s creators have included the iconic “Oompa Loompa Song,” complete with commentary on the naughty children’s bad habits.

By the way, the oompa loompas appear as spectacular puppets. But even though the illusion isn’t hidden, we can use our imagination to believe that they’re actual small people. This is a story about imagination, after all.  Which begs the question: Why include a projection clip of the Oompa Loompas in their native land? We should be able to imagine them in “Loompa Land” as Wonka describes his encounter with them there.

While these little and adorable folks are hardly new to us, nutcrackers are not. I’m talking about Wonka’s wonderous squirrels with a knack for cracking open nuts. They do so to see which ones are good and which are bad. In the show, they appear as costumed rodents. And even though we’re a little late for a nutcracker dance, the squirrels sway with the demanding Veruca Salt (a self-adoring, if not whiny Angela Palladini).

The dance, while not essential to the story, occurs during the second act. It’s an improvement over the first, thanks to enthralling visuals and a blending of the familiar with welcome, timely additions. For instance, the song “Vidiots” cleverly and wryly comments on some of the bad habits today’s youth exhibit. The words amount to exaggeration and stinging satire.

Dahl, with his dark humor and a bit of nastiness, uses similar techniques when he describes the ordeals of the brats who misbehave in Wonka’s factory. Clearly, though, he sides with the children. Often, Dahl’s stories involve evil adults who badly mistreat children. Are the parents in this story evil? The subtext is that they are: they spoil their children rotten.

Certainly, Charlie is different. And as Umbarila portrays him, the boy is a small, wide-eyed, imaginative child with almost unbridled enthusiasm and a sweet disposition. To his credit, Umbarila avoids cuteness overload. At different performances, you will see one of two boys as Charlie: Either Umbarila or Brody Bett.

A convincing bond exists between Umbarila’s Charlie, his grandfather and his mother (Caitlin Lester-Sams, playing mom as loving but firm and a woman who takes the family’s poverty in stride). “If Your Father Were Here”  is akin to a lullaby. Lester-Sams approaches it with a mother’s affection.

Slog through the first act, because the second is redeeming.

Overall, despite the show’s problems, there’s enough humor, familiarity and appealing additions to make this musical solid although unspectacular.

The non-equity national touring production of the stage musical adaptation of Roald Dahl’s Charlie and Chocolate Factory might play at the city in which you live…or nearby. For venue information, as well as ticket prices and times, visit https://www.charlieontour.com/ 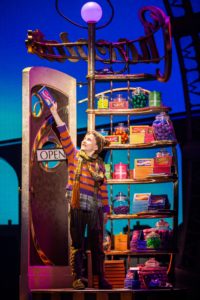 Charlie Bucket (Ryan Umbarila) exults as the finder of one of five golden tickets.