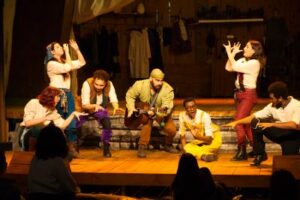 Members of a fictional theatrical troupe prepare to act in a production of Shrek The Musical in Area Stage Company’s revival of its hit 2018 production.

Two southeast Florida theater companies are demonstrating how quality, live, in-person theater can safely happen, even amid a pandemic. Specifically, in Miami Beach, the professional, nonprofit Miami New Drama is showcasing its resourcefulness by transforming several empty storefronts into stages for its imaginative, credible production of Seven Deadly Sins. Inside each storefront, performers act out short plays centered around those sins. Outside, masked, socially-distanced audience members watch those pieces play out. Seven Deadly Sins, which Miami New Drama has extended twice, runs through Jan. 31.

Across Biscayne Bay, in South Miami, the professional, nonprofit, and visionary Area Stage Company is reviving its critically-acclaimed 2018 production of Shrek The Musical. The equally-imaginative, stripped down revival is taking place at Area Stage Company’s new home, The Shops at Sunset Place, through Feb. 6.

As is the case in Miami Beach, masked, socially-distanced audiences are watching Shrek: The Musical. They’re doing so in an outdoor, relaxed setting. In fact, it might call to mind a “Shakespeare in the Park” series or a show at a Renaissance Faire. Indeed, during the reviewed performance, some audience members sat on blankets in the grass. And others sat on chairs. But, as is the case at Miami New Drama, the Area Stage Company audiences do not hold physical programs. Rather, due to the pandemic, patrons have to scan digital programs.

Of course, theater companies outside South Florida don’t have the luxury of producing theater outdoors during winter. But come spring and summer, theater company leaders could learn a few things from Miami New Drama and Area Stage Company.

Seven Deadly Sins has been in production for a few weeks. You can find my review at https://theatricalmusings.com/reviews-by-theater/safe-live-theater-returns-to-miami-beach-with-seven-deadly-sins/. Meanwhile, Area Stage Company just opened its laudable revival of Shrek: The Musical.

About three-and-a-half years ago, I noted that the 2018 production, under theater artist Giancarlo Rodaz’ creative direction, was magical even while the theater magic was simple and visible. There were no elaborate design elements than, and that is also true with this revival. Rodaz proved then, as he does now, that a production doesn’t need a huge budget and expensive, invisible special effects to captivate.

This time around, the cast features different performers. But just as we did in 2018, we buy into the world onstage — thanks, in part, to energetic, convincing, and charming performances.

A cast of seven performers plays multiple characters. By contrast, the Broadway version of the show, which Fort Lauderdale’s Slow Burn Theatre staged in 2019, calls for more than two dozen actors. The band is also smaller in Rodaz’ production. Specifically, the musicians are Richard Kaydas (piano/conductor), Ryan Hecker (drums), and Sandy Poltarack (guitar). To their credit, the musicians spiritedly accompany the actors without drowning them out. Also, the sounds the orchestra produces reinforce a magical aura while adding contrast and enhancing mood.

In Rodaz’ approach, the seven actors are members of a thespian troupe performing Shrek the Musical at a kind of modern-day Renaissance faire. Rodaz doesn’t develop this approach throughout the show. However, it’s clear at the beginning that the performers are a close-knit troupe. Once the show starts, Nicholas Nickleby style, at least one actor narrates the action of the musical. Its creators based the stage show on the 2001 animated film. In the musical adaptation, and in the movie, the evil Lord Farquaad banishes a group of fairy tale characters from their land. Then, they encroach upon Shrek’s swamp, angering the ogre. But if he can rescue Princess Fiona, whom a dragon keeps imprisoned, all might live happily ever after.

With little more than a green ball on his nose, actor Frank Montoto transforms into the title character. The actor convincingly conveys traits such as irritability and defiance. He is, unapologetically, a smelly, irritable ogre who prefers to be by himself. And he’s unafraid to stand nose to nose with anyone who bothers him. But to the actor’s credit, Montoto’s Shrek isn’t unlikable. We need to care about him. That way, we’re willing to follow his story and stay with him through his transformation into a more sensitive, kind person. And Montoto proves just as adept at presenting the character’s softer side as he does Shrek’s gruffier demeanor.

Accompanying the ogre on a quest to rescue Princess Fiona is a talking donkey. Rather than wearing an animal costume from head to foot, which might hide some of the creature’s humanity, actor Aaron Hagos’ costume merely suggests that he’s playing a donkey.  At times, Hagos stands on two feet. And during other moments, he’s on all fours. This could symbolize dual beast-human qualities. A wide-eyed, joyful Hagos in perpetual motion, speaking in a high-pitched voice and gesturing often, makes the donkey a loveable, fast-talking creature. And credit Hagos with speaking quickly without appearing to rush his lines.

Meanwhile, Katie Duerr plays Princess Fiona with an independent, assertive demeanor. In addition, she instills in Fiona charisma, charm and vulnerability. But whatever trait she’s exhibiting, Duerr, also the production’s music director, ensures that Fiona is always easy to root for. And boy can Duerr hold a note while singing.

While we don’t necessarily pull for the villain, Lord Farquaad, we don’t fear or dread him either, as we might Bill Sykes in Oliver! Rather, Farquaad’s evil in a comical sort of way, a la Captain Hook. So, kudos to John Mazuelos, who injects Farquaad with flamboyance and a pompous, self-loving air.

As any Shrek fan knows, Farquaad is short, or “vertically challenged.” However, as part of Rodaz’ minimalist approach, the director doesn’t try to hide the fact that Mazuelos moves while on his knees. As a matter of fact, we even see knee pads. In fact, the pads aren’t the only visible props. For instance, we see a performer carrying fake birds on strings. In addition, a puppet’s human handler is fully visible to us, as is the human performer moving the gingerbread man.

Rodaz uses a screen on which characters and objects appear as shadows. This serves a couple purposes. Namely, when a character is describing a scene from the past, the action plays out on the screen. In addition, it lets us witness some neat visual effects, enhancing the magical aspect of the show.

Speaking of visuals, Rodaz designed the costumes, lighting, and set. The outdoor stage offers plenty of room for the performers to freely move about. Wooden structures on either side of the stage resemble castles. But a sign that reminds others to beware of the ogre is in a curious position. It’s not only hard for the audience to notice it, but the characters as well.

As for the lighting, the color red reinforces a dramatic or dangerous scene, while green lighting highlights the ogre. At times, the lighting rapidly blinks on and off, enhancing a scene’s intensity.

For the most part, Rodaz’ costumes are character appropriate. For example, Farquaad wears black, befitting a villain.

As a director, Rodaz places equal emphasis on comic moments and those more touching. The pacing is fluid but not too fast, allowing us to follow the action.

Cast members do not wear masks; it would be too hard to understand them if they did. And at times, the performers stand close to each other while speaking. However, according to Rodaz, the performers have been undergoing COVID-19 testing twice a week since rehearsal, and will continue to do so.

Shrek The Musical‘s songs are not memorable. However, the show’s themes are relevant to today. For instance, hearing about exiled characters might call to mind today’s refugee crisis. And Shrek reminds us not to judge people until we get to know them. It’s a particularly relevant message today, with hate on the rise and divisiveness rampant.

The main characters refer to unpleasant smells during the show. But if you attend the production, take a whiff. You may notice, like I did, what I’ll call a “live theater smell.”

Oh, how welcome such a scent is these days.

Shrek The Musical runs through Feb. 6 at The Shops at Sunset Place, 5701 Sunset Drive in South Miami. Performances are at 7:30 p.m. Fridays through Sundays. For more information, including ticket prices, call (305) 666-2078 or visit https://www.areastage.org.

Take a trip around the world and experience new plays