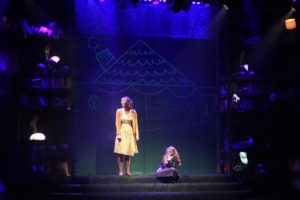 Katie Duerr as Miss Honey and Alejandra Bess as Matilda are deep in thought in Area Stage’s commendable production of Matilda.

CORAL GABLES — The smell of rebellion from “revolting” children has rarely been sweeter.

The aroma emanates these days from the Riviera Theater in Coral Gables. That is where the resident Area Stage Company is mounting a mostly commendable production of Matilda The Musical through Oct. 6.

Certainly, much of the credit for this production’s successes goes to young visionary director Giancarlo Rodaz. Among other things, he has helped instill inspiring spunk into the child actors who play the “Revolting Children” of Matilda the Musical.

Then again, “revolting,” as in disgusting, hardly seems an apt adjective for the children of Matilda — or any good-natured, well-meaning youngsters.

Surely, this is true regardless of the time period. Yet, it seems particularly the case these days. It’s safe to say that many have become extra endeared to children in recent months. No doubt, news reports of school shootings as well as migrant children separated from their parents and locked in cages have broken many hearts.  In all seriousness, perhaps these cages are as suffocating as Miss Trunchbull’s “Chokey.”

For anyone familiar with Roald Dahl’s twisted, darkly funny yet well-meaning and beloved tale, the “chokey” is an extremely narrow, claustrophobic cage with sharp objects protruding from within. “The Trunchbull” locks her charges in these horrifying cages if she believes they have misbehaved. And, at least to her demented mind, which of them hasn’t at any given moment? To her, they’re all criminals, maggots and vile creatures.

As a matter of fact, it’s hard not to compare Miss Trunchbull these days to governmental officials who’ve played a part at allegedly mistreating migrant children.

So, it’s understandable that many might harbor an especially soft spot in their hearts for children forced to suffer. And at the same time, folks’ blood might boil even more today at the sight, sound and perhaps even stench of the Miss Trunchbulls of the world.

For all his twisted, exaggerated and dark humor, Dahl isn’t that far off base when we consider some of the vile persons in the world today.

And under Rodaz’ deft direction, we never doubt which characters to root for and those we should detest.

Certainly, Corey Vega, in the traditionally cross-dressing role, is a frightening, androgynous Trunchbull.

In Vega’s hands, this headmaster’s anger and poison can simmer like a subtle, sneaky, slow-moving, slithering snake. During other scenes, Vega lends “The Trunchbull” a thundering, roof-raising menace that might make her charges shake. He speaks in either a quiet hiss or a sharp, penetrating voice and leans forward, like a lioness ready to pounce.

Come to think of it, one of the curiosities of Dahl’s novel is why this individual became a school headmistress in the first place. Does she enjoy tormenting children so much that she especially entered the field to do just that? Dahl never directly answers the question. Regardless, Vega’s performance, and this is testament to his strong portrayal, makes us wonder why even more.

Unquestionably, Miss Trunchbull stands for everything educators would rally against. For instance, she believes in “educating” through fear, intimidation and bullying.

Obviously, the headmistress is a bully, and even her name turns one off.

By contrast, Matilda’s teacher, Miss Honey, possesses traits fitting for her name. She’s sweet without being overly sentimental and deeply cares about her pupils. Moreover, she believes the best way to educate children is through enthusiastically imparting knowledge and earnestly caring about them. But this teacher harbors another trait that the musical, even better than Dahl’s book. Specifically, that trait is her lack of self-esteem, at least in the beginning. As the story progresses, Miss Honey gains more pluck.

In the role, Katie Duerr early on conveys the teacher’s insecurities through insecure body language.

The performer uses this to great effect while singing “Pathetic.”

headmistress about Matilda. Through Duerr’s impressive rendition of the song, we keenly sense the teacher’s inner conflict as she berates herself for hesitate to knock on the door. Clearly, Miss Honey’s demeanor changes to more confident when she sings about “this little girl,” meaning Matilda.

Kudos to Bess for imbuing Matilda with fierce determination and concentration. This is especially true during a later scene when Matilda is trying to put her magical powers to work. With her wide eyes and serious expression, Bess’ Matilda looks like an indomitable girl with, spirit, spunk, a strong will and bravery. It’s clear she’s not going to let her awkwardness or the fact that she’s “different.” In short, she’s a strong female character who realizes that being small doesn’t mean you lack might.

Bess also demonstrates some impressive versatility for a performer so young. She also makes Matilda caring and sweet without acting too cute. Further, for a small girl, Bess has a clear, strong voice. This becomes clear through Matilda’s solos, “Naughty” and “Quiet.” The latter is a bit of tongue twister, like some other songs, yet Bess doesn’t stumble.

However, Bess needs to work on enunciating more and speaking more slowly. For instance, when Matilda relates a tale to the town librarian (an enthused Abigail Baldwin), we can barely understand the particulars. Of course, it is important that we understand the story about the acrobat and the escapologist. After all, this tale plays a major role in Matilda, as it demonstrates the girl’s almost unheard of abilities. To say much more would be to ruin the story for the few unfamiliar with Dahl’s tale.

But it’s not ruining anything to say that since the musical’s world premiere by the Royal Shakespeare Company in December 2010, it has won 47 awards.

Fortunately, the show retains Dahl’s dark, twisted humor while deepening the characterizations through song. And the lyrics by Tim Minchin are mostly clever, humorous and insightful. However, some are unnecessarily repetitive and pedestrian. Meanwhile, the music, also by Minchin, is often spirited, with hard-charging melodies mirroring the rebellious spirit of the children. At other times, the songs are softer and more contemplative.

Equally important, book writer Dennis Kelly has written a show that, like the book, will appeal to different ages. Certainly, children will find pranks humorous. Also, younger audiences should be able to relate to the children, played here with energy and mettle. However, the child actors are sometimes difficult to understand during group numbers.

Overall, cast members possess expressive, clear and strong voices. A vibrant, live orchestra accompanies them without drowning them out.

One aspect of Matilda with which I’ve always had an issue is the placement of the song “When I Grow Up.” There is no transition into this number, during which the children sing about their hopes for the future. It comes suddenly and immediately after one of the children tells us about a prank she plans to play against Miss Trunchbull. Sure, the song carries a sunny, upbeat and hopeful melody. In addition, the children sing this “feel-good” song brightly. But the show’s creators could have done a much better job in finding a transition into this song.

While children will find much to celebrate in Matilda, adults should appreciate themes such as standing up for what you believe is right and valuing others. In addition, the importance of reading is a major theme that always seems to retain its timeliness. After all, many youngsters seem constantly glued to their electronic devices. But if Matilda (the character) were living today, she’d be constantly reading – but hardly children’s books.

In a wise directorial choice, Rodaz keeps Matilda’s head buried in a book even before the show starts. As we walk in, one of the first things we see is the girl with her back to us, reading.

The director, who is also the set designer, has constructed a world onstage that symbolically communicates the show’s themes and ideas. For instance, cases of books, block letters, dolls, stuffed animals and Matilda’s bed are built into the set. It also includes playground equipment such as slides.

Through set construction, Rodaz seems to be saying that learning and play are equally important – and that the two are not necessarily mutually exclusive.

From a staging standpoint, the director keeps the proceedings interesting by moving the actors around throughout the entire set, as well as offstage. Indeed, you never know from where an actor will enter or exit. While onstage, Rodaz keeps the actors close together, which can symbolize solidarity.

As though directing and set design were not enough, this versatile theater artist also designed the lighting. It provides focus and deepens mood through appropriate use of color. In addition, the lighting, while perhaps overdone a bit, produces some neat and seemingly real effects.

This young theater artist, known for his creative yet simple approaches to shows, succeeds again in Matilda. For instance, rather than creating multiple sets, he indicates on a projection screen places such as the Trunchbull’s office.

Along with those “Revolting Children,” they help produce that sweet, irresistible scent emanating from the stage. 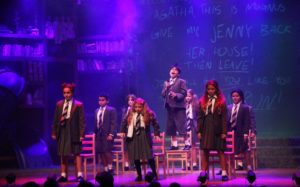 Family-oriented ‘When She Had Wings’ soars at Theatre Lab