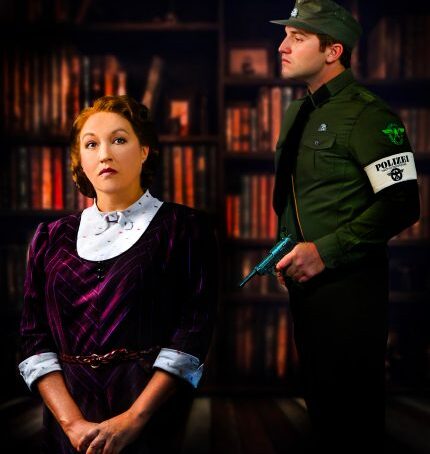 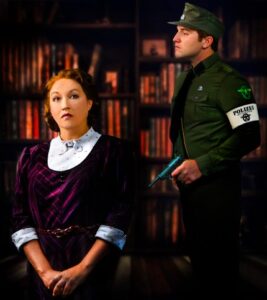 Whenever Palm Beach Dramaworks (PBD) Producing Artistic Director William Hayes read or watched Anne Frank’s story play out on stage or screen, he wondered about the people who hid Frank and seven others. Specifically, who were these good Samaritans? And what did they endure to keep Frank, her family, and others safe from the Nazis during World War II for a little more than two years?

In fact, in a little less than two weeks, the answers will come in the form of The People Downstairs.

Prolific and versatile South Florida playwright Michael McKeever wrote the play. It will experience its world premiere production at PBD. The production will open on Dec. 3 and run through Dec. 19 at the professional, nonprofit theater company in West Palm Beach

“I just felt it important now more than ever to remind others (that) it takes courage to stand up for what’s right,” Hayes said. “I just think it’s an important story to tell during our current times of racial tensions and the turbulence” in the world.

Seed planted at a dinner meeting

Actually, the road to opening night began one evening about two years ago, when Hayes met McKeever for dinner. Would the playwright want to write about Anne Frank from the perspective of those who hid her and her family?, Hayes asked.

“He went so nuts about it that I knew he was the guy to write it,” said the PBD leader. He has a roughly 20-year working relationship with McKeever.

I immediately said ‘Yes, yes, yes; I thought it was a great idea,” he said.

For one thing, McKeever, a playwright since 1996, said he is a huge history buff. In addition, the writer said he is always looking for stories that feature “great conflict” and that nobody has told.

Hayes said that to his knowledge, nobody has told Anne Frank’s story from the angle that he proposed to McKeever. And so, Hayes commissioned McKeever to write The People Downstairs.

McKeever said he conducts several months of research before writing a play. That is especially true for a piece based on a true story. In this case, he re-read The Diary of Anne Frank, and read a couple of biographies on Frank and her family. However, most importantly, he read the 1987 book Anne Frank Remembered, by Miep Gies. That author was among those who kept Frank’s family safe, fed, and informed as the Nazis rounded up European Jews. Gies, who is one of the characters in The People Downstairs, died in 2010, at age 100.

McKeever said he planned for part of his research to involve visiting the Anne Frank House in Amsterdam. However, the pandemic got in the way. Still, he will travel there eventually, he said.

Altogether, McKeever said it took him three or four months to write the first draft. In this case, in order to tell the best story, a playwright does not need to get all of the facts correct. Rather, McKeever, whose play’s basis is real events, considered what he would need to do to tell the most entertaining story.

After he completed the first draft, the piece underwent several workshops. During them, edits took place. In January 2019, a cast of performers participated in a live, in-person reading of the first draft in front of a full house. PBD’s auditorium holds almost 220 people, Hayes said. Afterwards, audience members provided feedback.

Comments “were extremely positive,” McKeever said. “It was a very enthusiastic, positive response.” In essence, audience members said that PBD needed to produce The People Downstairs, the playwright added. Also, PBD conducted a couple more workshops during the pandemic.

Hayes said that usually with a new play, he will schedule four-and-a-half weeks of rehearsal. However,  The People Downstairs was in “better shape” than some other new plays with which he has worked. Still, the new play underwent a number of edits and re-writes. And McKeever said, as a playwright, he is always trying to improve pieces that he has written.

Today, the characters are more layered, the relationships are deeper, and the stakes are higher, Hayes said.

The People Downstairs is not a “history lesson.” Ultimately, it serves as a reminder to do the right thing, just as the hiders did, Hayes said.

Hayes praised McKeever as a playwright. Specifically, he creates “interesting characters,” with depth to them, and is “simply a good storyteller.” In addition, McKeever “knows how to grab an audience” and keep their attention.

McKeever said he tends to create characters who are interesting and human. And, the well-read writer said the fact that he writes about many subjects keeps him interested in playwrighting. Why? Because the subjects keep changing, he said.

It is hard to group McKeever’s plays by theme; his plays cover many different subjects and themes. Indeed, McKeever has written everything from a comedy/satire that features a dead male prostitute on the night of the Golden Globes Awards ceremony to a drama about how a family deals with the Third Reich engulfing Germany.

“With wit, insight, and a healthy does of his quirky sense of humor, Michael McKeever continues to entertain theater audiences throughout America, Europe, and Russia,” reads his biography on his website. On it, the playwright groups his works into three categories – comedies, dramas, and shorts. While he “tends to have a bit more fun” with comedies, McKeever said comedy is “very technical, and  very specific. Every beat is all about timing and rhythm.”

McKeever, who has been hooked on live theater every since attending his first Broadway show in the 1980s (42nd Street), said he loves the art form’s glamor and immediacy.

“It’s so completely human, those four characters are so beautifully realized and honest,” he said, adding that the play “absolutely influenced” his writing style. The play is a study in how humans lose themselves in the fog of drugs, alcohol, sex, disease, and other escapes from reality.

Many consider Long Day’s Journey Into Night to be O’Neill’s magnum opus — and one of the finest American plays of the 20th century.

McKeever said he is proud of many of his plays. However, McKeever singled out Clark Gable Slept Here. It is a play featuring a dead male prostitute on the night of the Golden Globes.

Also, McKeever said he is “very satisfied” with how The People Downstairs has turned out. For instance, the writer said he believes he has created flesh and blood human beings, with “very human traits and flaws.” They are not just historical names, McKeever said.

“I’m very proud of it, I think Bill has assembled an amazing cast, an amazing group of designers.” The more they rehearse, the more excited McKeever said he gets to witness how the finished product plays in front of a live, in-person audience.

The play is “ultimately about the human instinct to do the right thing against all odds, no matter what the cost,” McKeever said.

In addition, McKeever said he wants audiences not to simply enjoy the play, but to learn. For instance, many people think the Frank family and another one hid in an attic above a house. In reality, they hid in a back annex of a warehouse where Anne Frank’s father worked.

“There was an entire warehouse full of workers just below their feet, so they had to be very, very quiet,” McKeever said. “There were enormous challenges for the hiders and the helpers.”

The People Downstairs will run from Dec. 3 through Dec. 19 at Palm Beach Dramaworks, 201 Clematis St. in West Palm Beach. To buy tickets, for dates as well as showtimes, and to read about COVID-19 safety protocols,  go to https://tickets.palmbeachdramaworks.org/TheatreManager/1/online?event=404.

Theatre Lab’s ‘To Fall in Love’ is relatable, heartfelt