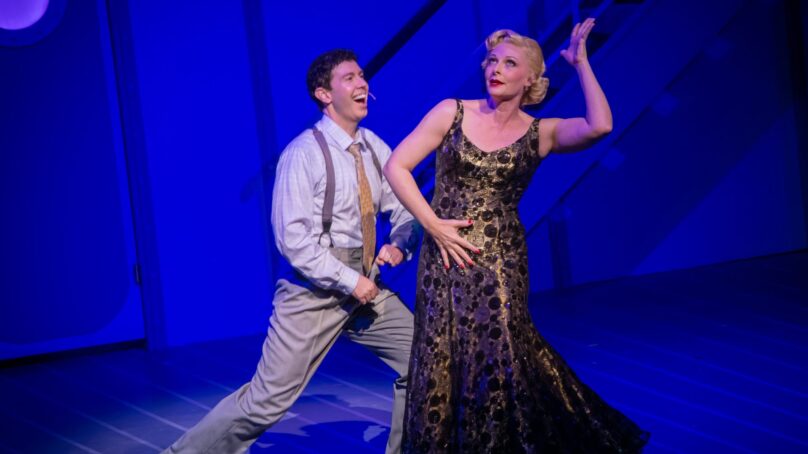 ‘Anything Goes’ at The Wick is a much-needed respite

Billy Crocker (Jeremy Benton) and Reno Sweeney (Aaron Bower) live it up in The Wick Theatre’s production of Anything Goes.

Try to look away from her. Just try.

She’ll captivate you, my pretties! And her castmates will too!

True, Bower lights up the entire auditorium in a performance blessed with nuance, spontaneity, and star quality. However, remarkably, the performer never upstages her fellow cast members. They also prove to be triple threats in the Wick’s must-experience production of Anything Goes, a 1930’s musical comedy classic. It is, at turns, wacky, witty, farcical, sexy, and sophisticated without talking down to audiences.

The producion runs through Feb. 12 in Boca Raton.

Clearly, everybody from the cast to the backstage crew has executed to near perfection director Norbert Joerder’s vision. Obviously, they are all in sync from the opening curtain to the final bows of this playful, vivacious production.

This musical is just the kind of escapist entertainment that we need for a couple of hours to get away from dread-inducing headlines of the day.

While Anything Goes is mostly an escapist piece, the show manages to satirize, for instance, celebrity gangster worship. And lyrics such as “the world has gone mad today,” certainly ring true today. Indeed, we are living during a dark, unpredictable time when, seemingly, anything goes and nothing ceases to surprise us.

If you are not familiar with Anything Goes, it takes place aboard an ocean liner. Specifically, the S.S. American is bound from New York to England in the 1930’s.

Young Wall Street banker Billy Crocker is one of many passengers aboard the ship. He is after his long-lost love, debutante, and fellow passenger Hope Harcourt. The problem is, Harcourt is engaged to wealthy Englishman Lord Evelyn Oakleigh.

Sweeney, a couple of famous gangsters, and others comically fit into the complex plot. However, thanks to director Joerder’s deft pacing, the action is easy to follow.

In fact, there are nearly as many mistaken identities and disguises in Anything Goes as in a Shakespearean comedy. And the musically ends happily like the Bard’s comedies.

Mentioning Porter and Shakespeare in the same sentence is hardly a stretch. After all, Porter (1891-1964) was the composer and lyricist of 1948’s Kiss Me Kate. Speaking of that show, it is a musical treatment of the Bard’s The Taming of the Shrew. In that gem, Porter showed an ability to marry his lyric style with Shakespeare’s speech.

Anything Goes is almost 90-years-old, having premiered on Broadway on Nov. 21, 1934. Still, this musical theater classic retains its freshness, due largely to composer/lyricist Cole Porter’s genius. His songs contain melodies that stick like glue in your head long after you have left the theater. And Porter’s witty, clever lyrics continue to amaze audiences and critics.

Porter’s signature style, known as a “Cole Porter Song” features lyrics that are urbane or witty. He paired them with melodies that were, at times, sinuous and brooding. However, Porter’s melodies could also be simple and bouncy.

The actors possess strong and expressive singing voices. Vibrant-sounding recorded music accompanies them. While it does not sound as rich as accompaniment from a live orchestra, it suffices.

Several versions of this musical exist. The Wick has opted to produce the 2022 revision. Its basis is the 1987 Broadway revival, which Lincoln Center Theater originally produced. This version features twice as much dance music as the 1962 production. Also, two cartoon-like Chinese characters are now ethnically-neutral small-time crooks.

Korenblum and Joerder use the playing space wisely. For instance, for big, rousing dance numbers, they use the entire stage. And for smaller, more contemplative songs, the director and choreographer use smaller sets within the larger playing space.

Also, behind the scenes, Ardean Landhuis’s scenic design looks impressively real – we really believe that the characters are aboard a sturdy, multiple level ship. Stand-alone set pieces represent different locales, such as one of the passengers’ elegant rooms. The set pieces seamlessly enter and exit the stage.

Mostly, the performers disappear into their characters.

In addition to Bower’s sly, sexy, and charismatic Sweeney, cast standouts are many. They include: Troy Stanley as a sometimes uptight but fun- loving Elisha Whitney, Alexandra Van Hasselt as a properly mannered Hope Harcourt, Paul Louis as a friendly Lord Evelyn Oakleigh, Britte Steele as a stiff Evangeline Harcourt, Jeremy Benton as a charming Billy Crocker, Leah Sessa as a scatterbrained Erma La Tour, and Barry Pearl as a tough talking but likable Moonface Martin.

Also delivering quality performances are Matthew Buffalo as a determined Ship’s Captain, and Zachary Kopelman, who imbues the Ship’s Purser with an air of authority.

This year, for at least the second year in a row, a strong actress has delivered a Carbonell Award-deserving production. This time, it is the sensational Bower as Sweeney.

The Wick Theatre’s production of Anything Goes continues through Feb. 12 at the theater, 7901 N. Federal Highway in Boca Raton. For showtimes and tickets, go to https://thewicktheatre.thundertix.com/events/197579. You can also call (561) 995-2333. 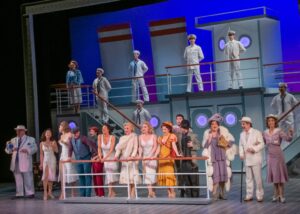 Here is the cast of The Wick Theatre’s production of Anything Goes.