Musical
Off Broadway
Reviews By Theater 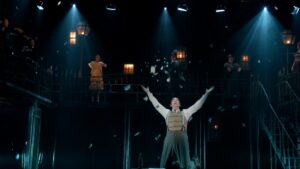 Photo courtesy of the Pat Moylan production of Angela’s Ashes: The Musical.

Frank (Eoin Cannon) exults during a scene toward the end of The Pat Moylan production of Angela’s Ashes: The Musical.

A story that is ripe with rich, raw, and real emotion is often a tale worth musicalizing. Certainly, Frank McCourt’s award-winning memoir, Angela’s Ashes, is a work that fits into that category. Fortunately, composer/lyricist Adam Howell, and librettist Paul Hurt saw the musical possibilities in McCourt’s self-described “epic of woe,” a best-seller and highly-touted work which won the Pulitzer Prize following its release in 1996.

Howell and Hurt’s efforts have given us Angela’s Ashes: The Musical, which takes place between the 1930s and 1950s in New York and Ireland. It is a show that caresses the heart and soul with songs that deepen emotion. The musical is faithful to the book, with some of McCourt’s exact words. However, the musical is not a replica of its source material.

McCourt’s compelling memoir is memorable due to the author’s lyrical writing, his warm narration, amazingly detailed recollection of his poverty-stricken childhood in Ireland, and the manner in which he balances pathos and humor. By contrast, the bleak 1999 film adaptation emphasizes the story’s darkness while offering little of the book’s humor. But audiences will leave the musical having experienced an emotional journey that serves up, for instance, humor, sadness, disgust, and joy.

The tale that McCourt (1930-2009) recounts in Angela’s Ashes is, unfortunately, a familiar one to many. McCourt’s parents, Angela and Malachy, emigrated to America in search of a better life. After the titular character became pregnant with Frank, the parents married, and had a daughter, Margaret.

Unfortunately, Margaret dies as a baby, Angela becomes depressed, and the parents find little opportunity in New York. Then, this Irish Catholic family decides to move back to their native Ireland, specifically Limerick, where family members live. However, the relations can only offer so much support, and opportunities are scarce. Of course, it doesn’t help that Malachy constantly spends what little money he earns from odd jobs on liquor. In addition, family members, as well as priests and others, are often less than pleasant to the McCourts. They don’t like, for instance, that Malachy is a drunk from Northern Ireland, and suspect he has Protestant roots.

The family lives amid poverty, conflict, hostility, disease, and death. The onset of World War II certainly adds to the tension. But Angela possesses a strong will to live. To be sure, she, like everyone, has her breaking point. At times, she loses it, and you can probably understand why. However, she’s charming, loving, funny, and determined to survive with her family as best as she can.

Neither McCourt nor the musical’s creators portray the McCourts as saints. Rather, they come across as flesh-and-blood, imperfect humans.

Angela is a complex character, as is Malachy. At some points during the musical, you might feel anger toward him, or even hate him. You’re likely to feel this way, for instance, after he returns on Christmas from England, where he supposedly found work. In reality, he probably spent his money on alcohol and brought almost nothing back for his family. Also, when an obviously drunk Malachy returns home at night, singing discordantly, you want to at least tell him to hush. But there are also moments when you feel for the man, such as when he spends quality time with his children. Also, you might sympathize with him when, choking up, he tells God that he’s sincerely sorry that he’s brought trouble upon his family. You only wish he’d summon the nerve to apologize to family members.

Other less-than-likable characters also possess admirable qualities. For instance, Angela’s sister, Aggie, is rude. You get the sense that she hates her nieces and nephews. Yet, she tries her best to help her family through hard times. Grandma can be curt, but she also means well and helps her relatives. There’s also the McCourt’s seemingly unfeeling landlord, Brigid Finucane. She unmercifully threatens her tenants if they cannot pay rent, hard times or not. But she also ends up offering Frank a job, and he uses the money to help pay for his return to America.

Angela’s Ashes: The Musical is markedly faithful to McCourt’s memoir. This stage adaptation retains the device of a narrator — an adult Frank looking back at his childhood. In fact, the musical’s tie to the memoir is so strong that at the beginning, Frank picks up the book, and is seemingly about to read it. Then the book’s characters appear in the flesh. They audibly remind him of moments from his past. And with that, we flashback to his unhappy youth.

Curiously, the musical number that beckons Frank to his past, the title song, “Angela’s Ashes,” is upbeat and happy. If a musical’s opening number is supposed to set the tone for what is to come, this opening song only partly accomplishes that by preparing us for the happy ending. The song, however, doesn’t ready us for scenes of misery. Also curiously, “Angela’s Ashes are calling,” are the opening lyrics. What does that mean in this context?

In the story, which is rich with symbolism, the ashes might refer to those from Angela’s cigarettes. The ashes might symbolize Angela’s crumbling hopes, or losses, such as the death of several of the McCourt’s children. Or, the ashes could refer to Angela’s literal future ashes, as we learn that, eventually, she will be cremated and her ashes scattered along the River Shannon.

Speaking of the river, the musical’s creators humanize it in a hauntingly prayerful song titled “Sing River Shannon.”

The musical also includes numbers whose lyrics convey unflinching honesty. One reminds us to be good to our mothers – some day she’ll be gone and you don’t get another one. And in another song, Angela, without sparing words, sings to her husband, “I don’t know you anymore.”

The book of this musical, which doesn’t include a single wasted moment, includes powerful exchanges, such as when Malachy tells his wife that she could go to hell. “I’m already there,” she responds, obviously referring to the family’s hellish existence.

Then there’s the moment when Frank tells us that, like in the Trinity, his dad is comprised of multiple people: The man in the morning who seeks employment, and the one at night who comes home drunk. “The one in the morning is my real father,” Frank says.

The book of this musical is also witty, and you do not have to be Irish or Catholic to appreciate the humor.

The cast is uniformly strong. For starters, the performers’ Irish accents never get in the way of our ability to understand them.

Jacinta Whyte lends Angela an inner strength that allows her to forge ahead despite the family’s poverty and her husband’s addiction to the bottle. Whyte’s Angela never resorts to self-pity, and the performer convincingly conveys the myriad emotions that Angela experiences, seamlessly transitioning from one to another. Nothing looks or sounds forced through Whyte’s tour de force performance.

Meanwhile, Marty Maguire, as Malachy, is convincingly argumentative, unsteady, and jarring when the character is drunk. But the actor also imbues Malachy with a tenderness that we keenly sense, especially when he interacts with his children.

Speaking of Malachy’s offspring, Eoin Cannon plays Frank at different ages, including as a child. Cannon also narrates the tale as Frank. With a change in body posture and voice, the actor switches smoothly between young Frank and a robust narrator. And just as Whyte does with Angela, Cannon nails the multiple emotions that Frank experiences, without any of them sounding or looking forced.

Amanda Minihan imbues Grandma with gruffness, but the performer refrains from playing a hateful character. Minihan plays Grandma as a woman who feels it’s her duty to provide for her family, however she may feel about her son-in-law.

Meanwhile, Norma Sheahan plays moneylender/landlord Brigid Finucane with an aura of severity and bitterness. However, Sheahan brightens up considerably toward the end, when her character becomes thankful and happy.

Brigid Shine… shines as Frank’s girlfriend, Theresa Carmody. Shine radiates charm and a zest for life, which makes her character’s death that much more tragic.

Other cast standouts include an affable David O’Meara as Frank’s pleasant and caring Uncle Pat.

Director Thom Southerland finds the balance between darkness and lightheartedness, the serious and the comic. The production’s pace is fluid, which is also a credit to Southerland. Also, kudos to Southerland for creating striking stage pictures.

The performers possess singing voices that are expressive and strong, but never unpleasant. And a lively orchestra accompanies them, led by musical director David Hayes.

Lighting designer Sinead McKenna’s lighting is bright during upbeat scenes, and darker during somber scenes. The lighting is also intense and non-realistic when it needs to be.

Francis O’Connor does double duty as the set and costume designer. O’Connor has created a spacious two-level playing space that includes structures with ladders, on which the actors sometimes stand atop. This allows director Southerland to easily highlight actors when necessary. Also, the structures with ladders stand for a ship, for instance, when the McCourts leave New York, bound for Ireland. Drab, grey bricks reinforce the story’s bleakness.

Ultimately, Angela’s Ashes is about humanity’s resilience in the face of hard times. The story can and should inspire us, particularly today, to persevere while never losing hope.

The Pat Moylan production of Angela’s Ashes: The Musical remains available to stream on demand through Sept. 22. For $30, you receive 48-hour on demand access. To reserve, go to irishrep.org. Also, the box office phone number is (212) 727-2737. 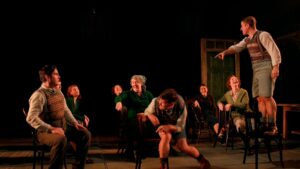 Photo courtesy of the Pat Moylan production of Angela’s Ashes: The Musical.

Frank (Eoin Cannon, front left) is the object of ridicule in class as his classmates taunt him for being a “Yankee.”