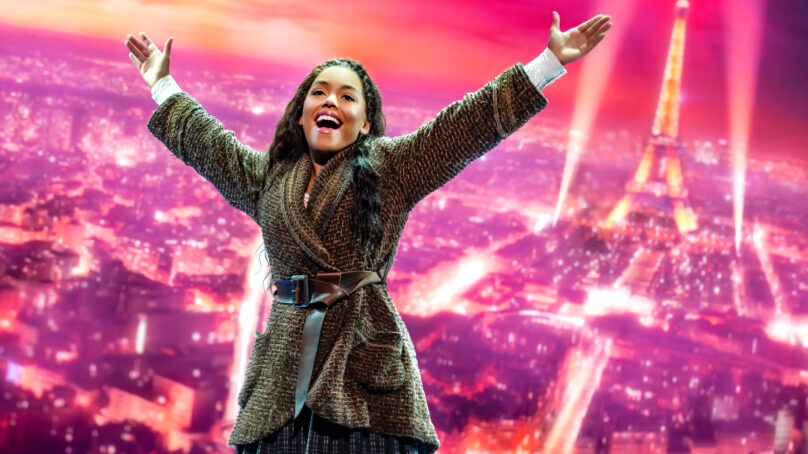 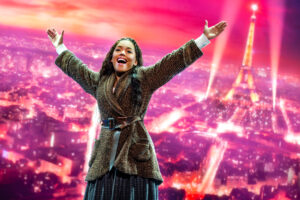 Anya (Kyla Stone) goes on a journey into her past in the non-equity touring production of Anastasia, currently playing in Miami.

A ride up the Eiffel Tower and a journey by train through the early 20th century European countryside are some of the dizzying visual delights one experiences while watching the stage musical adaptation of Anastasia.

And you do not have to leave your hometown to experience the thrills. In fact, the show is traveling the country in a captivating and believable non-equity touring production  playing in Miami through Sunday, March 27, before heading north.

Those visual thrills come courtesy of Aaron Rhyne’s enthralling cinematic-style projections. They tend to make the stage seemingly disappear. Undoubtedly, the vivid projections are the strongest part of the musical adaptation, which whisks us from turn-of-the-century Russia to 1920’s Parris. We sense that we (and the stage) are moving. Fortunately, you can keep the Dramamine at home. Even if you are prone to motion sickness, chances are you will not experience it.

At the center of the award-winning and nominated stage musical are questions from the distant past. Namely, what if Duchess Anastasia Nikolaevna, the Russian Romanovs’ youngest princess, survived the Russian Revolution (1917-1923), unlike her family, whose members perished in 1918? In addition, what if she reappeared a decade later, reuniting with her dowager grandmother and claiming the family fortune? The answers come in this picturesque show, adapted from the 1997 Fox Animation Studios film.

While Anastasia’s basis are historical events, the musical does not come across as a history lecture. And while the show looks gorgeous, the visuals do not obscure a human, emotional element that serves as the show’s beating heart. For instance, we witness human beings losing and mourning multiple members of their family. In addition, we watch as an amnesic Russian street sweeper named Anya tries desperately to determine her past and identity. Also, we empathize with the Dowager Empress, Maria Feodorovna. She watches and listens, with frustration, as many young women falsely claim to be her beloved granddaughter, Anastasia. Obviously, they are after the money the Dowager Empress has offered as a reward for Anastasia’s return.

Anastasia’s plot is complex, so attention must be closely paid. And it takes a while before, at the end of the long first act, Anya begins her journey to the past. Further, the live show could do without some of the additional songs. They do little to move the plot along, and are not as memorable as the haunting, chill-producing “Once Upon a December,” the cheery, “Learn To Do It,” and the power ballad, “Journey to the Past.” The best of the rest of the score includes “Stay, I Pray You.” It is an anthemic number whose melody seems suffused with earnest emotion.

Fortunately, the stage musical’s creators, librettist Terrence McNally, composer Stephen Flaherty, and lyricist Lynn Ahrens, did not include the movie’s mad, melodramatic villain, Rasputin. Also, thankfully absent from the stage adaptation are a vampire-like figure and an albino bat sidekick. Instead, the stage musical features Gleb Vaganov as the antagonist. He is a career officer in the Boshevik secret police, passionately and unbendingly defending the new order. By adding this character (think Les Miserable’s Javert), and subtracting Rasputin and his pals, McNally adds more intense dramatic conflict to the tale.

Gleb’s father played a major role in assassinating Tsar Nichols and his family (Anastasia’s family). Does he finish his father’s job by killing Anya, who might be Anastasia? Or, does he give in to his fascination with the young woman. Just as Les Miserable’s Javert tries to hunt down Jean Valjean through the years, Gleb is on a similar mission with Anastasia.

Speaking of sexual attraction, Brandon Delgado, as Gleb, fails to convince us that his character harbors feelings for Anya. And we do not sense his struggle to pull (or not to pull) the trigger. On a positive note, his commanding Gleb possesses unyielding conviction and determination.

Meanwhile, Kyla Stone delivers an emotionally-rich performance as Anya. She invests the character with convincing passion, determination, grace, pride, and dignity. No doubt, she is a strong female character, and Stone impressively plays her as one.

Just as Anastasia features a journey into the past, the titular character undergoes an emotional journey in song. This is particularly true when she sings “Journey to the Past.” Stone sings the number with conviction, while sounding and looking natural as she emotes through song. In fact, the entire cast possesses expressive and strong voices. A  rich and pleasant-sounding live orchestra accompanies the performers.

The cast members are triple threats. In addition to acting and singing, they execute the varied choreography with flair. The original choreographer was Peggy Hickey. For the touring production, Bill Burns is recreating it. The dances range from jazz age Charlestons to imperial Russian Ballet.

While Anastasia calls to mind Les Miserables, especially through the character of Gleb, there is also a hint of My Fair Lady. Specifically, a pair of conmen, Dmitry and Vlad, audition a number of young women to pretend that they are Anastasia. The conmen hope to win the reward money that her grandmother offers for Anastasia’s return. When Anya appears before them and says that she does not remember her identity or past, Dmitry and Vlad see a perfect opportunity. To prepare Anya to appear before the Dowager Empress as Anastasia, the duo schools her on the proper way to move. When she meets with the Dowager Empress, Stone’s Anya/Anastasia seems more dignified.

As Dmitry, Sam McLellan is conniving, sly, impulsive, and hyper without overdoing it. Certainly, McLellan’s Dmitry is an energetic character, who also imparts charm and sincerity. Dmitry is hardly the most upstanding citizen, yet McLellan makes him likable and easy to root for. And Bryan Seastrom conveys an endearing charm as Vlad, Dmitry’s right-hand man.

Gerri Weagraff, as the Dowager Empress, plays the character at first with a touching grandmother’s affection. Paired with a sweet Taya Diggs as “Little Anastasia,” the opening scenes are heart melting. During these moments, the haunting “Once Upon a December” sounds like a soothing lullaby evoking carefree childhood memories. Later, Weagraff makes the Dowager Empress believably bitter and weary; the number of imposters pretending to be her granddaughter trouble her.

Countess Lilly (an animated Madeline Raube) is part of a subplot that saps the dramatic momentum a bit from McNally’s otherwise moving and humorous book.

Scenic designer Alexander Dodge’s detailed sets are opulent and majestic, befitting royalty. The varied sets seamlessly move on and off the stage.

Projection designer Rhyne and set designer Dodge had wanted to “blur the line between what is a physical piece of scenery and what is a video projection,” Rhyne wrote in a souvenir program. Further, the duo set out to “really create an integrated design where video and scenery go hand in hand.”

They have created an authentic-looking world, and draw us into it. For example, a striking palace appears, seemingly out of thin air. Also, gun-toting, flag-waving soldiers appear silhouetted against falling snow and raging fire. It resembles a real war zone. That can be particularly painful to see today, with a real war playing out between Russia and Ukraine.

Indeed, Anastasia can resonate painfully but truthfully today. Specifically, immigrants deported when their children were babies may leave their offspring without much knowledge of their past. And so, naturally, these offspring may seek to journey to their pasts — like Anya.

The non-equity national touring production of Anastasia runs through Sunday, March 27, at the Adrienne Arsht Center for the Performing Arts of Miami-Dade County, 1300 Biscayne Blvd. in downtown Miami. Showtimes are 8 p.m. Thursday through Saturday, 2 p.m. Saturday, as well as 1 and 7 p.m. Sunday. For tickets, go to https://www.arshtcenter.org/Boletos/Calendar/2021-2022-Season/Broadway-in-Miami/Anastasia. For information about future touring stops, go to https://anastasiathemusical.com/tour. 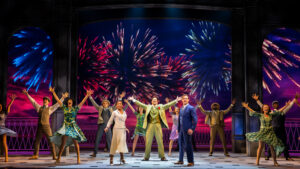 The cast of the non-equity touring production of Anastasia exults against a backdrop of fireworks.