Of course, one can attribute the same qualities to Greenspan’s lyrical play adaptation. Indeed, the multi-award winning theater artist’s use of verse heightens the elegance and sophistication of Wilder’s language. In particular, Greenspan’s writing possesses a musical quality that never detracts from Wilder’s examination of, among other things, life, death, relationships, destiny and divine intention. In other words, why does one live following an event, while another dies?

But Greenspan’s adaptation is also a love letter to, as well, a gentle parody of theater practices and the attitudes of practitioners and audiences.  Therefore, the versatile artist’s playful, comedic style is welcome.  Wilder fans will appreciate that Greenspan has left much of Wilder’s text intact.

The proof is at Miami Beach’s Colony Theatre, home to the daring, nonprofit, professional Miami New Drama. Through Nov. 17, the company is mounting a mostly strong production of “Bridge,” which is experiencing its second-ever staging. “Bridge” represents Miami New Drama’s second Wilder triumph in a couple years. In 2017, the company presented a riveting world-premiere of a multi-lingual production of “Our Town.” 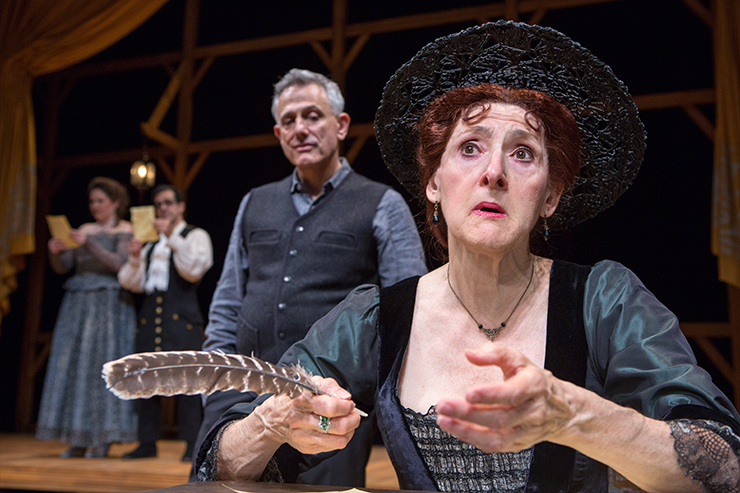 Mary Lou Rosato as Dona Maria in The Bridge of San Luis Rey. Actor-Playwright David Greenspan is in the background.

Similar to that Wilder classic, “The Bridge of San Luis Rey” focuses on the fragility of life. At the same time, “Bridge,” like “Our Town,” offers an honest yet somehow comforting message about death. For instance, consider Greenspan’s – and the novel’s – last line: “There is a land of the living and a land of the dead and the bridge is love – the only survival, the only meaning.”

The bridge to which Wilder and Greenspan refer is one in 1700s Peru, where the story is set. Five travelers are among the multitudes to cross the famed, yet less-than-sturdy bridge. It is a “mere ladder of thin slats.” Come to think of it, the bridge’s frailty can serve as a metaphor for the delicate nature of life.

The adapter’s familiarity with the famous writer is evident from the beginning. For instance, Greenspan has adopted a meta-theatrical format that dispenses with the “Fourth Wall.” Actors, in full view, are on stage, conversing with each other even before the action begins. There are no pre-curtain announcements. The adapter, playing the narrator, simply launches into his opening monologue.

Greenspan addresses us, plays himself (in addition to another character) and interrupts the action in a stage manager-like role, similar to “Our Town’s” Stage Manager. Greenspan (as himself) even explains some of his playwrighting decisions for Bridge. In addition, in a nod to Pirandello, at least one character essentially refers to Greenspan as the writer who created him.

To make matters further interesting (and further complex, many might add), just as Greenspan guides the action on stage by interrupting the proceedings, he is actually directing this production. Further, he’s playing a stage director named Uncle Pio.

What ties all this neatly together is that, again, this play is heavily about the theater. This adaptation causes us to examine our own attitudes about this vibrant art form, its current state and why we attend live performances. Moreover, theater aficionados should delight in the gentle fun Greenspan has with the art form.

“The Bridge of San Luis Rey” is about the ties that bind humanity and people’s inherent need for connection. This is true whether it’s through letter writing, forgiveness, a sense of community or the live art form of theater.

With wit, insight, conciseness and a unique style, Greenspan adapts for the stage Wilder’s tale. Among those populating this world are twin brothers who are scribes (they copy play scripts for actors). In addition, there’s an abbess, a famous actress, an adventuring ship captain, a ruler of Peru, a lonely woman and her independent-minded daughter. Their lives intersect¦and not just through the bridge of the play and novel’s title.

Sometimes, the action is haphazard, as though the script jumps from one group of characters to another without a smooth transition.

The play’s (and novel’s) concentration on letter-writing might seem foreign to our 2019 ears in a world of text and email. However, it can serve as a reminder. Specifically, it can remind us that our often-solitary world of instant gratification through technology and the click of a mouse might be robbing us of a simpler, personable means of connecting with others. In addition, Greenspan forces us to engage in an activity we ordinarily might currently ignore  – imagination.

Specifically, the scenic design, by Antje Ellermann, is mostly sparse. The design appropriately resembles a theater. Two wooden towers rest, one on stage right and the other on stage left. The interior of these towers serves as “offstage” space. However, we can see the actors sitting when they’re not performing. Upstage center, there’s a proscenium adorned with a fancy, open curtain, revealing wooden bars.

Ellermann’s design allows ample space for the actors to move. And to his credit, Greenspan moves the actors around the stage enough to create variety. The pacing is fluid, but sometimes actors speak too quickly. To easily follow the action, we need to be able to hear every word, especially since the play is written in heightened language. On the positive side, the performers, especially Greenspan, know which words to emphasize and when to employ telling gestures.

The director-actor-adapter possesses almost boundless energy and speaks in a robust, dramatic voice. Also, Greenspan segues seamlessly between his narrator role and as stage director/mentor Uncle Pio. Yet, sometimes his line readings rob the play of pathos. For instance, he announces the deaths of characters in a strangely nonchalant tone of voice.

The “dying” happens rather quickly, symbolized by the abrupt closing of the upstage curtain in front of a victim. This could symbolize how fast life can end.

Certainly, the script, with its copious amounts of humor and lively, clever poetry, is never depressing. But that’s not to say one or more characters isn’t feeling down and in need.

For example, Limean Noblewoman Dona Maria needs cheering up. She has an estranged relationship with her daughter, Dona Clara (an assertive, independent-minded Lindsey Corey) and drinks a lot.

With a long face, thick voice, eccentric facial expressions and clad in a dark outfit, Mary Lou Rosato certainly looks and sounds the part of Dona Maria. The performer imbues the character with a melancholic demeanor and a desperate neediness for recognition. Evident pain is etched in her face, as a sad, yet somehow glamorous aura surrounds her. It’s clear this Dona Maria hails from the upper class, yet she’s hardly content. 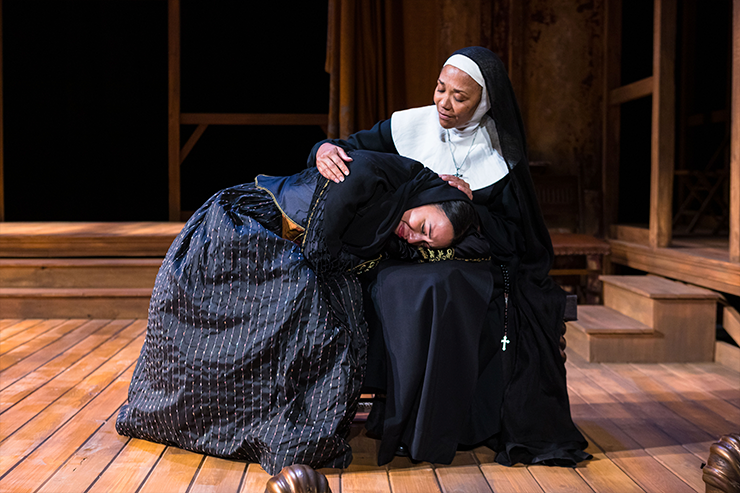 Meanwhile, Jeanette Dilone seems a bit young for the part of a famous, seasoned actress, Camila Perichole. But Dilone makes up for it with a convincing narcissistic attitude and pushy personality. Also, Dilone makes the character’s grief palpable during Perichole’s descent into illness and hopelessness.

It’s up to an abbess named Madre Maria to comfort the forlorn and sick. In the role, Karen Stephens lends the nun a sense of compassion and grace.

Twins Esteban and Manuel sorely need such qualities due to their predicament. Kevin Veloz and Austin Reed Alleman play these young men through forceful, yet credible performances.

Other production strong points include Elizabeth Hope Clancy’s period-specific, character-defining costumes and Yuki Nakase Link’s lighting. The latter creates just the right intensity for scenes to establish appropriate moods. “The Bridge of San Luis Rey” is about many things. Plenty of timely and timeless ideas and themes to ponder are packed into this work’s roughly 80-minute, no intermission running time. Yet, perhaps it’s the last line that stays with us the most – especially during these divisive times.

“In the end, love is essential.”

Miami New Drama’s production of The Bridge of San Luis Rey runs through Nov. 17. Performances are at the historic Colony Theatre, 1040 Lincoln Road, Miami Beach. Showtimes are 8 p.m. Thursday through Saturday and 3 p.m. Sunday. Tickets range from $39-$65. For information and tickets, click here

Measure for Measure’s ‘In the Heights’ is touching, electric