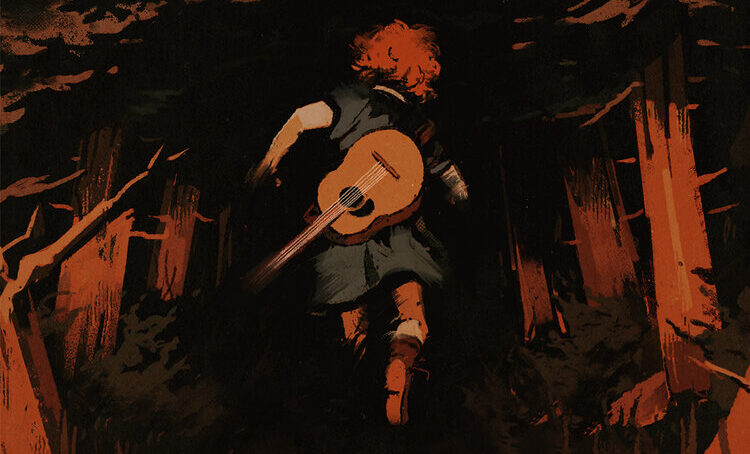 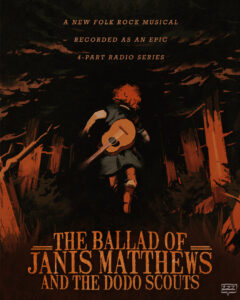 Giancarlo Rodaz was not a child of the 60’s. But Rodaz, who is in his mid-20’s, loves music from the era, and researched the decade. Further, he feels that musical theater could use more 1960’s shows. So, the versatile, visionary South Florida theater artist wrote one.

Rodaz, associate artistic director of South Miami’s Area Stage Company, titled his new, original musical The Ballad of Janis Matthews & The Dodo Scouts. He wrote the book and lyrics, and also plays guitar in the band accompanying the actors. COVID-19 may have temporarily prevented a live world premiere production. But, the pandemic has not stopped Rodaz and his co-creator from presenting the show as a radio play-style series of podcast episodes. In fact, part one (of four) premiered at 7 p.m. EST on Saturday, Nov. 28. One can watch it at https://www.youtube.com/channel/UCy0hLRkXjIamK6miNiW_34w/videos. Episodes remain available to watch after they premiere.

Area Stage describes the show as an “all-new folk-rock musical.” Further, it’s a “love letter to the 1960’s and to the American Family. Based on an original idea by Giancarlo Rodaz, the story, set in 1960’s Colorado, follows Janis Matthews, a young girl who runs away to summer camp in order to escape her broken home. On her journey, she finds herself at the center of a mystery.” It forces her to question her ideas of responsibility, friendship, and family.

“This first of its kind scout musical challenges us to reassess our responsibilities within our families and communities,” according to Area Stage Company.

While the musical features an original story, Rodaz said he named the main character after Janis Joplin, an American singer-songwriter. She sang Rock, Soul, and Blues music from the early 1960’s through 1970. Joplin died of a heroin overdose in 1970. In addition to Joplin, Rodaz and composer Rachel Dean listened to music from the likes of the Beatles, Bob Dylan, and 60’s/70’s folk artists for inspiration.

“The music supports the story really well,” Dean said. In particular, the “raw and gritty sound” reflects the characters, who are “a little rough around the edges,” Dean added. “We tried to make it sound like it was coming from their hearts.”

Rodaz and Dean spoke highly of the cast. As a matter of fact, Rodaz called the cast of 10 performers the best group with whom he has worked.

“I think the cast is incredible, I’m so impressed with them,” Dean said.

In particular, Rodaz sounds ecstatic that he was able to find and cast Staci Stout in the title role.

“She is Janis, she’s perfect,” he said, adding that she looks just as he imagined the character.

Stout is a professional performer who has played roles in live theater, as well as on film and television. On stage, Stout has played the titular character in such shows as Peter Pan, Annie Get Your Gun, and Annie.

“Once I heard her (as Janis Matthews), I was like ‘There you Go,’” Rodaz said. “She made us cry so many times in the studio.”

Rodaz said he discovered Stout through a “complete fluke.” Specifically, she was a “friend of a friend whose name came up on social media.”

Praise within this group of creatives doesn’t end with Stout.

“I just love everything she writes,” Rodaz said, referring to Dean. He further described her as creative, motivated, and someone possessing a “fierce, creative spirit.”

“I can’t speak highly enough of Rachel Dean,” Duerr said. “She’s a genius, everything she touches turns to gold.”

Rodaz, who started writing The Ballad of Janis Matthews & The Dodo Scouts in late 2014, met Dean when she worked for Area Stage Company. At the time, Dean was studying music composition at The University of Miami. Rodaz told her about the musical he was writing. And Dean, in turn, asked Rodaz to help her with her musical thesis. At the time, both were young and eager to create something, Dean said. She added that therefore, it made sense that they’d work together. Rodaz is a “visionary” while Dean said she’s more of an “executor.” In other words, she takes other people’s visions and helps bring them to life.

“Working with (Rodaz) has been such a dream,” Dean said. Specifically, while he has many ideas, Rodaz is willing to discard those that don’t work. Dean added that many writers are “precious” with their material; its their baby, and they may not be willing to let go of something in service to the greater story. But that’s not Rodaz.

Rodaz said he grew up in a “very happy family.” However, through his research and interactions with youth, he came to realize that isn’t the case for many children. Instead, some hail from broken families. Such a realization helped inspire The Ballad of Janis Matthews & The Dodo Scouts.

Its first workshop at Area Stage occurred during the Summer of 2015. Following that, the professional Miles Square Theatre in Hoboken, N.J. staged the show as a youth summer production in 2016. A second workshop production took place at the end of 2018. A live professional premiere is scheduled for Summer 2021. But in the meantime, Rodaz wanted to put his musical back onstage. Initially, Area Stage considered doing a reading on Zoom. However, Rodaz said he doesn’t like that medium for live theater.

“It removes anything that’s possibly magic about doing a live show,” he said.

Rodaz considered other ideas before settling on a podcast series.  He rented a recording studio in Miami Beach for two weekends, and hired a professional, seven-piece band. It comprises two guitars, bass, percussion, fiddle, mandolin, piano, and banjo. The instruments work together to produce a sound that doesn’t sound like traditional musical theater, Rodaz said.

Then again, The Ballad of Janis Matthews & The Dodo Scouts isn’t a big, splashy musical theater piece. Rather, it’s a musical with folk and rock music.

“I think it’s absolutely delightful, hilarious, and moving,” Dean said. To her, the show is about a girl trying to escape the worst aspects of her family. However, she later realizes that she’s inherited some of those aspects.

The take home message, Dean said, is that family’s worth fighting for.

MNM’s ‘Closer Than Ever’ is creative, heartfelt