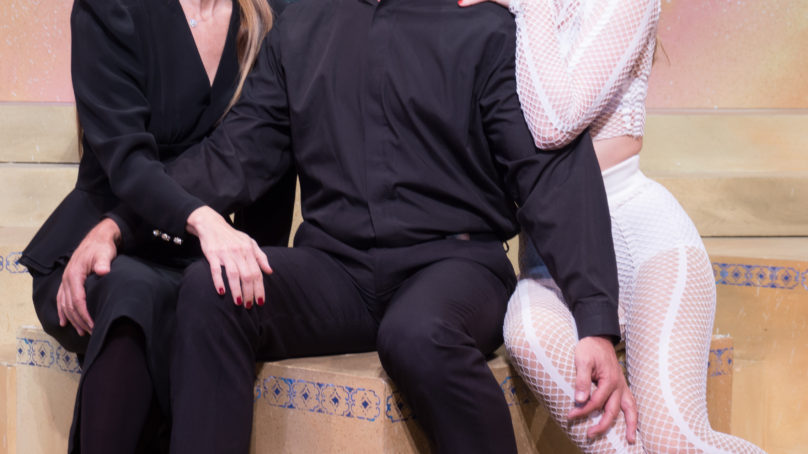 Taken into the mind of a frustrated, tortured artist

MARGATE, Fla. — There’s a moment during the Tony-Award-winning musical “Nine” when a cacophony of voices drifts through the air, belonging to women speaking, or even shouting, on top of one another.

The resulting noise vividly symbolizes the chaos racing through the mind of renown but struggling Italian filmmaker Guido Contini, an artist about to turn 40 and suffering a mid-life crisis, as well as writer’s block, after a long period without a hit.

In Broward Stage Door Theatre’s impressive production of this eloquent, funny and relevant 1982 musical, nary a syllable can be made out during the cacophony.

This production of “Nine,” a show which nabbed several Tony Awards, including for Best Musical on Broadway, is on-stage in one of Broward Stage Door’s two auditoriums through June 11.

As Contini, an excellent Paul O’Donnell presses his hands to his head as though a migraine were coming on during the cacophonous scene. He shakes his head, as though he’s trying to block out the voices.

They belong to women who’ve helped Contini attain the stardom and feats he’s achieved. His successful career has enabled him and his wife, Luisa (Elizabeth Sackett) to live a comfortable life.

Now, ironically and without intending to, those very women are about to destroy the couple’s happiness.

Hey, nobody said the life of an artist is easy or always makes sense. If you’ve ever tried – and failed – to create something, it gives you a measure of comfort to know that even someone of Contini’s caliber (in a song, he’s compared to Charlie Chaplin) can experience a period during which the creative impulse just isn’t working.

That’s hardly the case for the cast and crew of Broward Stage Door Theatre’s elegant, polished production, during which periods of Contini’s imagination and reality seamlessly change – and even coexist; at times, the frustrated filmmaker can’t seem to distinguish one from the other. The blurred lines between an artist’s creative world and his actual existence is a central theme explored in this musical, originally created by Maury Yeston (music and lyrics) during a musical theater workshop in 1973. Playwright Arthur Kopit wrote the musical’s book, based on the 1963 Federico Fellini film “8 ½.”

The strengths of this production, directed with sensitivity and an attention to detail by Peter J. Loewy, include Michael McClain’s symbolic set. Platforms of various shapes and sizes are arranged haphazardly, perhaps in an effort to suggest Guido’s confused state of mind. Arches also occupy the playing space, but not all of these majestic structures are complete; some are missing one half, which can suggest that the relationships between Contini and the women in his life, particularly his wife, aren’t whole.

Guido and Luisa’s marriage is crumbling, just like his work as an artist is falling apart. He cannot think of an idea for his next film, which doesn’t sit well with his producer, Liliane La Fleur (a no-nonsense,  commanding, booming-voiced Ellie Pattison, who demonstrates great stage presence).

The voices and images of all the women in Contini’s life are stuck in his mind, perhaps serving as the source of his writer’s block. The hot Carla Albanese, his mistress, can single-handedly distract such a man not just from his marriage but his creative process.

As played by Alexandra Milbrath, Albanese’s demeanor would distract any man from just about anything. Milbrath exudes a steamy sensuality, moving slowly with suggestive poses, although there’s nothing too risqué in her performance. Still, some might feel like covering the eyes of the actor playing Guido as a 9-year-old (Jack Rodman during the reviewed performance, not solely cute but exuding a level of maturity and a clear, expressive voice during his solo, “Getting Tall.”)

For those unfamiliar with “Nine,” the musical includes flashbacks to the filmmaker at age 9, which the adult Contini watches. It takes a trip back to his childhood, and a meeting (as an adult) with his muse (Victoria Lauzun) to help rid him of his writer’s block.

“Nine” illustrates that sometimes, as a creative person, ideas are staring us in the face, even though we may not see them. The oft-repeated advice to “write what you know,” is suggested in “Nine,” but the musical illustrates that such a mindset doesn’t guarantee a work of art which satisfies everyone. In fact, the dictum to “write what you know” can cause emotional pain to some, as we see in the show.

In an especially surprising bit of irony, it takes, in part, Contini’s 9-year-old self to stir the adult artist back on the right path, not only saving his life but showing him what’s truly important in his life.

In “Getting Tall,” Young Guido essentially tells his 40-year-old self that it’s time for him to grow up. It’s one of the simpler songs in “Nine,” which contains intricate harmonies and sophisticated lyrics that bring to mind Stephen Sondheim. They’re sung with skill by a passionate, talented cast, backed by a strong live orchestra, which, while vibrant, never drowns out the actors.

The women, in addition to playing their individual roles, double as a kind of Greek chorus, commenting on the action through song.

The songs may not all be memorable, but they, for the most part, add depth to the characters and move the plot along.

The number “Be On Your Own,” allows Luisa to vent at her husband. While singing it, Sackett exudes intense pain and frustration, which had been simmering throughout the production and reaches a boiling point with this number.

Sackett’s Luisa is hardly a spiteful woman, but one who deeply cares about her husband. It’s safe to say he’s been ignoring her, and that has pushed her beyond what she can take.

As Guido, a sensual, passionate, proud and charming O’Donnell never resorts to self-pity while portraying the suffering filmmaker. But there are clearly moments when he’s frustrated. All those moments build up to one final instance, during which O’Donnell’s Guido spreads his arms out wide, as though gesturing and crying out to the heavens for help, not getting it and falling to his knees, his face etched with pain and suffering. You can’t help but feel for him. Watching this tortured artist during the scene, you feel as though you’re witnessing a tragic Shakespearean hero.

Guido, like the other actors, possesses a clear, expressive singing voice and convincingly speaks and sings in an Italian accent. The only drawback in O’Donnell’s performance is he sounds a bit too similar at times to Antonio Banderas, the renown Latin actor who won a Tony Award for playing Guido in the 2003 Broadway revival.

It’s easy to picture Banderas in the role, conveying his signature seduction.

Lighting designer Ardean Landhuis helps establish mood with his use of various colors and reinforces the non-realistic aspects of this tale.

It’s one in which a famous, talented artist is stripped naked to reveal him in all his vulnerability and humanity.

Through him, we’re moved to look inward to find our own failings and faults.

LCT’s ‘The King and I’ is an emotionally-rich experience, as national tour proves

Next
Actors Playhouse at the Miracle Theatre
Read more