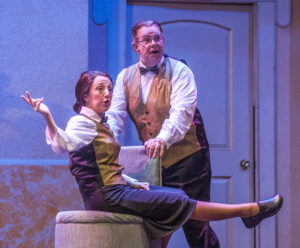 CORAL GABLES, Fla. — Even if everything’s calm and orderly “behind the scenes,” moments before a bride and groom walk down the aisle, you never know what drama might be unfolding among the guests.

Aunt Delores might be a wreck in a happy kind of way, crying profusely as she recalls her about-to-be-married nephew taking his first steps, mouthing his first words, etc. One can only imagine the carrying-on in the audience if the Steinberg-Howard wedding were a real-life affair. One would hope guards were on hand to ensure the pandemonium wouldn’t blow the building apart as though the chaos were the cyclone in “The Wizard of Oz.”

Controlled chaos are apt terms to describe what’s happening on the stage of Actors’ Playhouse at the Miracle Theatre near Miami, where the fictional Steinberg-Howard wedding is running through June 11.

The ceremony takes place on scenic designer Tim Bennet’s two-story, immaculate, roomy set. It allows the actors plenty of space to move and lets us know that we’re at an upscale affair. Ellis Tillman’s upscale costumes add to this ambiance, as does Eric Nelson’s lighting design, low-key for intimate scenes and more intense for louder, festive ones.

The wedding is the main attraction (or is it?) in the musical farce/comedy “It Shoulda Been You,” which comes directly from the 2015 Broadway production. It ran from March 17 of that year until Aug. 9.

Thanks to Actors Playhouse’ Artistic Director David Arisco and a fine cast, the strong production of this award-winning comedy is chaotic but not out of control; the door slamming and other hallmarks of farce all carry an authentic aura and one never fears one or more actors will accidentally collide or bump their heads.

Arisco, a 29-year, versatile playhouse veteran who is directing the production, expertly varies the pace; at times it’s frantic, at other times the air is thick with anticipation. The comedic timing is also superb.

Secrets soon spill faster than a knocked-over glass of champagne would splash a wedding dress.

In this seemingly perfect wedding, planned out with meticulous detail, there’s ample opportunity for conflict to reign; the bride’s Jewish, the groom’s Catholic, the parents are less than thrilled…well, it would be a shame to give away too much more about what unfolds before the night ends.

The show’s as charming and funny as the 1991 film “Father of the Bride,” starring Steve Martin, but in terms of chaos, it’s closer to the Robert De Niro, Ben Stiller series of movies “Meet the Parents (early 2000s) – especially the frantic finales “Meet the Fockers (2004) and “Little Fockers” (2010).

One of the strengths of “It Shoulda Been You” is its unpredictability. You just don’t know where this story is headed; book writer and lyricist Brian Hargrove and composer Barbara Anselmi offer no hints.

The element of surprise is present from the beginning, when the first person to speak and sing isn’t whom we think she is.

Some of the lyrics are clever and add depth to the characters’ feelings and emotions, although the music isn’t particularly memorable and the characters are more comic “types” than well-drawn, three-dimensional people.

Soliloquies in song are particularly effective at allowing a character to sing what he or she likely wouldn’t dare say in front of people. Consider “Jenny’s Blues,” sung by Jenny Steinberg, the bride’s older sister/co-maid of honor, who is overweight and the target of teasing by her mother, Judy.

Jenny has basically organized the entire wedding by herself and feels she isn’t as appreciated as she should be. She holds nothing back while expressing her feelings through song:

You better stop right there, ’cause you know that’s not fair. I pulled this off without a glitch! So say goodbye, I’m done, I’m gonna have some fun. I’m tired of being your bitch!

Cindy Pearce endows Jenny with a wry sense of humor and, far from resorting to self-pity or depression, she conveys a refreshing determination and drive to make something of herself. She also has a booming, clear expressive singing voice (the actors are accompanied by a six-member live orchestra that has its timing down pat with the cast and plays at just the right volume).

Jenny also deftly sings the cleverly-rhymed, “I Never Wanted This.” Its lyrics include:

It’s harder to be more descriptive, yet simple than in the beautifully written line “I love you more than life itself,” sung by Marty Kaufman, the bride’s ex-boyfriend, who is Jewish and the choice of a son-in-law for the bride’s parents. His entrance is the inciting incident that sets the conflict in motion.

Kaufman is played with sincere determination by Tim Dolan, whose performance makes you believe that marrying the bride, Rebecca was and is his life’s goal. Rebecca is played by an emotionally versatile Erica Lustig, who gives us an endearing young woman who is obviously not just a sister, but a sister’s best friend).

Kaufman and the groom, Brian (a nimble, mild-mannered Taylor Hilt Mitchell) are among the characters with mellow personalities.

In this well-orchestrated musical with varied characters, the same can’t be said for the two mothers, Judy Steinberg and Georgette Howard.

Steinberg, the bride’s mother, is played at times as domineering and commanding and at others as a meddling, but well-meaning Jewish mother who obviously adores her daughter.

As Georgette, Marcia McLain makes her presence known in a different way. Her Georgette carries an air of a socialite, a well-off, impeccably dressed woman who gets her way, or else…

The comic material might get most of the attention, but at its core, the musical’s message, without being preachy, is to accept and embrace people, even though they might be different than you.

Arisco ensures this relevant message doesn’t get lost in the chaos.

“It Shoulda Been You” continues through June 11 at Actors’ Playhouse at the Miracle Theatre,

Taken into the mind of a frustrated, tortured artist