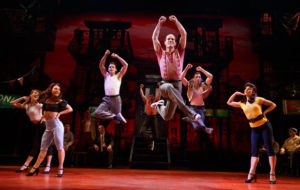 Athletic, even acrobatic choreography helps tell the ‘tale’ in A Bronx Tale. Pictured above are touring cast members.

FT. LAUDERDALE — A couple of reviews of A Bronx Tale, the Broadway musical, describe the show as a blending between Jersey Boys and West Side Story.

Many might rightly agree. However, we should add to that mix Guys and Dolls as well as Memphis the Musical.

True, A Bronx Tale features a fictional fledgling singing group. Perhaps, if they were real, one could foresee them becoming another Frankie Valli and the Four Seasons.

Meanwhile, the show’s partial focus on forbidden love and, in particular, a mixed-race couple might remind many of West Side Story/Romeo and Juliet as well as Memphis the Musical.

It’s strange, though; despite the comparisons, the 1960’s-set A Bronx Tale, unlike the other aforementioned shows, doesn’t come close to featuring anything remotely resembling memorable music. And the lyrics are ordinary, at best.

But part of the musical’s appeal is that its plot contains enough hints of the other shows that patrons should nod pleasingly. Chances are, they’ll find comfort in Bronx’s familiar tale.

Clearly, despite the show’s dark and unsettling moments, a South Florida audience seemed to be enjoying themselves during opening night of a Ft. Lauderdale run of an equity national touring version.

Indeed, A Bronx Tale contains enough ingredients to make it not just palatable, but pleasing and a show well worth seeing. Those ingredients include colorful and likable characters, humor, chances for reminiscing, as well as timeless and cautionary lessons.

But this live musical, based on an original one-person play, which spawned the well-known 1993 film, is not an improvement over the riveting movie.

While the Broadway musical is faithful to the film, its music is truly forgettable. In fact, you’re much more likely to remember this cast’s deft comic timing, Sergio Trujillo’s athletic, acrobatic choreography, and the performers’ expert, electric execution of those dance moves. They help reinforce this show’s tough, gritty story, much like West Side Story.

But it’s hard to reconcile the fact that a tale featuring cold-blooded murder, racial tension, fist fights, beatings with a baseball bat and a bombing is set to pleasing, bright Doo-Wop music. Also, dangerous, dramatic moments occur briefly. Then, the characters, who sometimes sing during odd times, forget these heart stopping moments. As a result, we don’t remain riveted long enough.

And does the second act really need to begin with the words, “This is a Bronx Tale?” We heard this and other expository information during the beginning of the first act.

For those unfamiliar with this “tale,” it’s an autobiographical, part coming-of-age, part memory story. The authors have set it, of course, in the Bronx during 1960 and 1968.

A late-teens Calogero, our narrator, recalls his childhood, when a murder he witnessed forced him to grow up too fast.

At age 9, Young Calogero (Shane Pry on opening night), finds himself drawn to the cool, colorful mobster, Sonny. At the same time, he obviously loves his father, Lorenzo. As a result, he finds himself torn between loyalties. Does he follow the advice and wisdom of his blue-collar, hard-working, caring dad. Or, does the boy heed advice from the flashy, cocky, yet charming Sonny?

Sure, this story is set nearly 60 years ago. Still, similarities abound. Of course, there’s no denying that racial tensions, such as those that the writers depict in A Bronx Tale, are frighteningly similar today. Meanwhile, at least some youngsters remain impressionable and thus vulnerable to messages from, for instance, opportunistic marketers and video game manufacturers.

Come to think of it, Hollywood, and society in general, still glorifies gangsters. So, you can imagine how a 9-year-old boy might remain in awe of a tough, flashy and charming mobster who seems cool and in control.

In A Bronx Tale, such a man is Sonny. He’s a complicated one. To be sure, he’s not exactly an upstanding citizen. After all, he’s committed at least one heinous act.  And he believes in winning over people through fear, instead of love. He’s commanding, fearsome and cocky. Still, those under his control widely admire him. Perhaps, they fear him. But, underneath that rough exterior is a soft, caring heart.

Sonny’s a difficult role to play. An actor shouldn’t make us fear that he’s a child molester who will make kidnap Calogero — or worse. Further, we must not be afraid to pass this man in a dark alley. Even so, a portrayal requires a delicate mix of toughness, confidence, cockiness, soft-heartedness, flashiness, charm and sincerity.

As Sonny, Joe Barbara may not make audiences forget about Nick Cordero, who originated the role on Broadway, earning a Drama Desk nomination. Neither is Barbara likely to make audiences forget Chazz Palminteri. He played Sonny in his original autobiographical play, in the movie and in the Broadway production.

While Barbara isn’t frighteningly threatening, his Sonny is intimidating and commanding. The actor lets everyone know his character is someone you want on your side.

Meanwhile, Barbara finds the cockiness and flashiness in Sonny. And through these traits, as well as sincerity, he turns Sonny into an endearing, charming character. In short, the imposing Barbara finds the right balance between toughness and softness.

Speaking of tenderness, Richard H. Blake conveys a loving father as Calogero’s dad, Lorenzo. Strangely, though, the actor lends a cockiness to the man that bears too strong a resemblance to Sonny. Further, when Lorenzo confronts the colorful mobster regarding his relationship with Calogero, we don’t sense strong paternal protection instincts. The tension is almost non-existent.

To be sure, this production features tension. This is especially true during scenes involving racial strife. But again, such moments disappear too quickly. Shortly after them, we hear the crooning of a doo-wop singing group.

Now, this and the other genres of music serve a purpose. They establish a nostalgic mood and add color as well as liveliness to the action. So, too, does Calogero as a late teen.

Joey Barreiro portrays him with a winning mix of sensitivity, curiosity, an inherent good nature and an eagerness to tell his story. We also keenly sense the young man’s fascination with Sonny.

For instance, during one scene, a smile flashes across Barreiro’s face. It deftly conveys a mix of admiration and wonder about Sonny’s brash, commanding yet humorous demeanor. Cockiness comes so natural for Sonny he doesn’t even know he’s conveying it. And that’s part of the reason it’s easy to like and laugh not at Sonny, but with him.

Meanwhile, it’s nearly impossible not to like Calogero as a 9-year-old. On opening night, Shane Pry, who alternates the role with Brigg Liberman, conveyed the requisite precociousness, charisma, confidence and cuteness, without overdoing the latter quality. Pry also displayed some energetic moves. But it was hard to hear him or others during parts of the show. Hopefully, that won’t be the case during other performances – not with co-directors Robert De Niro and Jerry Zaks in charge.

But it possesses enough heart, humor, tenderness and relatability to please plenty of patrons.

The current equity national touring production of A Bronx Tale runs through June 23 at Broward Center for the Performing Arts, 201 SW 5th Ave. in Ft. Lauderdale. For showtimes and ticket information, visit browardcenter.org or call (954) 462-0222. For information about other touring stops, visit https://abronxtalethemusical.com/tour.