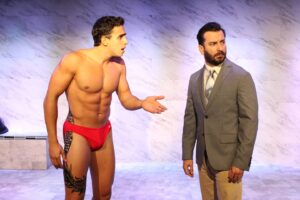 How far would you really go to win if the stakes were sky high, you encountered at least one significant obstacle, and were desperate?

Perhaps it is a question that you have not considered. But in an ultra-competitive society obsessed with winning at all costs, it may be a question worth pondering.

Lucas Hnath’s riveting, surprising, unsettling, and complex morality play and cautionary drama, Red Speedo, can at least leave you wondering what you would do in Ray’s situation.

He has spent his whole life swimming. In fact, when Red Speedo begins, it is the eve of the Olympic trials. If Ray makes the U.S. swim team, he will win a deal with the swimwear company, Speedo. And if he secures that deal, he will be wealthy. In fact, he will possess so much money that he will never need a job.

However, there is just one problem. Specifically, someone finds a stash of performance-enhancing drugs in the fridge of his team’s locker room. Whether the drugs were Ray’s or not, (there is no proof) the finding threatens his entire team’s Olympic fate.

The action that Ray takes may not surprise you. But there are surprises in store for you throughout the taut, tough, and at times tender Red Speedo’s roughly 80 minutes of intermission-free playing time.

Ray is one of four characters in Red Speedo who face dilemmas. There is also Lydia. She is Ray’s former girlfriend who, at one point, provided him with performance-enhancing drugs to improve his swimming results. There is also Peter, Ray’s brother and an attorney. However, he is transitioning away from his law career to become Ray’s sports agent. And then there is a character whom the playwright only refers to as “Coach.” As you may have guessed, he coaches Ray and his team.

Now, here is where things get complex. Lydia once used her connections in the pharmaceutical industry to secure medicine that was vital for a dying acquaintance. That person could not afford the drug. Lydia’s technically illegal action resulted in a trial and she lost her license as a sports therapist.

Peter, who was not one of the lawyers in Lydia’s case, nevertheless provided important information to the attorney opposing Lydia, helping his case. Although Peter believed he was simply helping out a fellow lawyer, he apparently crossed a legal line that he shouldn’t have. Had the judge known that Peter provided that information to the opposing counsel, he/she may have declared a mistrial.

At some point, in exchange for Lydia giving him the drugs, Ray signed an affidavit informing the judge of Peter’s action. Of course, this threatened to derail Peter’s law career. Obviously, Peter is not happy about the affidavit. Nevertheless, he remains committed to ensuring that his brother qualify for the Olympics.

Because Red Speedo is complex in its plotting, it is necessary to pay close attention to the action. In fact, it may not hurt to read the script, or at least a summary, before witnessing a performance.

Red Speedo keeps you riveted to the stage thanks to the high stakes and the conflicts between the characters. They escalate in intensity as the performance progresses.

In Red Speedo, Hnath writes in a short, clipped style of dialogue complete with sentence fragments. It brings to mind playwright David Mamet’s style, which those in the theater call “Mamet Speak.” In Hnath’s play, this style of dialogue works because it reinforces the sense of urgency among the characters and enhances the suspense.

The ambiguous ending leaves you wanting a tidier conclusion. Then again, life is hardly neat, tidy, or certain, and live theater holds a mirror up to real life.

Under Stuart Meltzer’s sensitive direction, the performances in this Ronnie Larsen Presents production are intense, yet natural. The four actors handle the rapid-fire dialogue skillfully while also making their performances sound spontaneous. In addition, the production includes impactful pauses and tense periods of silence.

Chris Anthony Ferrer imbues his high-strung Peter with an intensity and urgency that never sounds forced. Ferrer gestures appropriately. And his actions, such as kneeling by Ray, patting him on the arm or shoulder, or hugging him, seem sincere.

As Ray, Gabriell Salgado lends his character a believable passion, but also a hint of immaturity that suggests that Ray is not nearly as smart as the other characters. To his credit, Salgado portrays Ray as immature without ever making light of his character. Rather, the humor rises naturally from Salgado’s sincere portrayal and Meltzer’s careful direction.

Ray may not be the brightest individual. But he offers some simple, comforting wisdom. Specifically, he says, “We all do things that are sorta good and sorta not so good.”

Salgado is a young actor and Silver Palm Award recipient. He keeps improving with each performance he gives. Just last season, Salgado, in his professional debut, dropped jaws in his stunning performance as the Creature in Zoetic Stage’s production of Frankenstein.

Casey Sacco is assertive and determined as the troubled Lydia, who, at one point, talks about leaving the country to escape her problems. Ray desperately needs something from Lydia, which helps add tension to the proceedings.

As the coach, Jerry Seeger convincingly conveys an intense sense of loyalty to Ray – that is, until Ray hints that he might train elsewhere.

Seeger’s performance is impressive verbally and non-verbally. For instance, in the beginning, the coach listens while Peter speaks extensively during a lengthy monologue in which he praises Ray. Seeger, sporting a shaved head, as well as a slight grey mustache and beard, slants his eyebrows and folds his arms in a cynical expression as the coach listens to Peter. At other moments, Seeger stands tall and firm with his arms folded; this strong man of convictions is standing his ground.

Behind the scenes, set designer Melquisedel Dominguez has created an actual pool with warm water. The structure around the pool is tile-dominated. It looks sturdy and realistic.

The costume design, which is uncredited in the program, is character defining. Of course, the design includes the red Speedo that Ray wears. In addition, he sports a huge sea serpent tattoo which Avi Ram designed. The tattoo encircles Salgado’s body and is an impressive work of art, as is Hnath’s play and this production of it.

First, and foremost, credit Larsen. Many people know him for his risqué, sex-themed plays. However, lately he has been creating and producing work geared more toward general audiences. For example, one of his latest works, The Actors, is a wholesome piece suitable for all ages. It concerns a man who hires actors to play his folks because he misses his parents.With his production of Red Speedo, Larsen demonstrates a continued commitment to broadening his offerings beyond his usual risqué subject matter.

Larsen is an actor, director, playwright, and producer. Audiences in most major U.S. cities have seen his work. He wrote his first play in 1994 and his first musical in 2018. Twenty-four of his shows have been produced, five Off-Broadway. Also, audiences in Canada, Australia, Italy, and London have experienced Larsen’s work. 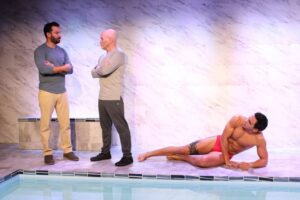