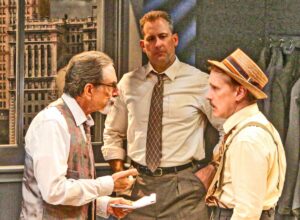 Folks, when it comes to top-notch live theater, it does not get any better than Palm Beach Dramaworks’ (PBD) Carbonell Award-deserving production of the ensemble piece, “Twelve Angry Men.”

The production features supremely-talented South Florida actors at the top of their game. In addition, they are all PBD veterans. Chances are, if you have attended a show at PBD, or other South Florida theater company, you have seen them perform and marveled at their work.

Originally, this production was going to end on Dec. 24. However, due to rave reviews, nightly standing ovations, and strong ticket sales, PBD has added three performances. Now, the production will end on Dec. 29, with two performances on Dec. 28 and one on Dec. 29. Frankly, it may be wise to buy tickets immediately; they are selling fast.

The actors are perfectly cast in their roles and deliver Broadway-caliber performances during which they disappear into their characters. In fact, the performances seem so natural and spontaneous that you feel as though you are watching not a work of fiction, but a documentary. And, under J. Barry Lewis’s detailed direction, the individual actors blend seamlessly into an ensemble that operates like a well-oiled machine.

Perhaps you are familiar with “Twelve Angry Men.” But if you are not, the play’s basis is a 1954 teleplay with the same title. There is also a 1957 film starring Henry Fonda as Juror #8.

When the play begins, 12 jurors have just sat through a murder trial that lasted about a week. The judge (unseen but heard) is giving the jurors final instructions before they begin deliberating in the jury room. A guard bolts the door from the outside, locking the jurors in.

The defendant is an 18-year-old accused of stabbing his father to death with a knife. The judge makes it clear that the jury’s verdict must be unanimous. Further, the judge says that if jurors find the teen guilty, he will not show mercy; his honor will sentence the defendant to death by eletrocution.

With the stakes this high, the unnamed jurors must put aside their personal viewpoints, opinions, and prejudices, and arrive at a unanimous decision based solely on the case’s facts. However, that can be easier said than done. Although all the jurors are male and white, (it is unclear what race the defendant is), their varied beliefs, backgrounds, jobs, and experiences are bound to influence their vote of guilty or not guilty.

At first, 11 of the jurors claim they harbor no reasonable doubt as to whether the defendant is guilty; it seems like an open and shut case. But, Juror #8 is the lone holdout. As he explains why, he begins to sow reasonable doubt in the other jurors’ minds.

Before the night is over, tempers boil over, and the playwright lays bare the characters’ various feelings, circumstances, prejudices, personalities, beliefs, and attitudes. All color their responses to the case. Also, before the play is over, one of the jurors arrives at a shocking realization. The play also lays bare problems with our judicial system, such as reluctant jurors and court-appointed lawyers who may not have wanted to take a case.

While the intermission-free production runs about an hour and 50 minutes, the night seems much longer and tedious to the jurors. Indeed, it is hot inside the compact and locked jury room, where a fan does not work well. Meanwhile, dark, ominous clouds outside suggest a severe storm is brewing. The heat (the literal kind and the heat created by the jurors’ anger), as well as the storm threat, reinforce the claustrophobic, stifling atmosphere. Further, the jurors do not seem to be making headway with their deliberations. At different points, roll-call votes are tied. A unanimous decision seems nowhere in sight.

While deliberations obviously seem long and tedious to the jurors, this production proceeds quickly, but not too fast.

Under Lewis’s astute direction, tension is palpable during heated moments between the characters. They seem naturally fidgety, argumentative, and exasperated as a hung jury becomes increasingly likely.

Deftly, Lewis and cast members contrast heated moments with lighter, more relaxed scenes. Also, wisely, Lewis highlights characters by having actors stand while they are speaking. In addition, the director moves the performers around the room. This ensures variety. Also, Lewis gives the performers actions to do which make sense. For instance, they wipe sweat away, fan themselves, bang on the table in frustration, roll up their sleeves, fidget, remove articles of clothing due to the heat, and stand by the open window for fresh air.

Lewis and PBD’s Producing Artistic Director, William Hayes, who also stars in the production, could have chosen a more “inclusive” version of this story. For instance, “Twelve Angry Jurors,” which includes characters of both sexes, carries basically the same story. But the decision to stage “Twelve Angry Men” with all white, male jurors was deliberate. Specifically, it shines a light on the fight for gender and racial equality today in America.

Truthfully, although this play takes place almost 70 years ago, in 1954, this divided group of jurors seems a microcosm of society today.

Like too many people do in 2022, “Twelve Angry Men’s” jurors hurl insults, belittle others, and nearly physically injure others. There are fight scenes, during which one or more jurors restrains others. Credit fight choreographer David A. Hyland for making it all look real, while keeping the actors safe. In fact, in PBD’s production, one juror appears to slightly shove another in anger. Further, the bitter sarcasm escaping these characters’ mouths cuts and penetrates, thanks to magnificent performances.

Of course, leading the way is Tom Wahl, as Juror #8. He is an architect and father of three. Wahl plays him with a believably upstanding, humane aura. Wahl’s #8 is an open-minded, thoughtful man. He is trying to get to the bottom of something, but not in an aggressive manner. However, when pushed too far, Wahl’s #8 is not beyond making a wisecrack remark.

Speaking of sarcasm, John Leonard Thompson as Juror #7 has it down to an art. This character is a wisecracking salesman who is more concerned about the New York Yankees game for which he has tickets that night.

Thompson’s sarcasm is deftly understated. Still, it stings just as much as from someone whose reactions are bigger.

While Thompson’s Juror #7 is understated, there is little that is subtle about Hayes’ bullying, adamant Juror #3. Hayes, with eyebrows that lower and almost disappear into his wide, dark eyes, leans forward in an aggressive posture. He is like an angry Pitbull bothered while eating his dinner and someone restraining him by a leash. Hayes’ loud, menacing voice, which sometimes reaches the level of shouting, is bound to strike fear in people.

There is a scene during which Juror #3 demonstrates on another juror how the defendant may have stabbed his father. As Hayes brandishes the knife and moves toward that juror, you fear that he will actually stab him.

Of all the characters, Juror #3, the owner of a courier business, undergoes the greatest change. As Hayes embodies him, if this character is an angry, large Pitbull for much of the play, he is a scared and shocked puppy toward the end. A realization by this juror almost brings him to his knees. At this point, his wide, blinking eyes are no longer threatening. Instead, they are windows to a shocked and deeply hurt soul. He can barely move.

By contrast, there is hardly anything intimidating about Juror #2, a bank teller. He is somewhat of a nebbish, and Michael McKeever, his face flushed red, carries a meek, nervous, and unpretentious air in the role. Juror #2 also undergoes a transformation. And McKeever segues seamlessly into a more confident man who stands up for himself.

If someone were to pick on Juror #2, there is a good chance that Juror #6 would defend him. He is a tough but principled house painter who objects to others, particularly the elderly, being abused.

As #6, Matthew W. Korinko’s strongest moment comes when he defends Juror #9, an elderly man, from verbal abuse by another juror. Korkinko speaks in a stern, threatening tone of voice. You really believe he will take action the next time someone picks on Juror #9 (a thoughtful, observant, and intelligent-seeming Dennis Creaghan).

Another quieter character is Juror #11. He is a European watchmaker. David Kwiat portrays him with a thoughtful and polite air. You keenly sense the man’s awe and respect for democratic values such as due process.

Bruce Linser lends a convincing impulsivity to Juror #12. He is an indecisive and easily distracted advertising executive.

Gary Cadwallader endows Juror #4 with an eloquence and conscientiousness. Both traits befit this analytical stock broker.

Jim Ballard is Juror #5. He grew up in a slum and objects to bigotry toward “slum kids.” Ballard lends him a sensitive air.

Cliff Goulet is also part of the cast. Specifically, he plays the guard as an alert individual who is vigilant.

Also, behind the scenes, sound designer Roger Arnold ensures we can understand every word. And his sound effects, such as an ominous rumbling and thunder, reinforce the show’s serious nature.

With high stakes and intense conflict, “Twelve Angry Men” is a riveting play. It fits in with PBD’s mission of producing theater to think about.

From the strengths and weaknesses of our justice system to considering how and why you feel a certain way, you will not leave with a shortage of things to talk and think about.

Chances are, this production is already among South Florida’s most talked about mountings this year.

PBD’s production of “Twelve Angry Men” runs through Dec. 29. Showtimes are 7:30 p.m. Wednesday and Thursday, 8 p.m. Friday and Saturday, and select Sundays at 7:30 p.m. Matinee performances are at 2 p.m. Wednesday, Saturday, and Sunday. Tickets are $84. Student tickets are available for $15, and anyone under 40 pays $40 (no additional fees) with a photo ID. Tickets for educators are half price with proper ID (other restrictions apply). To buy tickets, call the box office at (561) 514-4042, ext. 2, or buy tickets online 24 hours a day at palmbeachdramaworks.org. The theater is located at 201 Clematis St. in West Palm Beach.