Documentary play about doomed flight is upsetting, yet empowering 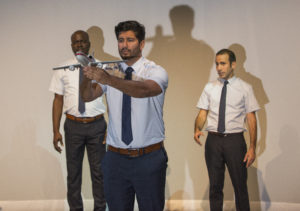 There we are – standing on top of an inverted plane, fire, wreckage all around us. I just want to run –

To which fellow survivor Ron Sheldon responds: But you don’t. You look back down at me –

Marshall: You’re urging more people to step into your hands and climb up. So – instead of running, I reach down and start to pull them up through the hole.

Sheldon: I boost them up –

Marshall: I lift them out.

Sheldon: We lift at least eight people out of there –

Of course, many might claim it’s a miracle that anybody survived the horrific crash landing that United Flight 232 made in Sioux City, Iowa.

But when you consider the fact that 184 of the 296 people on board survived, you may have a hard time accepting that as fact.

However, this was the case. And that alone makes the true story a compelling tale.

Yet what really warms hearts is that in the immediate aftermath of unspeakable, incomprehensible trauma, survivors were selfless.

Indeed, on that fateful day of July 19, 1989, these souls demonstrated people’s innate capacity for ingenuity and genuine concern for their fellow human beings.

Writer Vanessa Stalling highlights the human element of this tragically true tale in her documentary play. It’s a stage adaptation of Laurence Gonzales’ acclaimed book, Flight 232: A Story of Disaster and Survival.

And Southeast Florida audiences can experience the power and resiliency of the human spirit through a riveting co-production of Stalling’s play. The House Theatre of Chicago, together with the Adrienne Arsht Center for the Performing Arts of Miami-Dade County, are mounting a riveting production. It is running through May 19 in the Arsht Center’s intimate Carnival Studio Theater.

In fact, the audience’s close proximity to the actors and the stage helps make this production a particularly visceral theatrical experience. In addition, credit the actors mostly solid work, under adapter Stalling’s thoughtful direction. Also, kudos go out to sound designer and composer Steve Labedz for adding to the tension gripping the stage.

No doubt, Martin’s foreboding, darkly-tinged music creates an unsettling feeling that pervades the entire auditorium. And the actors’ rapid-fire dialogue conveys a sense of urgency suggesting that one second wasted could mean the difference between life and death.

Still, even perfect timing and flawless work from the flight attendants and pilots could not guarantee safety. Surely, as crippled as this aircraft was, nothing but a tragic ending seemed inevitable.

United Airlines Flight 232 began rather uneventfully. The jet took off without issue from Denver, bound eventually for Philadelphia. First, though, it headed to Chicago.

While the plane climbed to its cruising altitude, passengers kept themselves busy by, for example, listening to music. At the same time, flight attendants were serving the in-flight meal. Suddenly, a loud explosion pierced the quiet, followed by a vibration and a “shuddering of the airframe.”

“It sounds like a bomb going off,” a character notes.

“The plane is making sounds I’ve never heard before,” another remarks.

Further, the aircraft drops and shakes before the pilots can no longer control the plane. Eventually, it will land upside down and break into five sections.

To her credit, stage adapter Stalling finds the right balance between a technical explanation of what happened and the human element to the story.

When it comes to the technical explanation and terms, one of the actors holds a model of the aircraft. At the same time, he points out what went wrong. This allows us to visually comprehend the issues. Moreover, Stalling uses clear analogies and layman’s terms to further enhance our understanding of the problem.

Thankfully, the writer doesn’t overload the play with an overabundance of flight jargon. Furthermore, she doesn’t sugarcoat the tragedy and horrific nature of this unfortunately true story. Unquestionably, this is a deeply upsetting, practically unbearable play to experience. Fortunately, Stalling balances the grimness and darkness with heartwarming stories of survival, indomitable characters and their selflessness.

For example, an Air Force veteran formulated a plan to help a 16-year-old girl seated next to him to safely escape the airplane.

“I was trained in what we called the buddy system,” the man, Paul Olivier, tells us. “So now, I look at Nina as being my buddy and I have to find a way to help her out.”

Then, there was John Transue. He and a flight attendant held up a string of wires following the accident. This allowed others to could crawl through wreckage and out a giant hole. That hole was all that remained of the first-class compartment following the crash.

Speaking of the tragedy and this play, the piece brings awareness to issues related to airline safety. Also, the stage adaptation touchingly illustrates how people’s outlook on life and what’s most important can change in the wake of such an event. In addition, the playwright reminds us how people’s reactions to such real-life horror are often as different as the individuals themselves. Some remain in denial. Others break down. Helplessness and anger might infuse a few.

In regards to the latter feelings, irony might trigger them. In this case, the plane crash-landed amid darkness, thick smoke and debris. Yet, way above at the Sioux City airport shone a clear-blue, sunny sky. Meanwhile, tall, healthy stalks of corn surrounded the airport.

Such contrasts can symbolize the widely differing fates of the passengers. Yet, even for those who survived, it’s not as though all bleakness escaped. For some, the crash cast a pall over their existence; their lives would never be the same again.

For many, questions of “why,” “where” and “how” might linger. Specifically, these questions might include “Why did this have to happen?” “Where was God, or is there even one?” “How could he let this happen?” Why did some miraculously survive, while others died?”

For her part, Stalling offers no simple answers. And neither does a chaplain she includes in her play. Instead, this man suggests that we show compassion to and solidarity with those who are struggling and searching for answers. In particular, an arm around a shoulder, a hug or crying with someone can convey genuine concern and solidarity.

A sense of unity suffuses the play from the beginning. For instance, the entire company, serving as a sort of Greek Chorus, speaks in the first person when a character introduces him or herself. In other words, to illustrate, when flight attendant Jan Brown first speaks, the ensemble says in unison, “My name is Jan Brown. I’m the Chief Flight Attendant on United Flight 232.” In a way, this device reinforces a sense of togetherness among all aboard the doomed aircraft.

As an ensemble, the actors skillfully convey a sense of urgency and panic by nailing the rapid-fire dialogue.

Individually, some actors are stronger than others. Generally, the cast proves adept at authentically conveying a variety of emotions and segueing seamlessly between them. However, one main weakness is that a few performers oddly underplay emotions during obviously upsetting scenes. This is especially true when a cast member could enhance his or her portrayal by appearing to cry.

Another issue with this production, at least on opening night, was the timing of light cues. Moreover, the lighting could vary more in terms of color.

On the other hand, an effect which suggests the actual crash is appropriately disquieting and harsh, without reverting to gore.

Scenic designer John Musial opts for minimalism. Instead of a detailed design, he has opted for a row of chairs, which the actors re-arrange into various configurations. This adds variety. The colors black and grey dominate the set. Certainly, they are appropriate for a play as dark as this one. But again, there is contrast, which helps communicate some of the irony of this day. To be specific, Paul Deziel’s projections include a blue sky with white clouds, which hovered overhead at the Sioux City airport.

The play’s last words, against that backdrop, are: “It’s beautiful to be alive.”

Indeed, they are words we can so easily forget.

United Flight 232 runs through May 19 in the Adrienne Arsht Center’s Carnival Studio Theatre. For ticket prices and showtimes, visit arshtcenter.org or call (305) 949-6722.