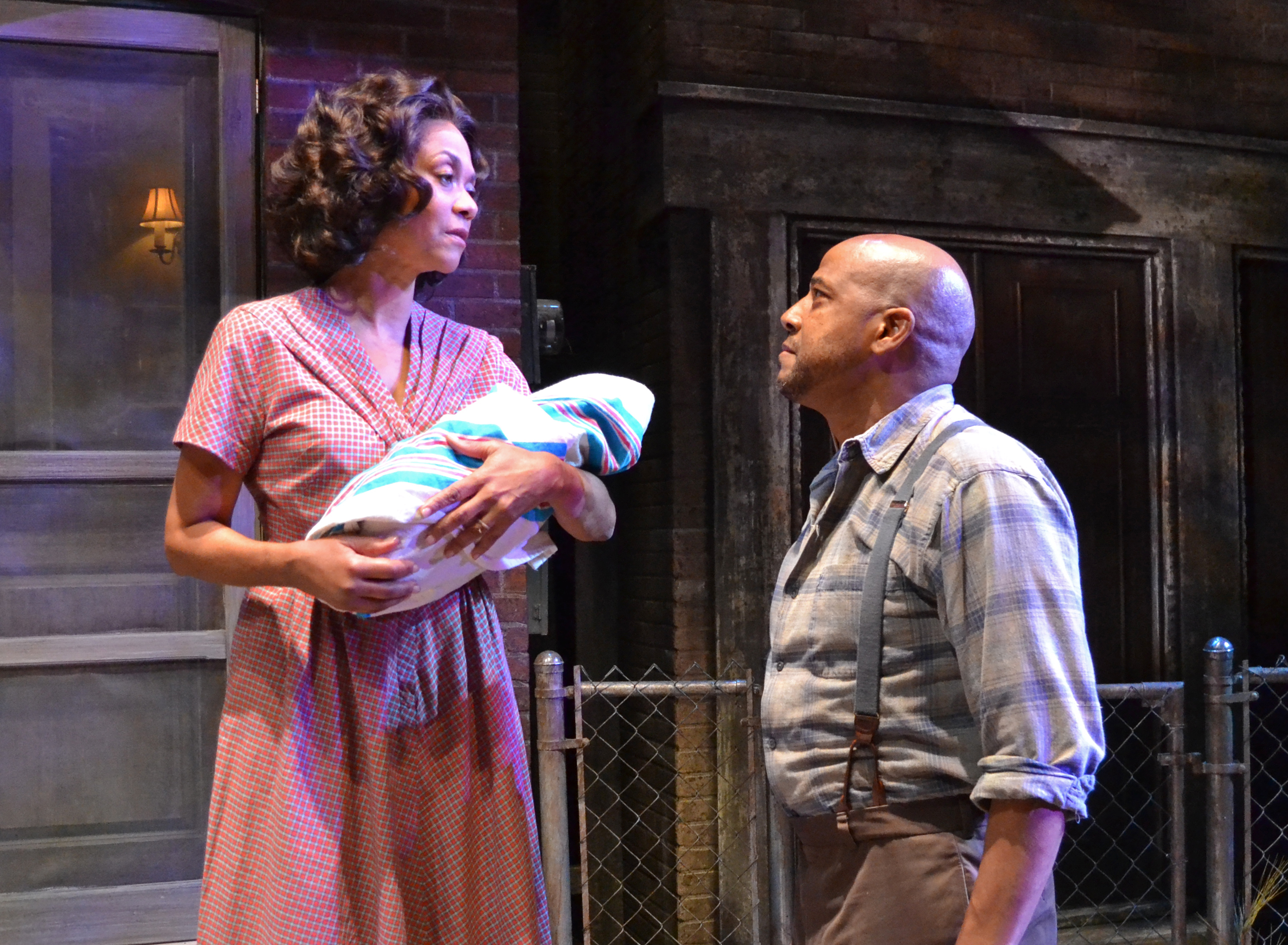 But there is another storm raging throughout Dramaworks’ deft production, which will no doubt stir a variety of emotions.

No question, Purry excels in this iconic role. Such actors as James Earl Jones and Denzel Washington have inhabited the part, the latter recently on film. And to his credit, Purry does not mimic those stars’ performances.

Maxson is a tragic figure living in the Hill District of 1950s Pittsburgh (Wilson’s birthplace).

True, Maxson is not exactly the easiest character in literature to like. After all, he is egotistical, stubborn and short-tempered.

Even so, Purry makes these and more traits arise organically from Maxson’s past and current circumstances. These tragic flaws seem as much a part of him as his limbs and organs. As a result, Maxson never comes across as someone trying to be spiteful for spite’s sake.

The somewhat bulky Purry, his shaved head hidden by a hat, finds the humanity and complexity within Maxson. When it’s time to convey this embittered former Negro League baseball star’s pride, Purry repeatedly pounds his chest, reinforcing that trait.

Meanwhile, this gifted actor is equally at ease imbuing Maxson with playfulness and a seemingly carefree aura. This is especially true during Maxson’s casual conversations with his pal, Jim Bono (a devoted, earnest John Archie).

Purry’s acting is, at times, intimate and touching. This is especially the case during tender scenes with his long-suffering, yet faithful wife, Rose (a terrific Karen Stephens).

During other times, Purry’s portrayal is large in scale. In fact, one might say it is a towering performance, Shakespearean in scale. But whatever emotion the actor conveys, it’s always credible. Emotions and actions seem spontaneous.

That is the case with this entire cast’s work. However, ironically, sometimes words can be difficult to decipher when the performers are talking loud.

For Wilson aficionados, Fences needs no introduction. But for the casual theatergoer, it helps to understand the story and characters.

The play is part of Wilson’s “Pittsburgh Cycle” or “American Century Cycle.” In one of theater’s highest achievements, Wilson wrote one play for each of the 20th century’s decades, chronicling the African American experience in each. Except for one work, Ma Rainey’s Black Bottom, depicting black life in the 1920s and set in Chicago, all cycle plays are set in Pittsburgh’s low-class Hill District.

Fences depicts black life in the 1950s, specifically 1957. The piece netted Wilson the Pulitzer Prize for drama as was as a Tony Award for best play.

Throughout a good part of his life, racism has placed obstacles, or metaphorical “fences” in Maxson’s path. For instance, he could not become a Major League baseball player due to his skin color. But while this was a “fence” which he was unable to scale, Maxson was a Negro League Baseball star.

Despite his successes, the man remains embittered. He is angry about, among other things, Major League officials turning him down. And so, Maxson dismisses the achievements of black Major League stars accepted into the league following the breaking of the color barrier.

Maxson, a garbage collector and former thief who spent time in prison, takes out his frustrations primarily on his teenage son, Cory (Jovon Jacobs). The teen, despite his color, has opportunities his father never had. That is primarily because the younger Maxson is growing up during a different time period. Add the generational gap between father and son, and you have seeds which can sprout jealousy and even resentment.

To say that Troy parents Cory with “tough love” would be an understatement. Rather, it seems father never liked son and vice-versa.

Against this tense backdrop, and a shocking revelation Troy makes to his wife of 18 years, Rose, the dysfunctional, quickly fracturing Maxson family is teetering. Wilson, in his signature poetic style, touches on many themes in this sprawling play. They include love, dealing with mortality, commitment, disappointment, responsibility, duty, honor, betrayal and father-son relationships.

In his cycle, several of Wilson’s plays center on the spiritual, ritualistic aspects of the African American past. However, realism is predominant in the highly symbolic Fences. It is specific to African American culture, yet universal in its themes. Certainly, you don’t have to be black or even familiar with the other cycle plays to identify with the ideas presented in Fences. Indeed, this is a play that can stand by itself. You can easily see yourself or someone you know through these characters.

Surely, some will recognize herself or someone she knows through Rose. And as Stephens expertly embodies her, how could you not? The actor lends Rose a charming and loving demeanor. It is one that can easily explain why Troy chose to marry her and remain married to Rose for nearly two decades. Stephens’ Rose sings sweetly while hanging laundry on a clothes line. Further, when she witnesses one of her husband’s foibles, she looks at him with a wry, knowing and amusing glance. It’s one that clearly communicates that, through 18 years of marital bliss, Rose has come to know Troy as though he were her identical twin sibling.

But Rose is a difficult character to portray. In fact, it’s easy to envision an actor playing Troy overshadowing her. Fortunately, that is not the case in Dramaworks’ production, under producing artistic director William Hayes’ astute, sensitive and detailed direction.

A performer playing Rose must convincingly convey a delicate quality. In addition, she must make the character assertive. The latter quality keeps Rose from being merely a pushover for Troy who, despite his love for her, keeps referring to her as “woman.”

Fortunately, Stephens endows Rose with backbone. This helps make her a multi-dimensional character.

In addition, Rose must suddenly, yet seamlessly segue from soft-spoken devotion to shocked dismay and anger. We never sense this change coming under Stephens’ portrayal. But when it does come, we practically feel as though we’re watching two different people. The consternation Stephens conveys after Troy’s unexpected revelation is difficult to watch. The pain and teary-eyed expression suddenly etched into Stephens’ heretofore sunny face and the bitterness escaping her voice will likely leave you crying and gasping. Moreover, your protective instincts might kick in during a scene in which Troy becomes physical with Rose.

He almost even attacks death, which stalks him.

In the play, Wilson portrays death as a live character, whom Troy refers to as “Mr. Death.” He “speaks” to the grim reaper, essentially donning a mask of bravado as Troy, in a cocky, competitive tone of voice, dares death to catch up with him. Troy’s dare foreshadows the tragic ending. In addition, it illustrates another way in which Wilson uses the structure of a fence as a symbol with multiple meanings. For instance, it stands for a protective device. Specifically, it’s one to keep certain people in and others out. That includes death.

Death personified may be among Troy’s biggest opponents, but it’s hardly his only. As a matter of fact, Troy seems to be fighting everyone. After all, he’s an embittered battler, turned hard and cold, obstinate and vengeful from past wounds of racism.
And as Purry embodies him, this proud, arrogant Troy is like a wild animal. He leans in aggressively toward his potential prey.

Also, Purry’s Troy is outsized, yet believable. When the performer speaks, he uses his entire body, gesturing often. Troy is not only physically a big man, but one with a big ego and personality And again, to his credit, Purry demonstrates this without overshadowing the other characters.

They include Cory, played by the immensely talented Jovon Jacobs. He recently mesmerized as Walter Lee in New City Players’ powerful production of A Raisin in the Sun.

Here, Jacobs invests Cory with a skittishness, skillfully demonstrating how afraid this young man is of his father. Jacobs also convinces us he’s a teenager, endowing Cory with a recognizable impulsiveness.

Meanwhile, Warren Jackson, as Troy’s other son, Lyons, provides contrast to his brother. He comes across as an affable, happy, more controlled young man with an irresponsible streak.

John Archie invests family friend Bono with a devoted air, but also a fun-loving personality and scratchy voice that might call to mind a sitcom character. But when it comes time for Bono to turn serious, Archie makes him sincerely sympathetic and a true-to-the-core friend.

Troy’s brother, Gabriel, is equally well-meaning, however ill he has become since suffering a brain injury while fighting a war. In the role, Bryant Bentley essentially acts silly as the character, who believes he is the archangel Gabriel, carrying a trumpet with him wherever he goes. As Bentley portrays him, his laughs are the equivalent of shrieks and he yells more than he speaks. One might argue that the performer overdoes it a bit. Then again, until you’ve met someone injured as Gabriel has been, it’s hard to judge.

One production aspect that needs work is the lighting. George Jackson’s design is too homogeneous. The designer’s use of blue is appropriate, symbolizing the Blues, so prevalent in Wilson’s plays. Also, the color can symbolize the play’s more somber scenes. However, the use of this and other hues are too constant. Surely, implementing red would reinforce passionate and intense scenes. On the plus side, Jackson softens the lighting during more intimate scenes. And the lighting during the final sequence is appropriately otherworldly.

And Brian O’Keefe’s costumes are character-appropriate.

Then again, even if you don’t understand every word, Dramaworks’ rendition of Fences is compelling. You can sense what these characters are feeling from their vivid body language.

Director Hayes doesn’t mess with Wilson’s classic, accessible play. He obviously trusts the material enough to leave it intact, letting this classic of the American stage speak to each of us in different ways.

An added bonus is Dramaworks’ semi-circular stage which nearly extends into the audience. This, coupled with an intimate auditorium, draws us into the world of the play.

It is this type of environment which can offer the most visceral, powerful kind of theatrical experience. And with Fences, Dramaworks delivers.

Palm Beach Dramaworks’ production of Fences runs through April 21 at the company’s West Palm Beach theater, 201 Clematis St. Showtimes are 2 p.m. Wednesday, Saturday and Sunday as well as 7:30 p.m. Wednesday, Thursday and some Sunday nights. Friday  performances take place at 8 p.m., and Saturday showings are at 2 p.m. and 8 p.m. Talk backs are Sunday nights, April 7 and April 14. Tickets are $75, with discounts available. For more information, visit www.palmbeachdramaworks.org. or call (561) 514-4042 ext. 2. 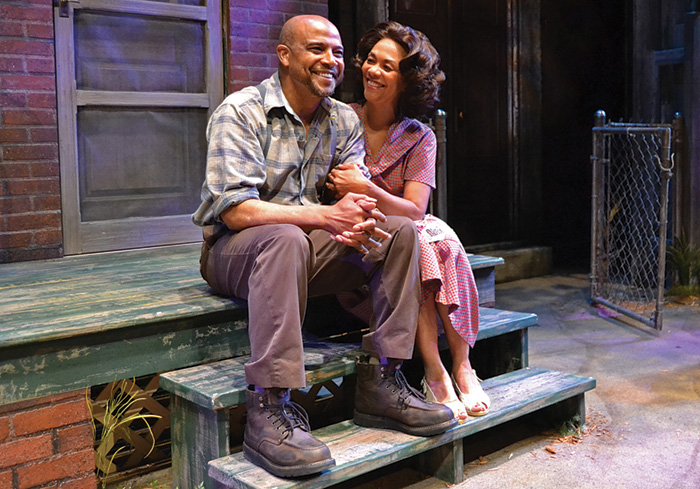