A moving, scary ‘A Christmas Carol’ is streaming 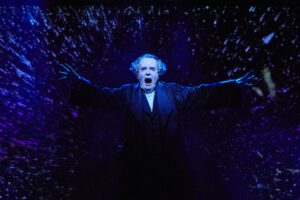 Ebenezer Scrooge (Jefferson Mays) looks as though he’s freefalling in a streaming version of Charles Dickens’ classic A Christmas Carol.

At times, one of the newest adaptations of A Christmas Carol sounds and looks more like a horror film than an adaptation of a Charles Dickens classic.

But by emphasizing the horror aspect of Dickens’ ghostly tale of redemption on Christmas Eve in 1800’s London, Tony-winning director Michael Arden makes the adaptation reflect the world in which we live. Certainly, living during a pandemic is frightening for many. Indeed, merely picking up a newspaper can be enough to cause shivering.

Pardon the cliché, but misery loves company. And so, when we witness Ebenezer Scrooge shivering at the sight of a ghost, we feel we’re not alone in our frightful feelings.

Of course, Arden ensures that we feel unsettled. For instance, thanks to treacherous shadows, a jet-black backdrop, sounds of something slamming, echoing voices, creeping fog, and an opening sequence that might suggest that your death is imminent, you may feel as though you’re catching the latest Stephen King film. But wisely, Arden balances dark, scary scenes with lighter, more colorful ones. Such light, of course, comes in the form of Scrooge’s transformation. Specifically, he changes from a sour old miser to a happy, benevolent being. And make no mistake, Arden and star Jefferson Mays ensure that we fully experience the transformed Scrooge as much as the miserly Scrooge.

Audiences all over can and should experience this adaptation, a filmed version of Geffen Playhouse’s 2018 production of A Christmas Carol. Mays, his wife, Susan Lyons, and Arden adapted it from Dickens’ classic novella. A crew filmed the production for on-demand streaming. It will continue through early January. The production is, at turns, riveting, frightening, disturbing, lighthearted, and moving.

Speaking of moving, you’re bound to feel that Mays’ Scrooge has undergone an emotional journey. But, you’ll also sense that he’s taken you on a physical journey. For instance, thanks to the technical team’s masterful special effects, at one point it looks as though Mays is flying through a snowy sky.

While the special effects are sure to astound you, so, too, will Mays’ performance. After all, he convincingly portrays more than 50 characters. And he transitions seamlessly from one to another.’

Now, one-performer versions of A Christmas Carol are not something new. For example, not too long ago, Sir Patrick Stewart brought his one-person version of Dickens’ classic to New York City. He portrayed more than 40 characters. Also, Dickens’ great, great-grandson, Gerald Charles Dickens, has performed in a one-person version.

But while others have portrayed multiple characters in one-person versions of A Christmas Carol, that hardly makes the practice unoriginal. For one thing, it presents quite an acting challenge. Fortunately for Mays and us, the Tony-Award winner is experienced and skillful at portraying multiple characters. For instance, he received a Tony nomination for playing nine individuals in the Broadway musical, A Gentleman’s Guide to Love & Murder. Also, he won a Tony for inhabiting 40 people in the play, I Am My Own Wife.

Mays is adept at seemingly effortlessly and quickly adjusting his voice, posture, and manner to play a variety of characters. Here, they include Scrooge, the narrator, an eager and excited young woman in the Cratchit family, and the ominous, menacing ghost of Jacob Marley, Scrooge’s late business partner. Further, Mays wisely avoids turning the characters into caricatures. Instead, they feel like real, relatable people, warts and all.  You might find it hard to take your eyes off Mays, with the energy, intensity, and familiarity that he brings to Dickens’ tale.

The performer gives Scrooge enough irritability and apathy for us to see some of the character in ourselves. (Surely, part of A Christmas Carol’s staying power lies in the fact that we all have some Scrooge within us). Mays also nails Scrooge’s sunniness and even giddiness at the end. That is when the character is so happy, he skips around like a carefree child in a toy store.

One might argue that this adaptation adheres too closely to Dickens’ novella. Indeed, Mays acts out or narrates many passages directly from the source material. True, but by just reading the book, you don’t get to experience a supremely talented performer inhabiting more than 50 characters. And besides, in what we can certainly call a nontraditional year, it’s comforting to hold on to some traditions. Reading and enacting A Christmas Carol out loud is one of them. In fact, Dickens himself, at least once and perhaps many more times, read his novella out loud. This was also a tradition in Mays’ childhood home. Each year, his father would read the novella with “clarity and humanity” as Mays recalls. Meanwhile, his mother, “eyes ablaze” would transform into the characters.

Today, Mays is reading and enacting the story for us. But while he deserves all the praise that you can throw his way, others are due plaudits as well. For instance, Ben Stanton’s lighting deftly captures mood, provides focus, and accentuates intense moments. For much of the production, Mays stands in pitch blackness, save for candlelight or a fireplace. This reinforces the story’s darkness, through which we must pass to fully appreciate and celebrate a transformed, redeemed Scrooge.

Mays never changes costumes. Instead, throughout, he sports an all-black outfit, a perfect fit for Scrooge’s dark nature. Dane Laffrey designed the outfit, which includes the period detail of a pocket watch. In addition, Laffrey designed the scenery. Mostly, there’s little more than desks, chairs, and a fireplace. However, there’s at least one gorgeous scene that captures the look of Christmas, with green and red decorations, as well as reindeer. The scene not only looks great, but fits Dickens’ description of the atmosphere around the Ghost of Christmas Present.

While it’s hard to find fault with this production, the ending is curious. We see Scrooge standing in a cemetery before he seems to vanish into the air, followed by the credits rolling. The ending is hardly about death; it’s full of life. It’s not a spoiler to say that Scrooge decides to live life to the fullest, while helping others. What’s he doing in a graveyard? It’s a question with which you might find yourself wrestling. However, like it has done for many years, A Christmas Carol will also leave you celebrating humans’ capacity for redemption, change, and with a desire to help those less fortunate. Certainly, the tale will leave you pining for the time when being together with others is possible again.

Tickets purchased via AChristmasCarolLive.com will automatically benefit local community theatres based on ZIP code. Proceeds from tickets purchased outside of the U.S. or non-affiliated ZIP will be divided and shared with the partner theatres.

‘Gifts’ focuses on the power of story during dark moments