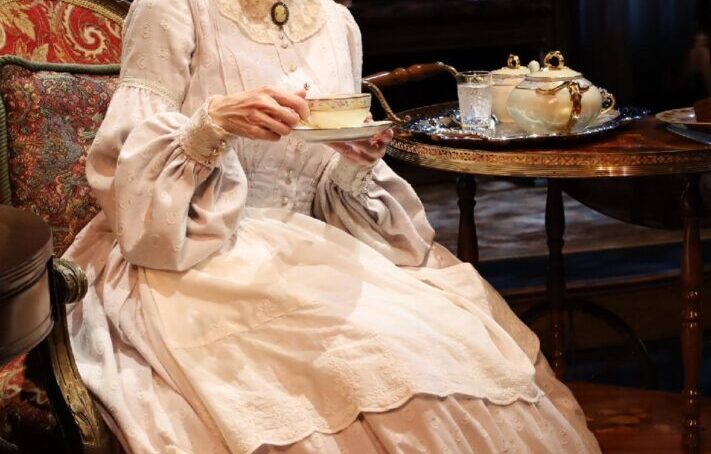 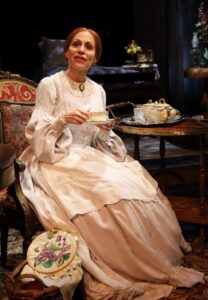 Photo courtesy of Actors’ Playhouse at the Miracle Theatre and Palm Beach Dramaworks.

The streaming co-production of The Belle of Amherst was a “breath of fresh air for all of us who miss going to the theatre,” PBD board chair Louise Snyder said. In the above photo, Margery Lowe appears as Emily Dickinson.

Palm Beach Dramaworks’ (PBD) patrons should be able to breathe easier knowing that COVID-related safety and sanitary measures will be in place when they return to the theater in the fall.

However, those measures come with a cost. As a matter of fact, the price tag will be close to $1 million, PBD Managing Director Sue Ellen Beryl said. Therefore, company leaders hope the community will donate toward that purpose, through an effort PBD is calling the “Take a Deep Breath Campaign.” PBD will rely almost solely on donations to pay for the work.

Among other things, PBD is installing a new HVAC system throughout the building. It complies with the latest safety guidelines recommended by the CDC. They include the use of UV light, bi-polar ionization, and specialized high quality air filters.

Soon, PBD’s building will shut down and the few employees who’ve been working at the theater during the last year will work remotely. That way, work can begin on the new HVAC system.

“The building is essentially going to be torn up,” reads an e-mail to PBD patrons. “The one bright spot is that very little will have to be touched in the main auditorium. But the rest of the building will be one big construction site.”

Workers will wrap-up the effort in late August, Beryl said. She added, “We need to be back in the theater (on) Sept. 1 so we can mount the first production.”

Specifically, she’s referring to Almost, Maine. That play will open the 2021-22 season on Oct. 15. To see the full lineup of shows, visit https://theatricalmusings.com/reviews-by-theater/palm-beach-dramaworks/palm-beach-dramaworks-to-re-open-in-october-with-almost-maine.

But before PBD re-opens for live and in-person productions, the theater will become a hive of a different kind of activity. For instance, workers will take down ceilings and remove ducts.

“Some of that work has already begun,” an e-mail to PBD patrons reads. “And it’s not an exaggeration to say the place is a mess.”

Currently, PBD has five air conditioner units. One of them is for the lobby and the second floor, while another cools the auditorium. The three smaller units serve the remainder of the building.

“All need to be replaced in order to ensure proper filtration and meet the new safety standards,” the e-mail reads. It adds that an engineer drew up plans for the new system. The target price was $350,000. But then a general contractor put out the engineer’s drawings for bids.

Of course, that price could be even higher if the project requires additional work, Beryl said.

During the past year, PBD has presented about 75 free online programs, “with many more to come through August,” company leaders said. “The only time we’ve charged for tickets was when we teamed with Actors’ Playhouse on the streaming production of The Belle of Amherst.” That production raked in funds for both companies. In fact, except for The Belle of Amherst, PBD has gone without revenue from ticket sales since February, 2020.

Beryl said that money to pay for PBD’s free online programs came from donations and reserve funds. She added that PBD runs on a more than $3 million budget. And half of that comes annually from donations. This has allowed PBD to keep ticket prices affordable, Beryl said. She added she’s particularly pleased that donors in 2020 matched their donation amounts from 2019 — even though PBD, like almost every theater company, didn’t present live, in-person productions after the pandemic started.

In addition to installing a new HVAC system, work at PBD will include upgrading facilities and ticketing procedures to allow for as much of a touch-free patron experience as possible. Also, the company will add numerous sanitation stations, and increase cleaning frequency. That includes disinfectant spraying of the audience chamber before and after every performance.

“The Belle of Amherst was a breath of fresh air for all of us who miss going to the theatre,” said Louise Snyder, chairwoman of PBD’s board of directors. “It was a beautiful production that met Dramaworks’ high standards, but it lacked one thing: an audience. In order to ensure everyone’s safety and peace of mind when they return to the theatre, PBD’s new practices and procedures are essential – and costly. So now we’re asking patrons to contribute whatever you can to this capital campaign, knowing that when you come to see a show at PBD, you’ll not only be able to ‘take a deep breath,’ but (know that) you’ve helped make these new protocols a reality.”

To donate toward the Take a Deep Breath campaign, go to palmbeachdramaworks.org/donate. Or, make a check payable to Palm Beach Dramaworks, and mail it to 201 Clematis St. West Palm Beach, Fla. 33401. You can also call Director of Development Carla Bryant at (561) 514-4042 ext. 106.

“We’re hoping these new protocols will put everyone’s mind at ease so that they can just delight in being back in the theatre and enjoy this great lineup of plays, without worrying about the air they breathe,” said Producing Artistic Director William Hayes. “However, we also recognize that a segment of our patrons might be wary about sitting in a full theatre and won’t be quite ready to return. If that’s the case, we may have to reduce the run of each play this coming season by a week. But we’re keeping the closing date flexible, depending on the response.”