GableStage selects its next leader 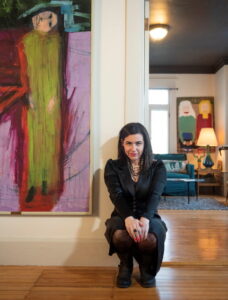 During her time as associate director of Florida Repertory Theatre in Ft. Myers, Bari Newport heard about another theater company down south. It was a company that was consistently doing work that everyone else admired, Newport recalled hearing.

“What was this place, and how can I be a part of it?” Newport thought.

And today, she is the Producing Artistic Director of that company. Specifically, it is GableStage in Coral Gables.

“Bari has the rare combination of artistic ability and business skills to run a theater and lead our growth efforts,’’ GableStage’s board said in a statement. “We wanted someone who would address the diversity of Miami, have their own voice and creative style, and be a leader who engages the community, board, company, staff and volunteers. Bari will lead us into the future.’’

For the past nine-and-a-half years, Newport has led the Penobscot Theatre Company in Bangor, Maine, author Stephen King’s hometown. Before that, Newport served as an artistic associate at the Alliance Theatre in Atlanta, artistic associate/literary manager at the Pasadena Playhouse, associate producer at Horizon Theater and associate director of Florida Repertory Theatre.

“It’s a great privilege and honor to walk in Joe Adler’s footsteps, and I intend to do my best to build on his incredible legacy of daring excellence, which is how I know GableStage,” Newport said. “I know it for its bold, quality, adventuresome storytelling.”

But during the past year, GableStage, like other organizations, had to weather some tough times.

“Our theater was shuttered one year ago (due to the pandemic), hours before opening night for Arthur Miller’s brilliant play, ‘The Price,’ GableStage board chairman and president Steven Weinger wrote in a letter to members and subscribers. “One month later, we lost our indescribably charismatic and brilliant Joseph Adler. That’s when I reread Dylan Thomas’ poem ‘Do Not Go Gentle into that Good Night,’ and got to work with our loyal GableStage Board to ensure the future of GableStage. I am excited to announce, loudly, ‘MISSION ACCOMPLISHED!’”

Weinger said that GableStage is entering a new phase.

“We are artistically and financially ready to take on the world,” he said. “We are embracing change while maintaining our core values of uncompromising quality, artistic integrity, service to our community, and a little bit of fun as well.”

Apparently, we need only wait until the fall to return in person to GableStage. In an interview with www.floridatheatreonstage.com, Bari said,  “I’m going to try and announce something in June, and I intend to have a reopening event in October… hopefully looking towards a season starting in November.”

To watch a video in which Newport introduces herself, visit https://www.youtube.com/watch?v=R4cy1Pjy3FE.

And for more information about GableStage, visit http://www.gablestage.org.