GableStage seeks to engage through multi-media 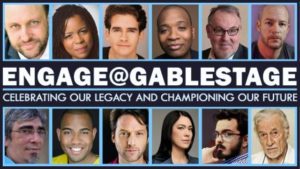 While GableStage has decided to cancel the remainder of its 2019-20 season of live theater due to COVID-19, the company’s current endeavor might offer snapshots of what theater could, at least partially, look like in a post-pandemic world.

Specifically, to replace the remainder of the 2019-20 season, ENGAGE@GableStage has commissioned 12 artists to produce nine projects that take the shape of short-form digital works within any artistic discipline. The projects comprise a new season of weekly world premiere productions to debut over the next two months.

Grantee projects will receive digital world premiere productions at 7 p.m. every Friday, from July 31- Sept. 25. You can see them exclusively on GableStage’s website, gablestage.org. There is no cost to view the productions, which will remain posted infinitely on the website.

GableStage officials selected the artists and their projects “after a very competitive application period receiving innovative and versatile projects from artists throughout the country,” notes a press release. “The selected projects exemplify GableStage’s values of thought-provoking and engaging entertainment that also highlight a diverse group of artists, voices, and stories.”

The pieces the artists created range from a photo montage set to a newly-created musical score to a combined short Sci-Fi film and digital theater piece to productions featuring interdisciplinary performances.

“Be assured that GableStage remains a viable, vibrant South Florida arts organization that will continue to entertain and educate long into the future. We look forward to welcoming our patrons back to live theater when the time is right,” GableStage Board President Steven M. Weinger wrote in a prepared statement.

Meanwhile, descriptions about each project and information about the artists follow.

Corey earned his Bachelor’s and Master’s degree in bassoon performance at the University of Miami. He is a member of The Symphonia. Also, Corey is the resident sound designer at GableStage. There, he collaborated on more than 80 plays with the late Joseph Adler. In addition, Corey is the resident sound designer for Theatre Lab and Zoetic Stage. Corey has earned Carbonell Awards for his designs of The Pillowman, Broadsword, Talk Radio, Blasted, The Birds, The Mountaintop, and The Night of the Iguana.

By day, Corey is the CEO of Insight for the Blind in Fort Lauderdale. This is a 45-year-old charity devoted to recording books, magazines, and other accessible media for the blind and print disabled.

Schiavone is the resident photographer at GableStage. Also, he’s appeared in a half-dozen plays, his final collaboration with Adler being Arthur Miller’s The Price. Further, Schiavone has appeared in several films. They include Mordecai, opposite Judd Hirsch; Death of Fools, a film by Ismael Gomez that has made it to Amazon; and the comedy film, Chateau Vato, which premiered on March 11.

When he’s not performing, Rowley is the artistic director of Hued Songs, a performance series. It explores and celebrates black history through the lens of black music and artists. Since their inception, Hued Songs has created and produced interdisciplinary performances throughout South Florida. Venues have included the Norton Museum of Art, Little Haiti Cultural Center, ArtServe, and the Overtown Performing Arts Center.  Through his work, Rowley seeks to amplify black narratives through music. Further, this artist tries to be a conduit for accessible arts across a multi-cultural platform.

Urrutia is a recent graduate of FIU Theater’s BFA Acting program. He actively works to better understand the relationship between the actor and the audience. Recently, Urrutia directed Stein Time, three plays by Gertrude Stein. Also, he directed Post Military Plays, a group of one-act plays. This fall, Urrutia’s one-person play, Chainmail, based on the life of Gary Gygax, will be streamed.

Yawney’s writing has appeared in Theater Week, Propaganda, Playgirl, OutTraveler and OFF, as well as in the book, Michael Chekhov: Critical Issues, Reflections, Dreams. Yawney holds a BFA from the Experimental Theater Wing of New York University and an MFA in Directing from Columbia University. For more information, visit www.michaelyawney.com.

Jessica Farr is a writer, actor, performer, and director from Miami. She is an alumnus of New World School of the Arts, Fordham University, and Moscow Art Theatre (MXAT). Farr has developed original programming for film, television, stage, and radio, including Comedy Central’s South Beach Comedy Festival. Also, Farr is a recent TCG Conference Artist Grantee. She received the 2017-2019 Playwriting Development Program grant. Through it,  she developed two new plays at The Playwrights’ Center in Minneapolis. Farr has performed standup at The Ice House, Flappers, and The Comedy Store in Los Angeles, The Improv in Miami, and in live sketches at UCB. She is the co-creator and co-host of the podcast Worst Place On Earth, an original storytelling series based on Florida headlines. For more information, visit www.jessicafarr.com.

Caleb Scott is a writer and actor. His plays and performance pieces have graced stages  in New York City and around the country. They include Classic Stage Company, HERE Arts Center, La MaMa ETC, the Bootleg Theater in Los Angeles, Sandrell Rivers Theater in Miami and the Wooster Group’s Performing Garage. As an actor, Scott has appeared in numerous roles onstage as well as in dozens of commercials, television shows, and films. His writing has appeared in numerous literary magazines and journals. They include The Bellevue Literary Review, Nashville Review, Typishly Literary Journal, Public Poetry Anthology, Swamp Ape Review, Grist, and December Magazine. PowerHouse Books in New York published Scott’s first book, U.F.O., in 2006.

Scott’s films have screened in festivals all over the world, including the Toronto International Film Festival, Raindance in London, Cinequest in San Jose, Palm Springs International Film Festival, and Aesthetica in York, UK. Scott has been a Finalist for an Academy of Motion Pictures Nicholl Fellowship. In addition, Scott has received the Silver Palm and Carbonell Award for his work in South Florida theater. Also, Scott is a nominee for Best Actor and Best Writer by the Kinsale Shark Awards in the UK. Further, judges have selected Scott’s plays as Finalists for the Playwrights Foundation Bay Area Playwrights Festival and the Eugene O’Neill Theater’s National Playwrights Conference. Scott is a graduate of Dartmouth College. He received a Dartmouth Senior Fellowship in Writing. Scott is writing and producing a storytelling podcast, Worst Place On Earth, inspired by the infamous Florida-Man headlines. Scott lives in Miami, Florida. For more information, visit www.calebscott.tv.

Hernandez is a Miami- and NYC-based actor and performing artist. His theater background lends a foundation to his approach to performance and storytelling. Hernandez has worked professionally on stage, in front of the camera, and in immersive interactive spaces. As a gay Latino performer, Hernandez is interested in creating content and telling stories that highlight the queer and Latinx experience.

The piece is a 10-minute segment of Finley’s yet-to-be-produced one-woman show American Burning. In this multi-media performance, Finley combines music, film, spoken word poetry, acting, symbolic movement, and innovative costuming. These elements create a visceral exploration of America’s obsession with violence, munitions, and the price of our “freedom.”

Finley is a South Florida-based actor, director, and writer. Her work includes stage, film and performance art. Most recently, Finley appeared on stage as Lena in Mad Cow Theatre’s production of Boseman and Lena. Since the start of the pandemic, Finley has remained active. She has performed in several online “staged” readings. They include Play Development Project’s Touch the Moon by Arianna Rose (appearing as Becca), and Mad Cow Theatre’s Science Play Festival by several playwrights (appearing as The Griot and Jen) among others.

She is currently awaiting continued filming of her lead role in the pilot of Motherless, a dramatic series. Finley’s professional directing career began in 2006 with Alliance Theatre Lab’s production of Lee Blessing’s Down the Road. Since then, she has directed numerous productions on stage and on camera. They include Finley’s most recent productions, Venus by Susan Lori Parks at The African Heritage Cultural Arts Center, For Colored Girls Who’ve Considered Suicide When the Rainbow is Enough by Ntozake Shange at The Pompano Beach Cultural Arts Center, and the pilot episode of The Jaxons. The latter is a family-friendly sitcom produced by Pinnacle Productions. Since the pandemic, Finley has also directed Judge Mablean Said, by Darius Daughtry via Zoom for New City Players.

As a founding member of the poetry performance troupe, Chaos Theory, Finley co-wrote Unbroken, the group’s full-length performance piece which premiered at Mainstage Playhouse in 2016. She has also served as a screenwriter on several projects for 1310 Bandits and Pinnacle Productions. Critics have described Finley’s work as bold, provocative, entertaining, and thought-provoking.

Reboot by Gregg Weiner makes its debut on Sept. 11. The piece is a dark and funny look at one man’s mid-life crisis in a time when exponential changes make him question his own sanity.  Weiner has been a professional actor for more than 20 years. He has garnered critical acclaim for his time in South Florida Theatre. Specifically, he performed in 17 shows at GableStage, and took home Carbonnells for his work in Fifty Words and Farragut North as well as a Best of New Times for his portrayal of Mark Rothko in Red, also at GableStage.

Weiner has appeared in numerous commercials, TV shows such as It’s Always Sunny in Philadelphia and Magic City. Also, Weiner has made it to the big screen a few times, appearing in films such as Transporter 2, War Dogs, and Pain and Gain.

McPhillamy was born in the UK to Australian parents and trained in London at The Central School. New York work includes: Hangmen, The Ferryman, Ink, (Broadway), London Assurance, The Seafarer (The Irish Rep), The Importance of Being Earnest (Roundabout), House and Garden (Manhattan Theatre Club), Woman in Black and Waiting in the Wings (Broadway).

In the UK, McPhillamy has worked in The National Theatre, in the West End, at the Edinburgh Festival and on British TV. Writing includes contributions to BBC Radio, published as The Tree House and Other Stories, also: An Actor Walks into China, and Actor Blog Plus. McPhillamy has acted, and guest directed in Australia, New Zealand, and China.

McPhillamy’s first professional engagement was to play a solo version of Shakespeare’s Henry V. In it, he played about 40,000 parts, including both the French and English armies at the battle of Agincourt. While still a young man, this artist became interested in astrology. In fact, he would have been an astronomer if he could have understood more than three pages of “Quantum Physics For Dummies.” He tried to read it when he played the great Danish physicist, Neils Bohr. Both Shakespeare and what The Bard calls “The Skyey Influences” have remained lifelong interests.

1/1000 by Joshua Jean-Baptiste is a short Sci-Fi film and digital theater piece that follows Melvin. He’s a depressed tech worker whose existential and nihilist thoughts have reached a fever pitch. That is due to his isolation amidst a pandemic and racial tensions. After struggling to give proper attention to his job, family and relationship, he receives a mysterious device. It gives him access to a mystical menu that can adjust various statistics in his life. This sparks a chaotic shift in his reality, for better and for worse.

Jean-Baptiste is an actor, writer, public speaking coach, and Miami native based in Los Angeles. His work primarily focuses on culture, social satire, and technology.

Audiences last saw Jean-Baptiste on stage in Actually at Gablestage and on screen in the digital series Grown, which aired on COMPLEX Networks. This artist and his creative accomplice, Edson Jean, wrote, produced, and acted in the series after winning the Project Greenlight Digital Studio competition with Ben Affleck’s and Adaptive Studio’s support. They have gone on to write local feature films such as Ludi, an Oolite Arts supported project scheduled for release in 2021.

Jean-Baptiste is a proud alum of New World School of the Arts. He holds a BFA in acting. This artist is excited to work with Gablestage and honored to be an Engage Grantee. For more information, visit @joshjeanb.