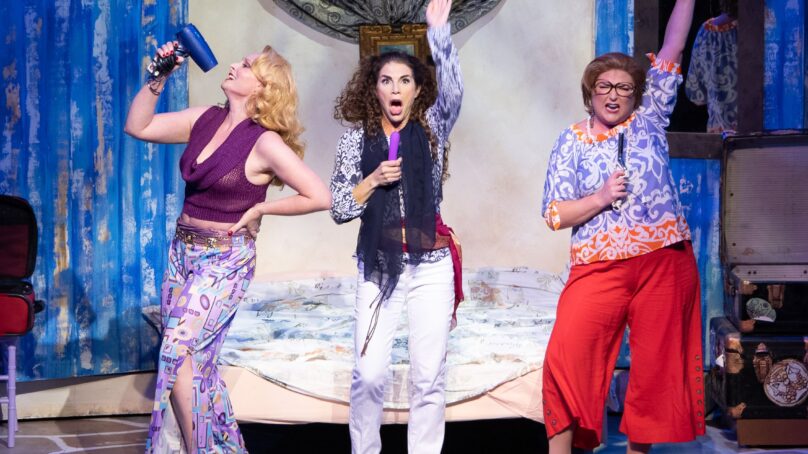 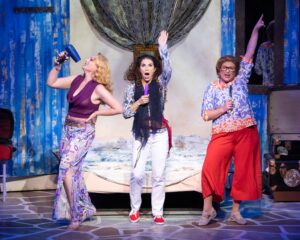 When Mamma Mia! opened on Broadway in October 2001, the entire country was hurting.

A little more than a month prior, the Sept. 11 terrorist attacks changed life forever. Certainly, theatergoers needed something light and comic to get their minds off the tragedy, if only for a couple hours. Well, Mamma Mia! was lighthearted and funny. Also, its catchy songs’ ability to invigorate and transport an audience was unquestionable. Further, many audience members probably recognized the songs from ABBA. Indeed, the Swedish pop/dance group, active from 1972 to 1982, and celebrating its 50th anniversary, is one of the most popular international pop groups of all time.

Flash forward to today, in Boca Raton, Fla. The world is once again hurting. This time, the source of pain is a pandemic that, while showing signs of dissipating, is not over. COVID-19 has created a new normal. Uncertainty in many areas has people on edge. And so, audiences, again, could use a lighthearted show to make them forget about the world’s troubles, if only for a little while. So, what show is Boca Raton’s the Wick Theatre producing following its roughly year-and-a-half closure due to the pandemic? Mamma Mia!

The jukebox musical, based on ABBA’s songs, is playing the professional, nonprofit Wick Theatre through Nov. 14. The Tony-nominated show – one of the longest running musicals in Broadway history — is receiving a convincing, vivacious, humorous, and splashy production.

Director Larry Raben, choreographer Stephen Casey, music director Eden Marte, and cast members ensure that show-stopping songs such as the title number, “Dancing Queen,” and “Voulez-Vous” all pulsate with high energy. The performers are spirited, without appearing to force anything.

The triple threat performers in this cast never settle for just singing the numbers. Instead, they act out the emotions behind the songs. Pre-recorded music accompanies the performers. The accompaniment, however, does not sound as rich and vibrant as a live orchestra.

Mamma Mia! has become a worldwide phenomenon. However, in case some people are experiencing the mega-popular show for the first time, some background could help.

The musical, set in circa 1999, takes place on an idyllic Greek island. A young woman, Sophie Sheridan, is about to get married. However, she does not know who her real father is. Of course, she strongly desires to know. And so, after reading the memoirs her mother wrote while dating and sleeping with several men, Sophie narrows down to three the men whom she feels are most likely her father. Sophie invites those men to her wedding, hoping to finally learn the real identity of her dad.

Playwright Catherine Johnson, who wrote the book for the musical, structured Mamma Mia! like an ancient Greek comedy. Specifically, Mamma Mia! assumes the style of an “Old Comedy,” which ancient Greek playwright Aristophanes made famous. In Old Comedies, one usually finds high spirits, song, dance, and buffoonery – all present in the musical.

But while Mamma Mia! has a thin plot, and is mostly energetic and humorous, look a bit further. You will find a touching tale of a mother, Donna, sending off her daughter, Sophie, into the world for the first time. This touching moment in the show comes during the song, “Slipping Through My Fingers.” In this production, Donna (Jodie Langel, who imbues her with an independent, free-spirited streak), and Sophie (a lively, charming, dreamy, and determined Meg Frost) tenderly sing the number. With a mother’s affection, Langel’s Donna gently brushes her daughter’s hair. Further, with a bright, fond smile, mom helps her daughter into her wedding dress. As Donna admires her daughter, the younger woman happily spins a couple of times, clad in the white outfit. The two hold hands, smile joyfully, and hug.

While Frost and Langel make it clear that Sophie and Donna love each other, the performers make the tension at times between them palpable. Sophie forcefully tells her mother that she wanted a steady father figure in her life. And she wants to make sure that Sky (a sincere Jeremy Beloate), the man she is marrying, will follow through on his wedding vows and never leave her.

While some scenes contain convincing tension and tenderness, director Raben ensures that an aura of playfulness and light-heartedness surrounds scenes that call for such qualities.

Some of the liveliness, bordering on rowdiness, comes courtesy of Donna’s long-time friends, Tanya Cresham-Leigh (a wild, flirty, fun-loving Aaron Bower) and Rosie Mulligan (a free-spirited Britte Steele, who is also touching in one of the show’s most poignant moments).

In addition to strong performances from actors playing the major characters, a lively chorus of supporting actors dance vibrantly and sing expressively.

Among the other stars of this production is projection designer Josieu T. Jean. Projections work best when they reinforce or complement, rather than dominate, the action in a show. In this production, the projections work well, for instance, during the song “Under Attack.” That is when Sophie feels overwhelmed following a nightmare. We see images of what look like bottomless pits in motion, as though someone were free-falling.  Perhaps that is how Sophie felt during her nightmare.

In addition, some projections reinforce the sense that the show takes place on a serene, idyllic island. A picture of a calm body of water, surrounded by greenery, adds just the right touch.

The projections nicely complement the detailed scenery. It consists of colorful, realistic-looking structures that easily slide on and off the stage.

Mamma Mia! is not perfect. For instance, Sophie sends three invitations to the men the day before the wedding. Surely the mail would not reach the men, who live in the U.S., within hours of Sophie sending it, allowing them to reply and arrive in Greece the next day.  And what is the chance that all three men would agree to attend the wedding of their former lover’s daughter? And we never find out who the real father is. In fact, by the end, Sophie does not seem to care one bit.

In the end, though, Mamma Mia! is a humorous, heartfelt, and relatable show bursting with big laughs, tender moments, energetic dances, and memorable songs. To borrow a line from the Gershwin brothers, “Who could ask for anything more?”

Cast members appear in a scene from the Wick Theatre’s vibrant production of Mamma Mia!

‘A Special Day’ awaits you at Miami New Drama