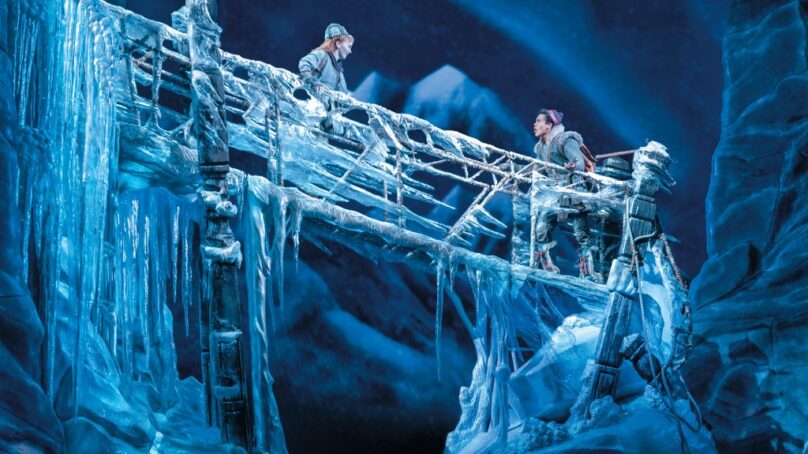 ‘Frozen’ the musical leaves you feeling warm inside 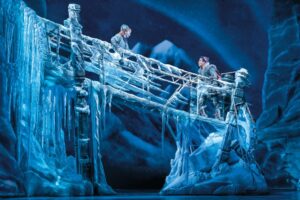 A frozen set is one of many visuals in an equity national touring production of Frozen.

There are plenty of visual delights and surprises in the captivating and faithful stage musical adaptation of Frozen to enthrall fans of the film.

In fact, during a recent performance in Ft. Lauderdale of the Equity national touring production of Frozen, audience members greeted magical feats with immediate applause.

But while, as is true with many Disney shows, you can expect a feast for the eyes, the musical also touches the heart. Indeed, Frozen, which is playing in Ft. Lauderdale through March 20 in a breathtaking, earnest, and energetic production, tells a touching story. It is one to which anyone who has lived in isolation during the pandemic should be able to relate.

Specifically, as in the film, two girls, Anna and Elsa, grow up as good friends who play well together. But after Elsa accidentally hurts Anna with her magical powers to turn objects into ice, a mysterious being physically cures Anna. In addition, the being wipes away any memories that Anna carried of her sister’s magical powers and her injury. Unfortunately, Elsa, whose powers are beyond her control, feels it is best to keep herself isolated from everyone to prevent herself from hurting anyone. If that sounds sadly similar to what we have had to endure for a good portion of these past two pandemic-plagued years, it is.

In the film, and the stage musical, Elsa remains isolated from others for about the same amount of time. She only re-opens the palace in which her royal family lives when it is time for her coronation as Queen of Arendelle.

While the visual extravaganza that Frozen the stage musical offers should keep young children happy and attentive, the live show is also noticeably darker than the film. As a matter of fact, certain scenes make the show look more like a Charles Dickens, Roald Dahl, or Tim Burton tale than one by Disney.

Fans of the film will be happy to learn that the movie’s memorable songs, including “Let It Go,” and “Do You Want to Build a Snowman?” remain in the play. However, the adaptation also features new songs. They include a number titled “Monster.” In it, Elsa wonders whether she is as awful as everyone thinks. Among the lyrics are: “Father, you know what’s best for me. If I die, will they be free? Mama, what if after I’m gone, the cold gets colder, and the storm ranges on?” It sure sounds intense for a Disney show, especially when you consider that she is singing to her dead parents.

Contrastingly, in the Oaken sauna scene, unlike in the movie, Oaken has his own song. Its title is “Hygge.” It is a word which essentially means that all things are happy and good. The song is an upbeat number to which Oaken, Kristoff, Anna, Olaf, and family and friends sing and dance. While the song does not advance the plot and repeats the word “Hygge” too much, it establishes the characters as optimistic and happy people.

For much of the film and play, Elsa is not a happy person, and for good reason. For one thing, she is unable to control her powers. As a result, the other characters basically consider her to be a witch. Meanwhile, Anna remains deeply hurt. Since she has no recollection of Elsa’s powers or her childhood injury, she cannot understand why Elsa consistently shuns her.

Fortunately, the sisters are likable people. Therefore, it is easy to root for them to get back together. And as in the film, we eventually learn the show’s villain is Hans. Of course, we become elated when Anna punches him, causing him to drown. That leaves the rest of the characters to live happily ever after. At the end of the stage musical, Anna also punches Hans. However, he does not appear to freefall to his death or drown. She merely knocks him down with a single punch. Therefore, it is a little hard to believe that Hans would not recover and fight back.

Elsa fights her powers for much of the first act, until its finale – “Let It Go.” It comes after Elsa has fled Arendelle and arrives at a remote location where, through her powers, she builds a palace made of ice.

The song offers Elsa a chance to let go of the tension she no doubt felt when she had to keep her powers in check. At this remote location, she no longer has to. And, so, she sings about letting go and allowing her powers to create as much ice as she can. Certainly, it is a freeing moment of release for Elsa.

In the fine touring production, an excellent Caroline Bowman, as Elsa, sings the song with her clarion and expressive voice. She begins singing the number in a soft voice. As the song progresses, Bowman’s voice grows in intensity until it reaches a crescendo. By this time, you marvel at how long this performer can hold a note and how well she emotes through song.

Before the number, Bowman imbues Elsa with authentic-sounding frustration, shame, tension, and wariness as she tries to keep people away from her and her powers in check.

In the live show, the “Hidden Folk” replace the film’s trolls. The former are Scandinavian folklore-inspired supernatural beings who resemble humans. They lend the story a mystical feel. And the fact that they help narrate the story imbues them with wisdom. In the show’s opening number, “Vuelie,” the characters, including the folk, chant the song, made up of nonsensical sounds. The number adds a ritualistic feel to the show.

Librettist Jennifer Lee includes narration from the beginning. The storytelling provides us with exposition and introduces the characters. At first, Lee presents Anna and Elsa as small children. Certainly, young children in the audience will be delighted to watch as the pair happily play with each other. During the opening night performance, Olivia Jones played Young Anna while Arwen Monzon-Sanders portrayed Young Elsa with convincing happiness and a carefree demeanor. During some performances, Victoria Hope Chan and Natalie Grace Chan – real-life siblings — will play the sisters as children.

The entire cast comprises triple threats. When they sing, a rich-sounding live orchestra backs them.

Caroline Innerbichler injects Anna with the kind of charm and cheerfulness that would endear her to just about anyone. In addition, the performer makes us feel for Anna when she feels hurt by her sister shunning her.

Fans of the film will recognize many of the same characters in the stage musical. They include Kristoff, whom Mason Reeves portrays with an easy-going aura.

Meanwhile, F. Michael Haynie lends Olaf, the snowman that Anna and Elsa built as children, playfulness and sweetness. In this production, the character appears as a puppet, although the actor portraying him is visible. Even so, we willingly suspend our disbelief. That is because Haynie lends Olaf contagious enthusiasm.

Jeremy Morse makes a conniving Weselton, while Austin Colby, at first, endows Hans with likable charm and sunny energy. Then, later in the show, Colby transitions seamlessly to play Hans as a villain, complete with an evil laugh. Colby alternates in the part with Ryan McCartan.

Collin Bala moves energetically as Sven the reindeer, alternating in the part with Evan Strand. And Michael Milkanin makes a cheerful Oaken.

The actors deftly execute Rob Ashford’s physical choreography, which includes cartwheels, and one performer lifting another and holding her upset down.

Director Michael Grandage has coaxed heartfelt emotions from the performers. In addition, Grandage often keeps performers close together. This reinforces a sense of community among the characters. Also, the director has created striking stage pictures.

Scenic and costume designer Christopher Oram has designed glistening, character-defining costumes befitting royalty. Meanwhile, his set includes tall, regal structures. They smoothly slide on and off stage, horizontally or vertically, ensuring smooth transitions between scenes. Watch, and you will see, among other things, an authentic-looking moon and real-looking snow.

Natasha Katz’s lighting focuses performers. Also, it nicely contrasts dark scenes from lighter ones. And the use of stage fog helps to create a non-realistic, mysterious environment.

Sure, there is plenty to see in the stage musical adaptation of Frozen. In particular, one image that is hard to forget is a tight hug between Anna and Elsa at the end. It reminds us what Frozen is ultimately about; the importance of love. Also, the hug can remind us how much we missed such contact during much of the pandemic.

The equity national touring production of Frozen will remain in Ft. Lauderdale through March 20. Performances take place at the Broward Center for the Performing Arts, 201 SW 5th Ave. For performance times and tickets, go to https://www.ticketmaster.com/artist/2559508?venueId=106543&brand=broward&camefrom=cfc_broward_web or call (954) 462-0222. This touring production will move north after departing Ft. Lauderdale. For information on future venues, go to https://frozenthemusical.com/tickets.