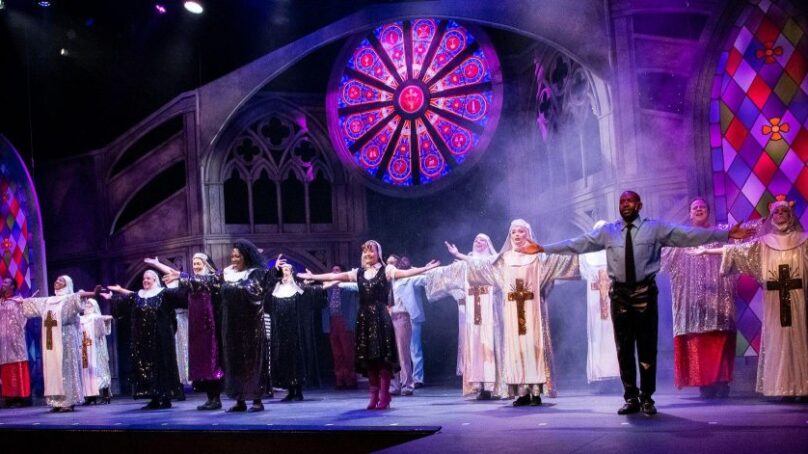 The cast of Sister Act is divine.

While you might not rush to buy the cast recording, the stage musical adaptation of the hit 1992 film, Sister Act, starring Whoopi Goldberg and Maggie Smith, nevertheless succeeds.

For instance, the live show features diverse songs that allow the characters to more fully express themselves. In addition, in the live adaptation, law enforcement officer Eddie Souther has extra incentive to protect the main character, lounge singer Deloris Van Cartier, from thugs. And, speaking of characters, the recognizable and relatable ones from the film are present in the charming, faithful (no pun intended), feel-good, and funny stage musical.

From now through March 6, the professional, nonprofit MNM Theatre Company, together with North End Theater Company and the City of Lauderhill, are presenting a spirited and polished production of Sister Act. The venue is the Lauderhill Performing Arts Center.

While the live show basically follows the film’s plot, the play is not a replica of its source material. Instead, the live show offers something new while remaining a soulful, refreshing experience.

As is true in the film, Deloris Van Cartier (Goldberg’s character in the film), is a struggling nightclub lounge singer who is having problems finding steady work. After she witnesses her gangster boyfriend kill somebody, police place Deloris in the witness protection program. Specifically, they hide her in a struggling convent in 1977 Philadelphia (the film took place in Reno and San Francisco).

At first, the outspoken and sassy Deloris is outraged that police placed her there. After all, how is she supposed to fit in in an old-fashioned convent with strict rules and a simple, rigid lifestyle? “You mean I gotta go incognegro?” the African American woman asks.

However, when the Mother Superior assigns Deloris (aka Sister Mary Clarence) to sing in the choir, she assumes leadership and breathes new life into the group. The choir’s success, in turn, draws more parishioners, which brings in more donations. But with the parish gaining exposure, will the convent be able to hide Deloris from the bad guys?

It does not take long for us to learn that the stage musical is not a replica of the fine film. Namely, in the adaptation, unlike in the movie, former classmates Deloris and Police Lt. Eddie Souther recognize each other as old friends from their school days. In fact, she has always good-naturedly called him “Sweaty Eddie,” since he often sweats. However, Eddie takes no offence and actually likes Deloris. So, he has an added incentive to make sure she is safe from her gangster ex-boyfriend. Cast member James White III believably plays Eddie with a likeability that endears us to the character.

The musical’s creators have deepened Eddie’s character by giving him a song titled “I Could Be That Guy.” In it, Eddie expresses a desire to be somebody other than awkward “Sweaty Eddie.”

Eddie is not the only character in the stage musical who wants something more from life. Another is the young Sister Mary Robert, whom Ariela Pizza portrays, at first, with a shy, quiet demeanor. And, to her credit, Pizza transitions seamlessly into an assertive, spirited young woman. The song “The Life I Never Led” helps to flesh out Sister Mary Robert’s character. Pizza sings the song with conviction and sincerity; you really get the feeling that this shy young woman radiates with desire and wants to be quiet and submissive no longer.

In the film, Smith plays the Mother Superior with a commanding and adamant aura, yet imbues the nun with grace and a very human vulnerability.

While Aleman’s Mother Superior possesses a stern, no-nonsense demeanor, she never comes across as a monster or an unlikable woman. Quite the contrary, this at-times wisecracking nun is stubborn and unbending because she is set in her ways and used to the old-fashioned ways of doing things. Indeed, change is hard for her. Like characters such as Fiddler on the Roof’s Tevye and Doubt’s Sister Aloysius, she can only bend so far before breaking.

Of course, the person who brings about change in Sister Act is Deloris.

While Goldberg, in the film, imbues Deloris with sass and charisma, Vallery Valentine brings her own brand of attitude to the part. In addition, Valentine infuses Deloris with a winning charm and a radiant personality, as well as confidence without arrogance.

In the movie, the Mother Superior tells the other nuns that Deloris is not actually a sister. But in the live adaptation, Deloris takes it upon herself to tell the sisters the truth. It makes her more respectable. Valentine’s Deloris draws people to her like a magnet. It is easy to see why the other nuns in the choir would listen to her.

Not listening to Curtis Jackson, a gangster and Deloris’s ex-boyfriend who tries to track her down, has consequences. Don Jose injects the character with enough menace to make the character seem threatening.

In the musical, composer Alan Menken (Newsies, Aladdin, Beauty and the Beast) includes musical styles such as Motown, soul and funk, disco, and Barry White inspired musical comedy. But while the live show features a score that is diverse and energetic, none of the songs stick with you. It is surprising that Menken, who composed sticky songs for shows such as the aforementioned, could not compose at least one truly memorable number in Sister Act.

Glenn Slater, a longtime Menken collaborator, penned the clever lyrics. Meanwhile, Cheri and Bill Steinkellner, with contributions from Douglas Carter Beane, wrote the humorous and entertaining book. There is no distracting material in the libretto, which grabs and keeps our attention from the outset.

Under Michael Ursua’s assured direction, comic and touching moments receive the attention they deserve. In addition, wisely, Ursua positions the actors playing the nuns close together to emphasize their solidarity with each other.

Anthony Campisi is the music director. Under his guidance, the cast members’ singing voices are versatile, pleasant, strong, and expressive. When the actors need to sound discordant as members of the convent’s struggling choir, they do.

A rich-sounding live band accompanies the actors without drowning them out. While there were sound problems a couple of times during the reviewed performance, the sound is mostly clear, a credit to sound designer Justin Thompson.

Clifford Spulock’s lighting not only illuminates and focuses the actors, but the lights move. Their mobility contributes to the production’s energy. The lighting is also appropriately bright for upbeat scenes, and darker for others. During the dreamy number, “I Could Be That Guy,” the lighting suggests a night sky with stars. In addition, stage fog helps make the lighting visible, but it seems overused in the production.

Penny Williams designed the eye-catching, character-defining costumes. Some of them glisten and are gorgeous. During one scene later in the show, the nuns, clad in white and combined with lighting effects, look ethereal as they pray.

For the convent, scenic designer Cindi Taylor has created a large, imposing, grey structure that deftly suggests the place’s severity. Other scenery conveniently descends or ascends, allowing for smooth transitions between scenes.

Jokes about nuns can grow stale. Fortunately, this musical mostly steers clear of them. Of course, there is a requisite joke about The Sound of Music. But there are other moments that are truly comical.

Sister Act, the film and the stage musical, is mostly escapist fare. It requires little to no thought from the audience. It is a comic musical treat that provides a welcome respite from the problems of the world.

If the show has a message, it is that we are all more similar than different. Certainly, it is a welcome message during these divisive times.

Sister Act runs through March 6 at the Lauderhill Performing Arts Center, 3800 N.W. 11th Place in Lauderhill. Performances are at 7:30 p.m. Thursday through Saturday, as well as 2 p.m. Wednesday, Saturday, and Sunday. For tickets, go to www.lpacfl.com or www.mnmtheatre.org. You can also call (954) 777-2055. 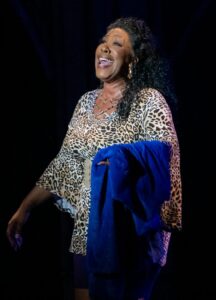 Boca Stage’s ‘Rx’ is just what the doctor ordered