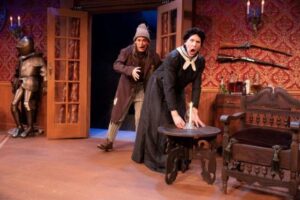 Comic brilliance is on display at Island City Stage (ICS). There, a side-splitting production of the hilarious 1984 spoof, The Mystery of Irma Vep, is offering a much-needed respite from the world.

The production runs through July 10 in the professional, nonprofit company’s intimate theater in Wilton Manors.

Folks, feel free to put away your thinking caps; you will not need them while watching the zaniness play out onstage. Indeed, Charles Ludlam’s camp comedy spoof of horror, farce, the penny dreadful, Gothic melodrama, and more is pure escapist entertainment. So, sit back, relax, laugh heartily and often (I guarantee you will), and enjoy.

Of course, a curmudgeon who delights in annoying others might wonder why ICS is mounting this show four months before Halloween. But there is no questioning the timing in the show. Specifically, under ICS Artistic Director Andy Rogow’s deft direction, the comic timing is near perfect. Indeed, each madcap blunder, gasp, glance, and exaggerated gesture seems spontaneous and occurs at just the right moment to achieve the desired effect.

If ICS’s cast and crew were aiming for belly laughs, they have scored multiple bull’s eyes judging from the reviewed performance. In fact, you barely recover from one hearty laugh when something else moves you again to uncontrollable laughter. Surely it helps that the performers never appear to “show off” or beg for laughs. Rather, they let the comedy spring organically from the characters and situations.

The program notes that the setting is “between the wars” in England, near Hampstead Heath (although it does not mention which wars). However, Ardean Landhuis’s scenic design suggests that the play takes place well before the time “between the wars.” Therefore, the many anachronistic references to modern times make us laugh. For instance, more than once, one of the actors advises audience members to “Google it” after mentioning something obscure from the distant past.

Two performers take on several roles in a show that requires dozens of wigs and some 35 costume quick-changes over the course of roughly two hours. You can’t help but wonder how the performers are able to change costumes so quickly, in a matter of seconds. Appropriately, after the two performers took their bows following the reviewed performance, a few other individuals also took bows. Apparently, their job is to help the performers change quickly.

As far as plot is concerned, the former mistress of an English estate (who may or may not be dead) haunts the place. Characters such as vampires, wolves, werewolves, ghosts, and mummies either populate the play or Ludlam references them.

Rogow directs with over-the-top comic energy, which is appropriate for a campy show such as The Mystery of Irma Vep.  Also, Rogow paces the show quickly. And the production’s resultant fast pace enhances the energy and comedy. Fortunately, the pace is not so fast that audiences cannot keep up.

Things seem to happen magically. For example, a fire suddenly appears out of nowhere. And where is the blood dripping down a portrait coming from? Indeed, it is a magical mystery, as mysterious as the titular character.

The framed portrait hangs on the wall in the library drawing room of Mandacrest, the Hillcrest estate near Hampstead Heath. Scenic and lighting designer Ardean Landhuis has designed the compact-looking room with details such as wall-mounted pistols, a mounted deer’s head, a knight’s coat of armor positioned like a mannequin (resembling the Tinman from The Wizard of Oz) and a volume of books on Egyptian mythology. A Victorian England escape room might come to mind.

The space looks inviting. There are candles, reddish drapes and wallpaper designed with patterns, a liquor bar, and fireplace. Also, some of the furniture conceals jail-like bars, behind which someone is kept prisoner. Part of the play takes place in Egypt, and Landhuis has done a good job placing us in that country with, for instance, a tapestry of Egyptian iconography.

Landhuis’s lighting design is darker during mildly horrific scenes, and brighter for lighter moments. As far as hues are concerned, the designer appropriately uses red.

The appealing period costumes, by costume supervisor W. Emil White, help to differentiate the characters. One of the costumes even matches the color of the wallpaper. Also, the outfits appear to be easy to move in and slip on and off. That is important, considering the number of quick costume changes in this show.

The supremely talented actors, South Florida theater veterans Larry Buzzeo and Bruce Linser, each offer a tour-de-force performance. Specifically, they seamlessly slip in and out of roles and make each of their characters seem different.

I have seen and heard Bruce Linser in real life. Here, he is unrecognizable as characters such as a wide-eyed, devout Irish housekeeper named Jane Twisden and an Egyptologist with an explorer’s spirit named Lord Edgar Hillcrest.

Meanwhile, Buzzeo brings a more sensitive, fragile, and flamboyant demeanor to his characters. Also, as swineherd Nicodemus Underwood, Buzzeo’s face seems contorted. Watch him as this character, and one of the tramps from Waiting for Godot might come to mind.

Keep in mind, though, that these characters are not necessarily whom they appear to be. Indeed, in this play you have actors playing characters. And the characters, in turn, are portraying other characters.

In this way and others, The Mystery of Irma Vep is a love letter to live theater. For instance, the piece includes references to playwrights such as William Shakespeare and Oscar Wilde. Also, one of the characters was a former actress. Speaking of the Bard, his enthusiasts might smile at the several asides during which actors briefly address the audience. By the way, if you are the shy type, you might consider sitting toward the back. The actors interacted with audience members seated closer to the stage.

The Mystery of Irma Vep premiered in October of 1984 at the Sheridan Square Playhouse in New York City. There, it played for two years, and remains Ludlam’s most popular play. In fact, in 1991, it was the most produced play in the United States.

The piece is a classic of LGBTQ+ theater, which makes it the kind of show ICS would mount. The company’s mission is to produce “quality professional theatrical experiences focused on the LGBT+ community for a universal audience.”

Ludlam himself was gay. His plays imitated a variety of sources, from gothic novels to film noir, and from pulp fiction to opera. His shows often contain cross-dressing, double-entendre, melodramatics and biting humor.

During the late 1960s, he founded the Ridiculous Theatrical Company, where he wrote, directed, and performed in almost every production for two decades. In addition, Ludlam created his own genre of theater – ridiculousness, into which The Mystery of Irma Vep falls.

In short, ridiculousness means beyond absurdism. It transforms melodramatic excesses and lowdown sight gags into high theater art. Without a doubt, with the talent on display at ICS, low comedy and camp become theater art of the highest order.

When The Mystery of Irma Vep premiered in 1984, the AIDS Epidemic had hit full force. As dark a time as it was, theatergoers probably needed to see a light and comic piece to make them forget their troubles.

Today, with everything going on in the world, the need for escapist entertainment is also great. So, as the emcee in Cabaret says, “Leave Your Troubles outside” and come to ICS. It will whisk you away to Mandacrest estate for a couple of carefree entertaining hours.