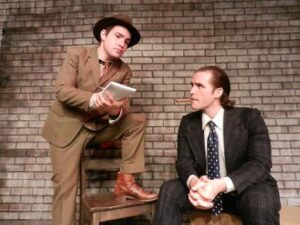 To kick off its 10th anniversary season, Island City Stage will mount a revival of the first play it produced — The Twentieth Century Way by Tom Jacobson. It will run from Oct. 1-Oct. 31.

“We’re revisiting the play that started it all,” Artistic Director Andy Rogow said. “The Twentieth Century Way not only still resonates today, but it serves to remind us of everything that we’ve always been about at Island City Stage; telling socially relevant stories that explore LGBT+ issues and history, with theatrical flair.”

To be specific, Jacobson’s play tells the true story of two actors. They hired themselves out to the Long Beach Police Department in 1914. The goal was to entrap what some people then called “social vagrants.”

The Twentieth Century Way “continues our tradition of presenting a combination of new work and classics, hilarious comedy and cathartic drama,” Rogow said.

Jacobson’s play is one of five works that ICS has planned for the upcoming 2021-2022 season. It also includes a Tennessee Williams classic, a send-up of gothic romance and horror films, as well as a play about being Black and gay in America today.

Looking back, David Gordon and Empire Stage, through a partnership a decade ago, planted the seeds for what is today ICS. Rogow said he “honestly couldn’t have imagined we’d be where we are today.”

Specifically, 10 years after its founding, ICS has “become the largest producer of non-musical plays in Broward County, with over 100 performances per year and a subscriber base of more than 500,” Rogow said. “Even through the last season, by far our most challenging, our patrons and artists stepped up to assure we could continue our work for another 10 years and beyond.

Rogow said he is overwhelmed by audience and donor support.

“Our audience has grown with us, allowing us to produce many new and often challenging plays that explore the full range of the LGBT+ experience; from serious subjects like racism, rape, gay marriage and sex addiction to lighter fare, including dressed in Joan Crawford outfits and Altar Boyz saving our souls with music.”

ICS’ location is in Wilton Manors, near Ft. Lauderdale. The nonprofit, professional company dedicates itself to “creating quality professional theatrical experiences focused on the LGBT+ community for a universal audience,” according to its mission statement on islandcitystage.org.

Currently, the company is in the midst of its ninth season. ICS just completed the in-person run of the play The Niceties. Now, people can watch the show virtually through April 25. To read a review of The Niceties, visit https://theatricalmusings.com/reviews-by-theater/ics-the-niceties-neatly-captures-the-zeitgeist. Following The Niceties, ICS will mount a production of a much lighter play — Bright Colors and Bold Patterns. For more information, visit https://islandcitystage.org.

Below is a closer look at ICS’s 10th anniversary season.