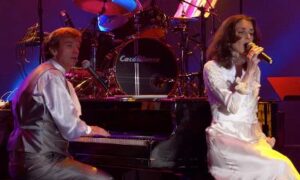 Ned Mills and Sally Olson will perform as Karen and Richard Carpenter this weekend in Southeast Florida.

The musical duo of Karen and Richard Carpenter and their band has captured the hearts of their fans from 1970-83 with 25-plus hit songs until the untimely death of Karen from anorexia nervosa in 1983.

All the Karen Carpenter tribute bands (I have seen 10 over the years) have captured Karen’s contralto-range voice in performing Carpenters hits. However, they lacked the one ingredient necessary to make the tribute show unique and memorable: a Richard Carpenter performer.

Sally Olson and Ned Mills, who call their band “Carpenters Legacy,” do not perform the Carpenters’ songs as themselves like other Carpenters tribute bands. Rather, they play the roles of Karen (Olson) and Richard Carpenter (Mills) as impersonators.

Olson started performing as a solo Karen Carpenter act near her hometown of Rutland, Vt. in 2015. Eventually, she felt she needed a dynamic Richard Carpenter to complete the recreation on stage of The Carpenters.

“Through contacts with mutual friends, I met Ned Mills in Las Vegas in 2018. Ned not only became Richard Carpenter, but his background as a musical arranger and composer gave our show a more authentic look and feel,” Olson said.

Mills has performed in Las Vegas as a Jerry Lee Lewis impersonator, worked as a pianist, arranger and musical conductor for The Ink Sports, The Shirelles, and “The Lawrence Welk Show,” among other performers.

All of Mills’ and Olson’s experiences on stage, including Olson’s flair in costuming and graphic design, and Mills versatility, especially in jazz arranging, have made their “Carpenters Legacy” enjoy a successful seven-year run in Las Vegas for the past seven years, working with the “Legends In Concert” company based in Las Vegas.

Their performances as Karen and Richard Carpenter in recreating their 1976 United Kingdom tour has earned the duo an award as “Best Impersonators” for the 2021 Best of Las Vegas Award.

“What a lot of people did not know about The Carpenters is how much Richard Carpenter contributed to their success. As a jazz arranger myself, I appreciate the great skill Richard has to arrange songs to match Karen’s contralto voice as well as dubbing talent to make Carpenters songs so magical,” Mills said.

Mills and Olson decided to recreate the 1976 United Kingdom tour on stage as the peak period of The Carpenters fame.

“The Carpenters were not only at their peak in 1976, but had the help of choreographers Ken and Mitzi Welch to transform their concerts from a delivery of hit songs into a stage show with comic interludes, banter between Karen and Richard, and a reinterpretation of their classic song ‘Close To You,’” Mills said.

Ken and Mitzi Welch were well-known choreographers who helped make many Carol Burnett and Barry Manilow television specials colorful. Along with performing Carpenters hit songs such as “Close To You,” “We’ve Only Just Begun,” “Goodbye To Love,” and “Superstar,” Mills opens the show with a tribute to Herb Alpert and the Tijuana Brass. Alpert was not only a performer, but was the executive at A&M records who presented Richard Carpenter with the idea of recording “Close to You.”

“Fans often see Richard Carpenter as the quiet behind-the-scenes person who was responsible along with Karen’s singing for their success. In the 1976 UK tour, Richard was more animated than in prior years and I showcase him performing classical music on piano and bantering humorously with Karen,” Mills said.

Along with Olson’s and Mills’ performance of Carpenters hit songs, other highlights of “Carpenters Legacy” include:

* A Spike Jones-inspired parody of “Close To You” rare comedy sketch from The Carpenters.

* A long drum solo by Olson (like Karen Carpenter, Olson plays the drums) in a medley of “Strike Up The Band” and “Fascinating Rhythm” by George Gershwin

Marvin Glassman is a past theater and cultural arts writer for 20 years with the Florida Jewish Journal weekly publication from Sun-Sentinel publication and for the past five years has been a contributing arts writer with the online publication miamiartszine.com. For the past 50 years, Marvin has been a fan of The Carpenters and has written reviews of other Carpenter tribute performers.