Broadway to return to West Palm Beach later this year 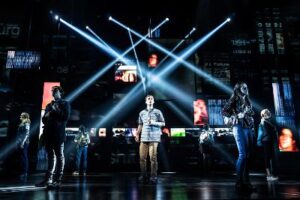 Dear Evan Hansen is among the touring Broadway shows that will play the Kravis Center during the 2021-2022 touring season.

Come November, and with COVID safety measures in place, the Kravis Center in West Palm Beach will welcome audiences back into the theater for touring Broadway shows.

Specifically, the 2021/2022  Kravis on Broadway season will open on Nov. 16 with the Tony Award nominated hit, Come From Away. The show is based on a true story about a Canadian town whose residents opened their hearts in the aftermath of Sept. 11, 2001. Come From Away will run in West Palm Beach from Nov. 16-21.

Then, Dear Evan Hansen will arrive in town. The multi Tony-Award-winning musical, about a high school student with social anxiety disorder who yearns to connect with his peers, will play the Kravis Center from Dec. 15-19.

In February 2022, the record-breaking Andrew Lloyd Webber musical Cats will climb onto the Kravis stage, and remain there from Feb. 8-13, 2022.

And Anastasia will be right behind the felines.  The show’s inspiration is the 1997 musical animated film. The stage show’s creators make up the Tony Award-winning team behind Ragtime.

Following Anastasia, the Lerner & Loewe classic, My Fair Lady, will grace the Kravis stage. Specifically, it will settle in for an April 19-24, 2022 run.

“Anyone who loves the theater knows the joy that comes from experiencing a live Broadway show. With this upcoming season of award-winning musicals, we couldn’t be more excited to share that joy with our community,” said Terrence Dwyer, Kravis Center CEO. “And as we get ready to raise the curtain on our line-up of Broadway hits, we’re also focused on ensuring the health, safety and comfort of our audiences through superior air filtering systems and state-of-the-art cleaning and sanitizing procedures in our theaters.”

Broadway’s COME FROM AWAY is a Best Musical winner all across North America. This New York Times Critics’ Pick takes you into the heart of the remarkable true story of 7,000 stranded passengers and the small town in Newfoundland that welcomed them. Cultures clashed and nerves ran high, but uneasiness turned into trust, music soared into the night, and gratitude grew into enduring friendships. Don’t miss this breathtaking new musical written by Tony® nominees Irene Sankoff and David Hein, and helmed by Tony® winning Best Director Christopher Ashley. Newsweek cheers, “It takes you to a place you never want to leave!”

A letter that was never meant to be seen, a lie that was never meant to be told, a life he never dreamed he could have. Evan Hansen is about to get the one thing he’s always wanted: a chance to finally fit in. DEAR EVAN HANSEN is the deeply personal and profoundly contemporary musical about life and the way we live it. The show has struck a remarkable chord with audiences and critics everywhere, including The Washington Post who says it is “one of the most remarkable shows in musical theatre history.” The New York Times calls it “a gut-punching, breathtaking knockout of a musical.” And NBC Nightly News declares the musical “an anthem resonating on Broadway and beyond.” DEAR EVAN HANSEN features a book by Tony Award winner Steven Levenson, a score by Grammy®, Tony® and Academy Award® winners Benj Pasek and Justin Paul (La La Land, The Greatest Showman), and direction by four-time Tony Award nominee Michael Greif (Rent, Next to Normal).

She was a girl from Boston with a voice from heaven, who shot through the stars from gospel choir to dance floor diva. But what the world didn’t know was how Donna Summer risked it all to break through barriers, becoming the icon of an era and the inspiration for every music diva who followed. With a score featuring more than 20 of Summer’s classic hits including Love to Love You Baby, Bad Girls and Hot Stuff, this electric experience is a moving tribute to the voice of a generation.

CATS, the record-breaking musical spectacular by Andrew Lloyd Webber that has captivated audiences in over 30 countries and 15 languages, is now on tour across North America!

Audiences and critics alike are rediscovering this beloved musical with breathtaking music, including one of the most treasured songs in musical theater—”Memory”. Winner of 7 Tony Awards® including BEST MUSICAL, CATS tells the story of one magical night when an extraordinary tribe of cats gathers for its annual ball to rejoice and decide which cat will be reborn. The original score by Andrew Lloyd Webber (The Phantom of the Opera, School of Rock, Sunset Boulevard), original scenic and costume design by John Napier (Les Misérables), all-new lighting design by Natasha Katz (Aladdin), all-new sound design by Mick Potter, new choreography by Andy Blankenbuehler (Hamilton) based on the original choreography by Gillian Lynne (Phantom) and direction by Trevor Nunn (Les Misérables) make this production a new CATS for a new generation!

Inspired by the beloved films, the romantic and adventure-filled new musical ANASTASIA is on a journey to the Kravis Center at last! From the Tony Award® winning creators of the Broadway classic Ragtime, this dazzling show transports us from the twilight of the Russian Empire to the euphoria of Paris in the 1920s, as a brave young woman sets out to discover the mystery of her past. Pursued by a ruthless Soviet officer determined to silence her, Anya enlists the aid of a dashing conman and a lovable ex-aristocrat. Together, they embark on an epic adventure to help her find home, love, and family. ANASTASIA features a book by celebrated playwright Terrence McNally, a lush new score by Stephen Flaherty (music) and Lynn Ahrens (lyrics) with direction by Tony Award® winner Darko Tresnjak.

From Lincoln Center Theater that brought you The King & I and South Pacific, comes “a sumptuous new production of the most perfect musical of all time” (Entertainment Weekly), Lerner & Loewe’s MY FAIR LADY.  Director Bartlett Sher’s glowing production is “thrilling, glorious and better than it ever was” (New York Times).  “Every so often a revival comes along that reminds you how indispensable great theater can be” (NY1). Boasting such classic songs as I Could Have Danced All Night, The Rain in Spain, Wouldn’t It Be Loverly and On the Street Where You Live, MY FAIR LADY tells the story of Eliza Doolittle, a young Cockney flower seller, and Henry Higgins, a linguistics professor who is determined to transform her into his idea of a “proper lady.”  But who is really being transformed?

AN OFFICER AND A GENTLMAN

AN OFFICER AND A GENTLEMAN, based on the Oscar-winning film starring Richard Gere, is a breathtaking production that celebrates triumph over adversity and includes one of the most iconic and romantic endings ever portrayed on screen. Featuring the Grammy Award® winning, #1 hit song Up Where We Belong, and a score based on the 1980’s catalogue of music that gave voice to a generation, the live stage production is a new adaptation by multiple Tony Award® nominee Dick Scanlan  (Thoroughly Modern Millie, Everyday Rapture), based on the original screenplay by Douglas Day Stewart. The musical is directed by Scanlan with choreography by Broadway sensation Patricia Wilcox (Motown, A Night with Janis Joplin). Zack Mayo’s got smarts and a body built for US Navy pilot boot camp, but he also has too much swagger… until he meets a drill sergeant who’s determined to drill his arrogance out of him. Zack finds comfort in the arms of a local factory girl. But it isn’t until tragedy befalls a fellow candidate that Zack learns the importance of love and friendship and finds the courage to be his best self and win the heart of the woman he loves. A sweeping romance that lifts you up where you belong. 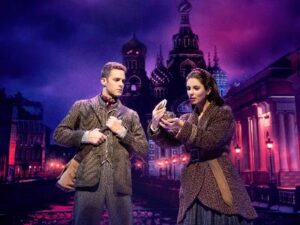