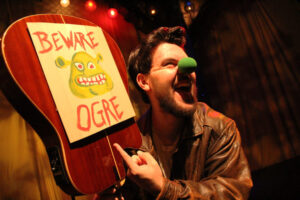 In the 2018 production, Shrek (Ryan Bauta) gives fair warning to anyone daring to enter his territory

It really isn’t easy being green.

In fact, in the fictional world, such characters as Wicked’s Elphaba, Jim Henson’s Kermit the Frog, and Shrek’s title character have demonstrated the challenges that greenness poses.

But at South Miami’s Area Stage Company, Shrek the ogre isn’t letting such challenges keep him from rising again.

Indeed, Area Stage will remount its critically-acclaimed, stripped-down 2018 production of Shrek from Jan. 22-31. Of course, things are different this time around. And so, Area Stage advertises the remount as a “safe and socially distanced return” of the company’s “uproariously imaginative, critically acclaimed, Mainstage professional production of Shrek the Musical.”

The company will perform Shrek The Musical at its brand new Outdoor Theatre in the heart of The Shops at Sunset Place — the company’s new home. Area Stage’s visionary associate artistic director, Giancarlo Rodaz, directs the renaissance theatre troupe-style, stripped-down production. It features seven actors and minimal design elements. The production’s basis is  the 2001 animated film from DreamWorks Animation. To read a review of Area Stage’s 2018 production of Shrek The Musical, visit https://theatricalmusings.com/reviews-by-genre/musical/minimalism-means-area-stage-companys-shrek.

The location of The Shops at Sunset Place is 5701 Sunset Drive in South Miami. Showtimes are 7:30 p.m. Fridays through Sundays. The run time is two hours and 15 minutes, including a 15 minute intermission.

Temptation to linger on Lincoln Road